Student takes on roles as assistant football coach for Bombers 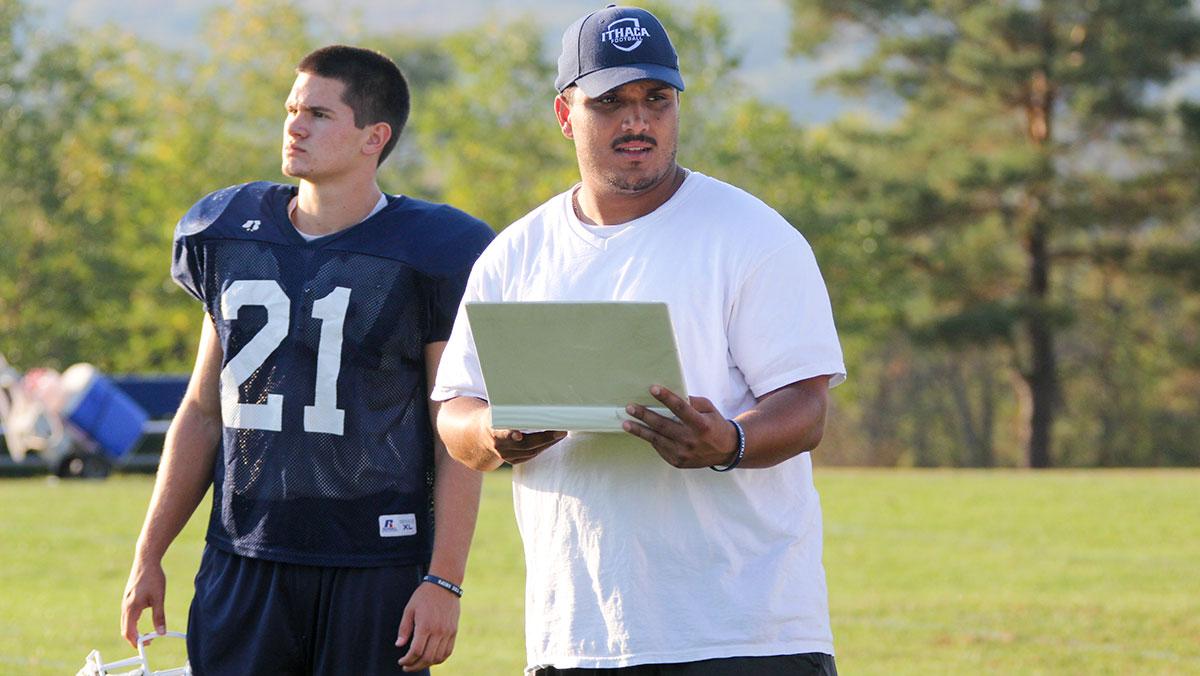 The loss to Hobart College last season in the first round of the NCAA Championship Tournament shut the book on a playing career in which senior linebacker Chris Williams compiled 151 total tackles, 19.5 tackles for loss and two interceptions. However, there was one last chapter in Williams’ football career left to be written.

After starting for three straight years for the Bombers’ defense, Williams hung up his helmet and pads in exchange for a navy blue cap and a whistle for the 2015 season.

Williams is working as a student assistant coach for the linebacker corps during his senior year. Williams was a part of the Exploratory Program for his first two years at the college, and last year he was majoring in physical education. He is currently finishing up the rest of his credits for his new major in sport studies.

Williams said the transition from player to coach was rough at first, but he has gradually grown accustomed to the new environment.

“I really wasn’t aware that there was so many types of computer software that the coaching staff use … [for] drawing up plays and editing film,” Williams said. “Every day that goes by I get more comfortable with the software and what is going on here. I’m starting to settle in.”

Williams said his ultimate goal is to become a higher-ranking coach at the collegiate level, and the football program’s lineage of success makes the college an attractive school to coach at.

“I want to be one of those guys where 30 or 40 years from now [the alumni] come back and are like, ‘Damn, he is still here?’” he said. “I love this city of Ithaca. I love Ithaca College. This is the place where you can be yourself. You really don’t have to worry about other people judging you … The winning tradition is second to none. I love the coaching staff. They make me feel like family, even though it’s my first year.”

Head coach Mike Welch said as a student assistant coach, Williams is participating in the football team’s graduate assistant internship, despite being an undergraduate student.

Prior to the beginning of the regular season, Williams spoke with assistant coach and defensive coordinator Mark McDonough, as well as the rest of the coaching staff, about what it takes to make it into the coaching business.

Williams said McDonough advised him of the challenge of managing the heavy workload that comes with being an assistant coach, which is a rare role for a student.

“He tells me you have to come in here and work hard,” he said. “Just because you’re not a player anymore, doesn’t mean that you’re not here to work and put forth your best effort. I try to come in and get done whatever he or any of the other coaches on the coaching staff ask me to get done. I try to do that to the best of my ability.”

“You are dealing with individuals that do not know you from a hole in the ground,” McDonough said. “They look at you and see basically the same person in terms of age … At the same time, making sure that there is a line between the players and the coach … Making sure that they know there is a line, that you are not necessarily their buddy, rather you are their coach.”

Because of this, Williams said it was difficult to gain the respect of the freshmen at first as well as adjust to coaching some of his former teammates and friends. However, he said he admires how the veteran players have recognized his authority as one of their coaches.

“They show me a different type of respect than they did when I was a player,” he said. “Because I was a player here, and that I started here for three years, it’s a little easier transition to get their respect than a brand new coach, someone that they have never met before.”

Senior linebacker Kyle Smith said he appreciates how Williams has maintained the same attitudes he had as a player as an assistant coach.

“As a senior leader, he was one of those guys where if he was pissed off, he would let you know about it,” Smith said. “Having that attitude as a coach is a great thing to have. We respond to it well because we know that’s the kind of guy he is and that’s what he expects from us.”

Williams said one of his proudest moments as an assistant coach came last weekend when the Blue and Gold avenged last season’s loss to the Hobart Statesmen.

“That was the team that ended my career,” he said. “If there was one game that I wish I could have suited up for one more time, it was definitely that one. I try to keep it out of mind. I try to put my work into these players. When I see them do something that I have spent all week coaching them on game day, it makes it all worth the fun. I get excited like I just made the play.”