Student transforms an old-fashioned word into a way of life 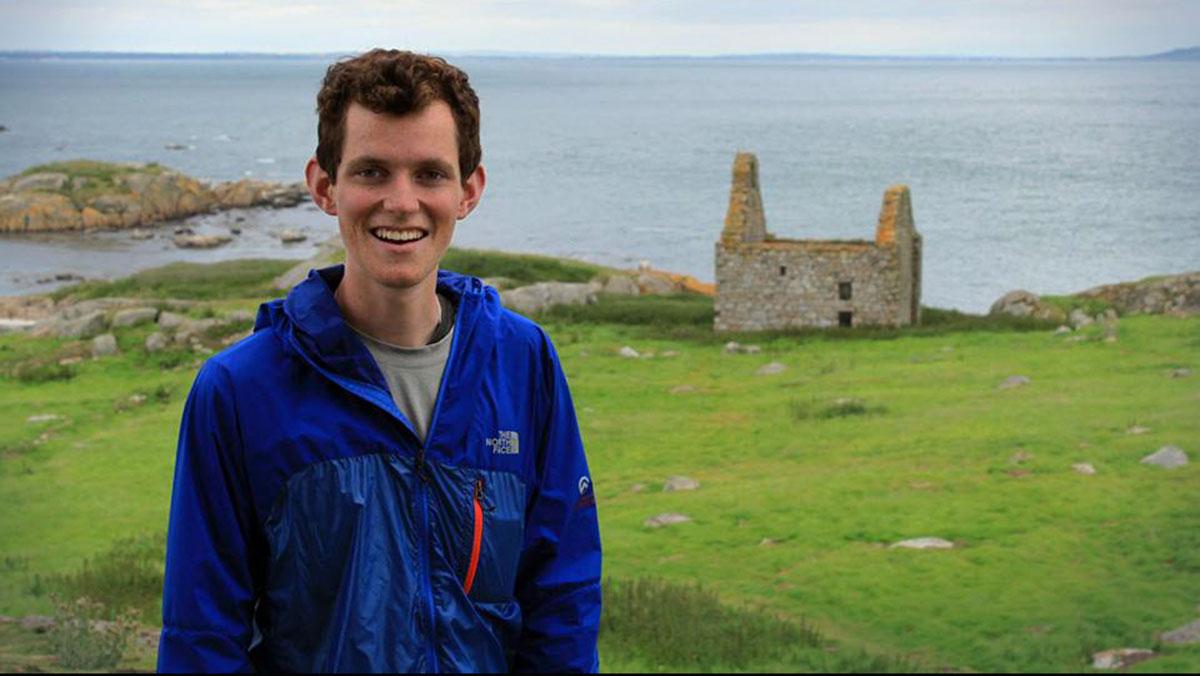 Courtesy of Brendan Davis
Brendan Davis poses for a picture while on a trip in Dublin, Ireland, during the summer of 2014. The word “ras” contains Irish Gaelic roots upon which Davis founded his philosophy.
By Kristen Gowdy — Senior Writer
Published: September 23, 2015

Senior Brendan Davis has two paces in his life.

The first is that at which he runs. It’s a steady pace, the constant pounding of cross-country sneakers against worn dirt trails. Davis is familiar with the rhythm, his acclimated muscles flexing melodiously in tune with the pack of teammates that surrounds him.

The second is that at which Davis strives to live. This pace is more complex than the easy strides of running. It is very difficult to describe, but that doesn’t mean Davis doesn’t try. He usually uses just one word: ras.

While “ras,” an Irish Gaelic word, literally translates to “race,” Davis interprets the word to mean “fast-paced.” And while ras could easily be associated with running, in Davis’ mind, the two are relatively different.

Davis works to be fast on the cross-country course, but to him, ras doesn’t mean “fast” in a literal sense. It’s not about quickness. To Davis, it’s conceptual. It means adventure. It means travel. It means telling stories and inspiring others.

Once ras had planted itself in the back of Davis’ mind, he wanted it to be something more. His mother is from Ireland and Davis is an Irish citizen, thus he feels a strong bond with Irish culture. For the moment, ras was just an idea. But he wanted to live it.

It began in a marketing class during Davis’ junior year of high school in Cornwall, New York. The assignment was to create a theoretical business and develop its marketing strategies. Davis saw the opportunity to invent something that he had been pondering.

“I didn’t really want to do products or anything,” he said. “I chose to make an outdoor company.”

He called it Ras Life.

While Davis’ marketing class ended, Ras Life did not. Combining filmography with his passion for the outdoors and being active, Davis began making videos that told other people’s stories and uploading them to YouTube.

“It started out just me and my friends basically just riding our bikes around,” Davis said. “Then we started skateboarding and making skateboarding videos. It just developed.”

When he and his friends began applying to colleges, Davis had frequent conversations with two of his closest friends: Matt McDonald and Kurt Karlson. It bothered them, the way that some of their classmates were picking their majors.

“I talked to other people about what they wanted to study, and they would always say, ‘This and that because it would make me a lot of money’ or ‘Because it was the safe thing,’” Davis said. “There’s no life in that.”

Where McDonald found his passion in painting and Karlson in music, Davis, an integrated marketing communications major, knew he wanted to make movies. But more than that, he wanted to inspire people to live the Ras Life. So he expanded beyond skateboarding videos and found a different way to embody ras.

As Davis grew up, so did his videos. He filmed on Wall Street. He profiled a local food truck. He made a two-part movie about a trip he took to the Dominican Republic.

And through these movies, he began to learn what it meant to fully live the Ras Life. 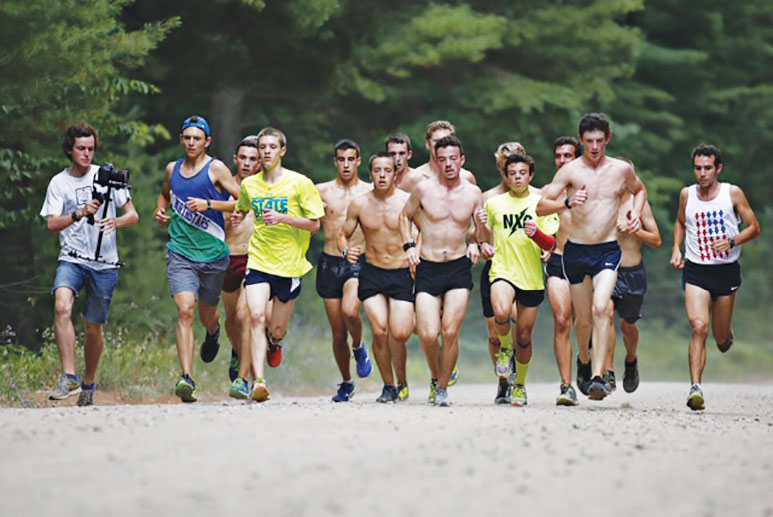 Davis, pictured on the far left, holds a video camera as he films runners for one of his movies. He has traveled across the globe to make these films.   COURTESY OF BRENDAN DAVIS

When he got to Ithaca College, the project only spread. While Davis competes with both the cross-country and track and field teams, he also finds time to film. He nearly always has access to a pocket camera, which he uses to record his day-to-day life and that of the people around him.

And during the summers, he travels. In 2013, he joined McDonald — who was studying art in Florence, Italy — and the two journeyed across Italy before traveling to Morocco. Davis had his camera on the entire time.

“I had a camera, too, and he made me film everything,” McDonald said. “We had hundreds of hours of footage, and he condensed it into about 10 minutes.”

That trip — the result of which was a 14-minute movie titled “Lucid Travels” — spurred Davis’ love for traveling so much that he spent this past summer in Costa Rica and Nicaragua.

Davis’ travels aren’t luxurious experiences. He said he works to find the least expensive flights possible, then finds cheap ways to travel around each country, such as staying with friends and occasionally catching a ride with a stranger — something that happened in Morocco.

Still, he did need some money for airfare and other small expenses. He said he funded most of his Costa Rica trip with $20 bills he had been saving up in a drawer since his freshman year of high school, and part of his Europe trip was paid for in coins he had been saving for years in a jar.

Through these non-traditional methods, Davis is able to immerse himself in the culture of each place he visits. It was in Costa Rica last summer that Davis felt most at home. He worked for a nonprofit company and spent his free time filming.

Davis said he wants to return to Costa Rica upon graduating because there, he found a different calling for Ras Life.

“It started out as filming all these great moments, these unreal moments,” Davis said. “I’m kind of trying to get away from that. I hate using the word ‘unreal’ because the moments I want to capture are the real moments. Those are the ones that inspire people. It’s not necessarily going skydiving, but it could be sitting on a porch in Costa Rica with a friend drinking coffee.”

That’s one of the biggest ways that Ras Life has changed throughout the years. It’s turned into interviewing residents at an elderly home, to speaking with teachers at his old high school.

And through this, he has affected those around him. Michael Flannery, Davis’ high school statistics teacher, said Ras Life has left a lasting impact.

“He’s got a good influence on some of the kids who are still in high school,” Flannery said. “Brendan’s encompassing that lifestyle. It’s just in him.”

Davis said Flannery has been an inspiration for the project’s continued existence. Along with being featured in Davis’ “Teacher Lectures” video, Flannery used to hand out Ras Life stickers to students he felt understood the concept. 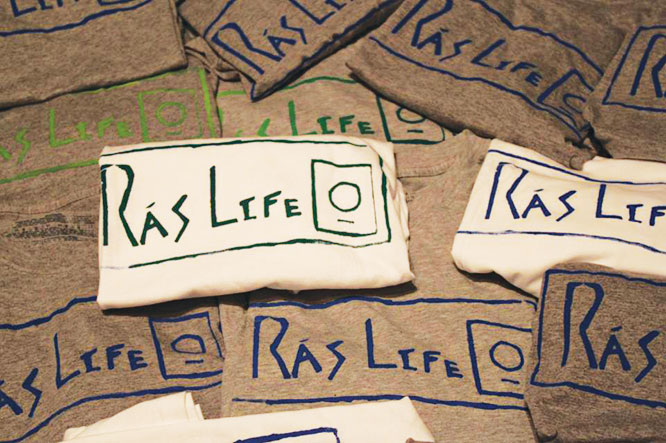 In addition to the stickers, Davis also handmade Ras Life T-shirts and sold them. As a result, he receives semi-regular contact from those who have been inspired.

“That’s probably one of the coolest things, is people telling me, ‘Oh, I’m going to Ghana for 10 weeks. I can only bring three shirts and Ras Life is one,’” Davis said. “There’s even people who have a Ras Life tattoo.”

No one really knows — Davis himself isn’t even sure — what Ras Life will turn into. Flannery thinks Davis could make a living out of it. Karlson, who makes the music for the videos, isn’t confident about exactly how it’ll change, just that it will. McDonald said he feels the same way.

“I think the idea will still be the same,” McDonald said. “I think Brendan has changed in that he’s really taken it upon himself to pursue his passion. He’ll follow it wherever it takes him.”

As for Davis, he just wants to continue to travel and to live the brand that has developed into a lifestyle.

“Something that I’ve really learned through the lens of Ras Life is just everywhere you go, people have the same end goal of being happy,” he said. “Some people have different needs to be happy. People are people wherever you go.”

Brendan Davis’ videos can be seen online at https://www.youtube.com/user/BrendanDaviz.