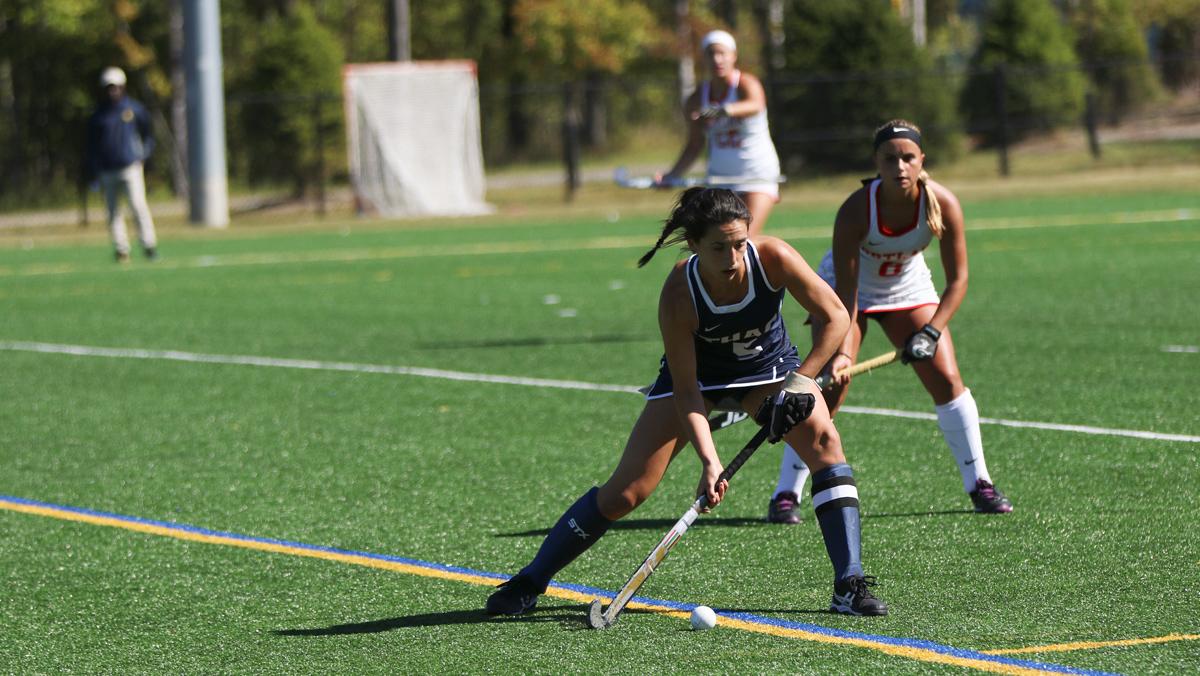 ELIAS OLSEN/THE ITHACAN
senior midfielder Amanda Schell looks to pass the ball while sophomore midfielder and back Hannah Burchell of SUNY Cortland looks to see what Schell does with the ball. The Bombers lost to SUNY Cortland 3–0 at Higgins Stadium Oct. 1.
By Max Prestwich — Staff Writer
Published: October 3, 2017

The Ithaca College women’s field hockey team was shutout by the SUNY Cortland Red Dragons 3–0 in a non-conference game Oct.1 at Higgins Stadium. With the loss, the South Hill squad falls to 6–4 overall and 1–1 in Liberty League play, while Cortland improves to 7–3 overall.

Coming into the contest, the Blue and Gold were riding high after a crucial come-from-behind victory against the St. Lawrence Saints at Higgins Stadium Sept. 30. Senior midfielder Amanda Schell and senior striker Michaela Donohue both scored to give the Bombers a 2–1 victory for their first Liberty League win of the season.

Despite this, the game Oct. 1 would not turn out the way the South Hill squad would have hoped.

The Red Dragons took the lead with only 2:33 played in the first half when junior forward Jess Gibaldi deflected a shot from senior midfielder Anna Branch into the bottom right corner of the cage.

It proved to be a lead that Cortland wouldn’t relinquish, as stout defense kept the Bombers to two shots throughout the entire length of the first half. Cortland on the other hand would finish the first half with nine shots, but the game remained 1–0 at halftime, courtesy of five crucial saves made by sophomore goalkeeper Savanna Lenker.

The Blue and Gold started the second half with a bang, as the Bombers had a plethora of opportunities to equalize in the opening ten minutes, including eight shots and seven penalty corners. Despite the chances, Cortland did not break on defense and Red Dragon junior goalie Kailynne Reinoehl kept the South Hill squad at bay with seven saves in the second half.

The Red Dragons used its strong play on the defensive side to inspire and motivate the offense to take advantage of the opportunities they were given. With less than twenty minutes left in the game, Cortland received a penalty corner and capitalized on it when junior back Dani Barto scored off a rebound.

Less than four minutes later, Gibaldi doubled her tally after ripping a slap shot that Lenker could do nothing about, which all but sealed the victory for the Red Dragons.

The Bombers’ next match is at 2 p.m. Oct. 7 against Skidmore College in Saratoga Springs, New York.