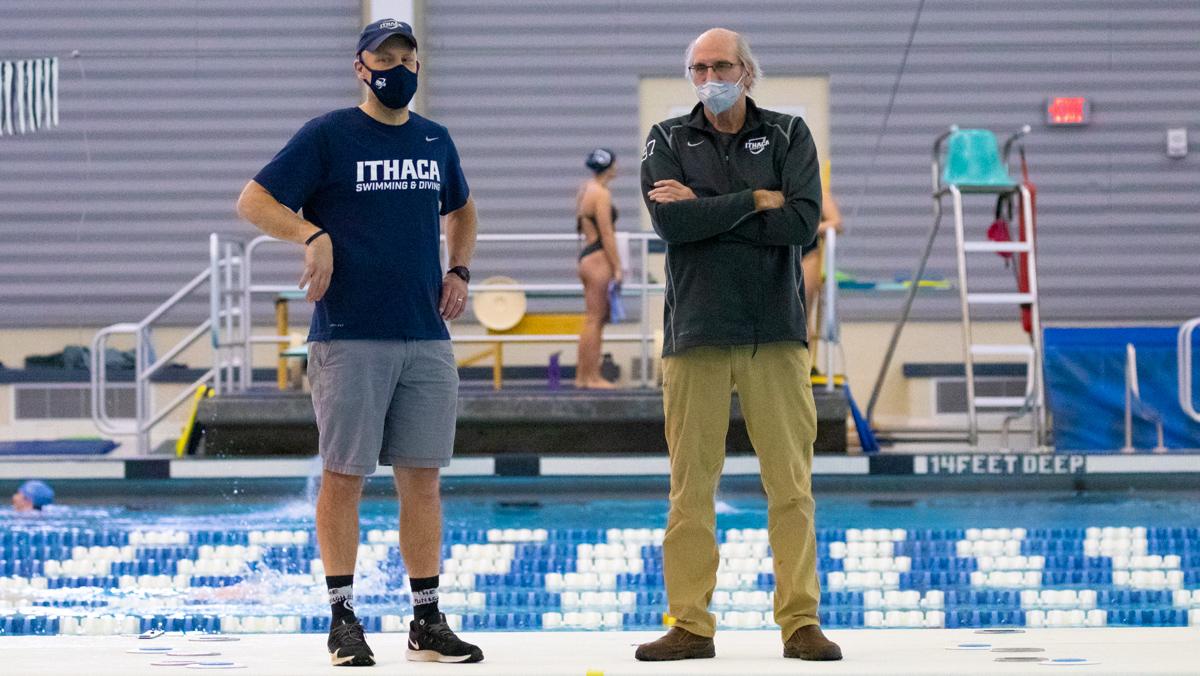 After months of being drained of both water and athletes, the Kelsey Partridge Bird Natatorium saw life again as Ithaca College divers were finally able to face an opposing team, Carnegie Mellon University, on Feb. 27. However, this meet looked different than any the team has competed in before. With the Bombers being the only ones on South Hill, and the opposing team being over 300 miles away in its own pool, fans watched the two teams compete next to each other on a Zoom screen rather than in the stands.

COVID-19 guidelines have left the Bombers training in pods based on where they live, sharing lanes with just one other teammate compared to the usual three to six and wearing a mask until the moment they jump into the pool and again the second they step out of the water.

Kevin Markwardt, men’s and women’s swimming and diving head coach, said the team has also spread out between four locker rooms, whereas each team would usually share one in the Athletic and Events Center. However, the challenges that COVID-19 presented the Bombers are not the only ones Markwardt and the team have faced.

When Paula Miller, former women’s swimming and diving head coach, retired from coaching after 36 years in June 2020, Markwardt was promoted to head coach of both teams. He and Mike Blakely-Armitage, assistant swimming and diving coach, are now the only two coaches for 70 athletes. Susan Bassett, associate vice president and director of the Office of Intercollegiate Athletics, said via email that there was no specific need to combine the two teams under one coaching staff, but this was a great opportunity to bring Blakely-Armitage as a full-time assistant for both programs.

Despite the obstacles that come with coaching two teams at once, Markwardt said the experience has been enjoyable because the men’s and women’s teams have been able to connect more than they did in past years.

“The teams have had a good interaction throughout the years, but there was obviously a certain amount of separation because you had two different head coaches,” Markwardt said. “What I’m enjoying is that there’s so much synergy when you have a men’s and women’s team. There’s a lot of things you can take advantage of and work together.”

Markwardt said the coaching staff has been working to find balance between wanting to push athletes while still being mindful of the stressors they face during the pandemic. When the Bombers first started practice, they had to undergo a five-week progression to ensure athletes would not get injured after being out of the water for so many months.

“As coaches, we have an innate desire to want to push kids, challenge them and give them the opportunity to be the best they can be,” Markwardt said. “Honestly, that’s had to be tampered with because as an athletics department as a whole, we had to recognize that kids would be out of shape. … We have had to embrace that, and not necessarily make changes, but emphasize other things like stroke technique, skills and team building.” 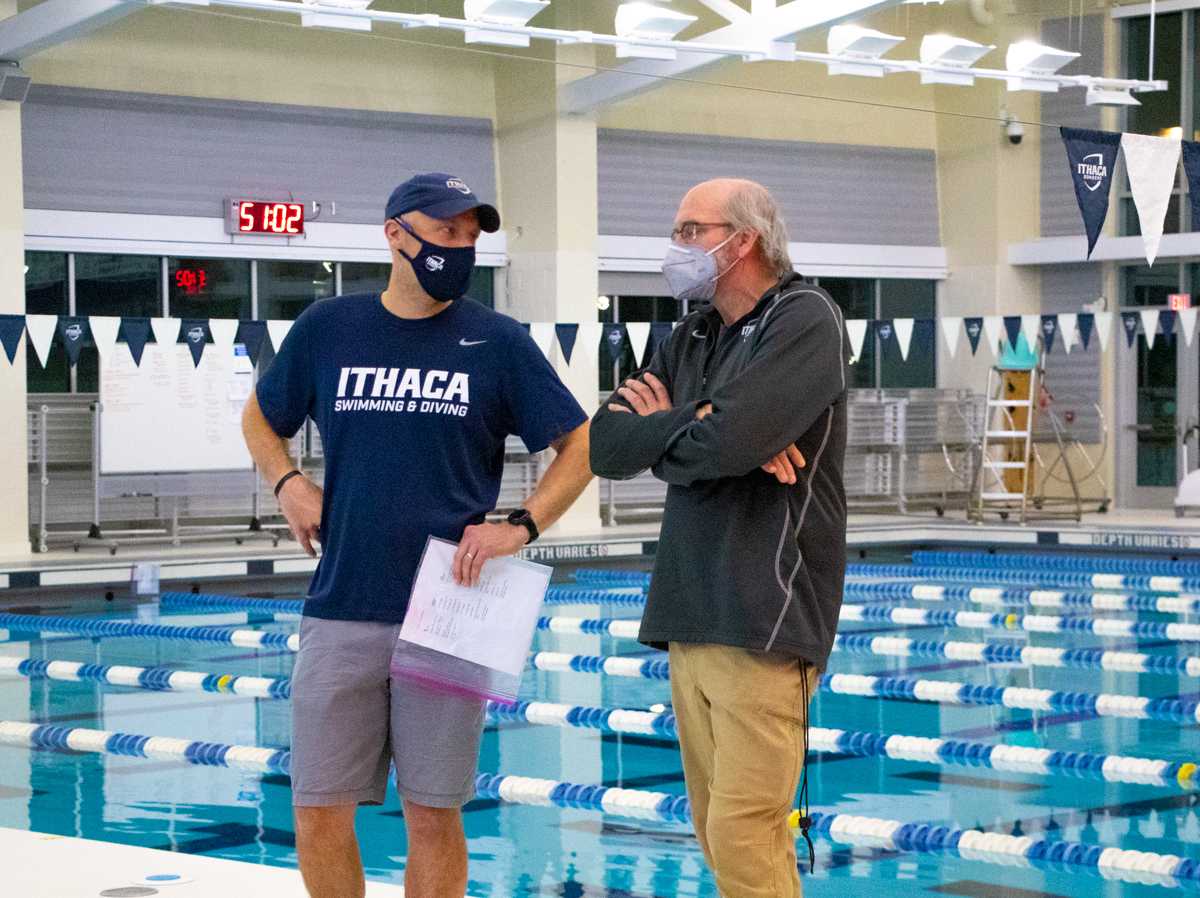 The Bombers have found ways to still compete despite the Liberty League winter sports competition and championships being canceled. The team has hosted two competitive events so far, including the Bombers are Back Time Trial on Feb. 20 and the Navy versus White intrasquad meet Feb. 27.

Senior swimmer Morgan Hoffman-Smith said that because of COVID-19 guidelines and social distancing, the Bombers have not really been able to see what it is like to have both teams train under one coaching staff.

“Both coaches are doing a great job and have provided us with everything we need and more, but they can only be stretched so far,” Hoffman-Smith said via email. “Having two head coaches and two assistant coaches in the past made it easier for teammates to get individual attention and time with coaches. … With a sport like swimming individual details matter. It is crucial for athletes to get that individualized attention. We need that constant attention, feedback and correction every time we hit the water. The coaches can only be at so many places at one time that it’s almost impossible to ask them to cover what we had last year.”

However, Hoffman-Smith also said this obstacle has given the upperclassmen on the teams step into a bigger leadership role and has helped the men’s and women’s teams become connected in the way Markwardt had said.

Blakely-Armitage said that while the teams do have separate identities, they do share some values — specifically the idea of the team being a family and developing a sense of togetherness. Both teams also said they wanted integrity and work ethic to be established in their cultures.

“I think taking some of the really great parts of each team and combining it into a sort of program philosophy has been a great thing about this merge,” Blakely-Armitage said.

Markwardt said the Bombers spent their fall Zoom meetings having discussions about the overall program’s culture. He said they did this during their time away so that the Bombers could focus on training when they got back to campus.

“We’re very conscious of Zoom fatigue, so we found it a challenge to keep working on team culture things where we can’t be in big groups, but we don’t want to overemphasize or overburden them with Zoom,” Markwardt said. “We got to be creative in thinking of ways to continue the culture and team–building part of it.”

Hoffman-Smith said team bonding has been a priority for the women’s team, along with finding ways to keep practice light and fun. She said the team has hosted Zoom game nights and gone on hikes together. However, she said training in pods has made building the women’s team culture difficult due to upperclassmen being separated from freshmen.

“For me, the first years are not in my pod, so I don’t really see them,” Hoffman-Smith said. “I haven’t really interacted with them, so it’s a little harder to create a more unified team culture that way.”

Senior swimmer Stan Zaneski’s experience with training pods has differed from Hoffman-Smith’s. He is the only senior in a pod of freshmen team members, which he said has given him a different perspective on the sport as his last season has not gone quite as he hoped it would.

“[The freshmen] are looking at this semester as a way to get ready for next season when they have their first season,” Zaneski said. “But in my sense, I’ve had to really analyze, ‘Why am I here? What am I getting out of this? What can I get out of this?’ I’ve essentially had to pull myself away from, ‘I want to swim fast and I want to do well,’ to ‘How can I support them and make this the best year possible for them?’”