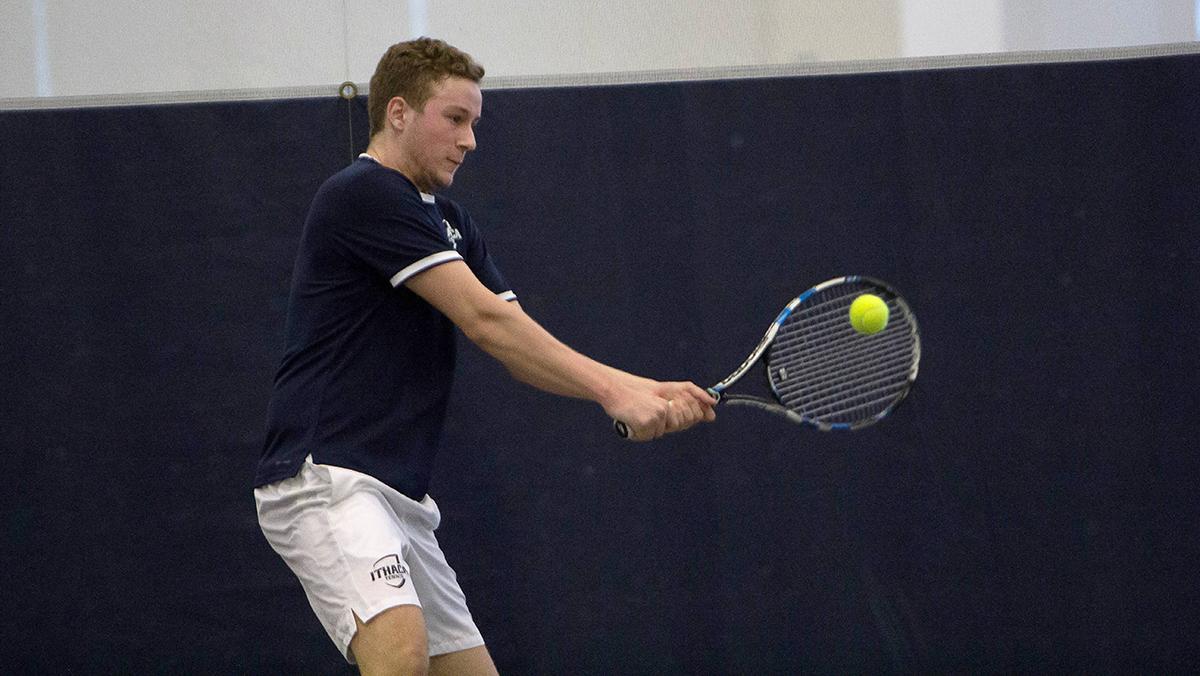 Bill Austin, head coach of the men’s and women’s teams, said he was proud of how both squads performed on the day.

“For the men, I thought it was solid,” Austin said. “It was a nice bounceback from last week up in Rochester. I thought the women competed really well. We had a shot at second dubs. We were down early, clawed our way back, … we had a real fighting chance to win five of those six single matches.”

The men won all three doubles matches and five out of the six singles matches as well. Senior Nate Wolf and freshman Colten Lavery collected the Bombers’ first doubles victory in the third-flight match 8–5 over Saints freshman Eric Tecce and sophomore Spencer Whitmire.

The Bombers continued their winning ways in singles play. Gardiner and Stavrakas won their matches handily 6–0, 6–3 and 6–1, 6–2, respectively. Stavrakas now has an undefeated record of 7–0 in single match play this season.

Lavery also triumphed in his singles match against Amendola in a two-set sweep of 7–5, 6–2.

Davis and Wolf both dropped the first two sets to their opponents Tecce and Solandt, respectively.

Wolf, who improved his record in singles matches to 6–1 with the victory, said the toughest moment in that duel against Solandt was after he fell in the first set.

“I was getting kind of frustrated with my game, and I wasn’t feeling as comfortable on the court,” Wolf said. “So I was really just kind of figuring something out. But I told myself to slow down a little bit and just take it one point at a time.”

Solandt said he has battled against Wolf on the tennis court several times since his freshman year. He said he noticed a difference in Wolf at the start of the second set.

“In the second set, he kind of came back out and seemed a little more focused,” Solandt said. “I starting missing a little more; got a little tight.”

The lone loss for the men’s squad came in the final match between freshman Max Prestwich and freshman Alec Roslin. The match went to a third set where Roslin defeated Prestwich 10–7.

As for the women’s team, the Bombers struggled in doubles match play and lost multiple singles matches by tight scores.

Greg Kreitzer, head coach of the St. Lawrence women’s team, said he was impressed with how the squad competed in singles play.

“I think it was good to see a lot of people were down and were able to work through their matches,” Kreitzer said. “How they responded … that was good.”

St. Lawrence’s next victory arrived from the first-flight match. Senior Georgia Comer and sophomore Alexandra Dadoly also won by the score of 8–3 over senior Haley Kusak and sophomore Caroline Dunn.

The Saints wrapped up doubles play after sweating out a close match against freshman Brianna Ruback and sophomore Taylor Ginestro. Saints senior Hallie Young and junior Emily Wyman won in the 5–0 breaker.

The Bombers won the first two singles matches with ease. Kusak and Ruback both defeated their opponents by the scores of 6–1, 6–2, respectively. Both players now own records in single play of 14–2 and 13–2, respectively.

After dropping the first set 6–3, Wyman won the next two sets by the scores of 6–2 and 6–2 to defeat Grosberg.

Peterson defeated freshman Jane Alkhazov 4–6, 6–4 and 10–0, and sophomore Carly Jefferson won over Ginestro 7–6, 7–5 to close at the meet.
The men’s team will play their next match against Bloomsburg University on March 13 when it travels to Orlando, Florida. The women’s squads next meet is against William Smith College at 11 a.m. March 5 in the Athletics and Events Center.