This past year has been challenging for freshman tennis player Jack Melhorn, as he has been getting used to life nearly 9,000 miles from his home of Nonthaburi, Thailand. However, Melhorn said he has found a new home at Ithaca College: the tennis courts. 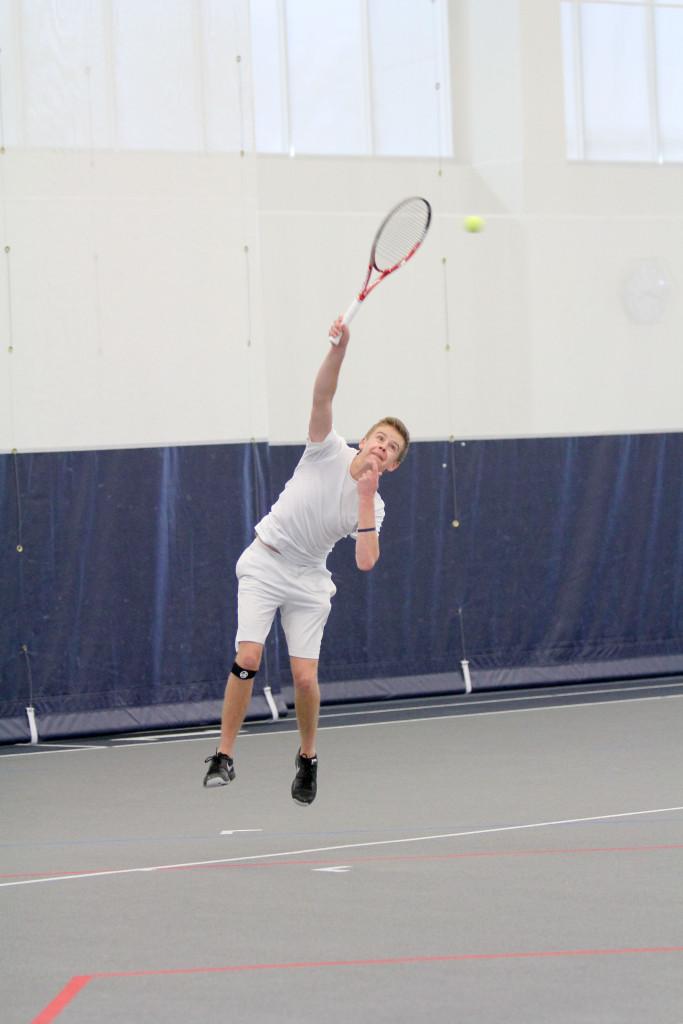 “The hardest part about being an international student is that you’re so far away from your immediate family,” he said. “But the team has kind of stepped in and have been like my new family here.”

A lifelong athlete, Melhorn said his father taught him to play tennis — his favorite sport — when he was young. He has been playing ever since.

The sport is something, he said, that has helped him make the transition to a new college — and a new continent — easier. Melhorn said the biggest difference between the U.S. and Thailand is the pace of life.

“Thai people are very easy-going, go-with-the-flow kind of attitude, whereas I’d forgotten how fast-paced the U.S. can be sometimes,” he said.

Head coach Bill Austin said Melhorn’s teammates have been important because the freshman has been adjusting to a life that is very different from the one he left.

“He’s had different experiences than the guys growing up,” Austin said. “His culture and his experience are something that the guys are interested in.”

The team is also interested in Melhorn’s skills. Upon the conclusion of the team’s opening match, the Ithaca Invitational tournament in September, 2014, Austin said he knew Melhorn would be an invaluable player. On Sept. 6 and 7, 2014, he won all three of his singles matches and one out of the two double matches that he played. Over this past season, Melhorn has defeated the No. 1 players at Alfred University, Hobart College, Saint Lawrence University, Kutztown University, Rhodes College and Bloomsburg College.

These wins have propelled Melhorn into the No. 1 singles spot on the team. As a freshman, Austin said this is a great accomplishment but one that brings with it a huge role and responsibility. Austin said there’s some pressure on him and that he has handled that tremendously well.

“As the top of the lineup, people are, whether you are a first-year player or a senior, the guys are taking their cues a lot from the guy that’s playing at the top,” he said. “Right now, he’s leading by example because he’s working hard.”

Ever since stepping out onto the court, Melhorn said he has never stopped working hard, which is something that has helped him earn his spot at the top of the lineup. He said he treats each practice as if it was a real match. Austin said his willingness to compete and get better is a good sign for his future because it will make him a more complete player down the road as he progresses into his upperclassmen years.

On April 4, Melhorn faced his first big challenge when he squared off against the No. 2 men’s tennis player in Division III. Melhorn eventually fell 3–6 and 2–6 to junior Matthew Heinrich of Stevens Institute of Technology. The Bombers’ oldest player, junior Chris Hayes, said despite Melhorn’s loss, the test for the rookie will make him stronger in the long run.

“When you play better players, you’re always going to get better as the season goes on,” Hayes said. “He has come right in with that willingness to compete and get better. How many freshmen can come in and just play No. 1 singles and have that mindset? It’s not easy.”

Melhorn, on the other hand, is looking past the match with Heinrich and into the future. He said his eventual goal is to beat Heinrich next year.

“I think the match went well over the weekend,” he said. “I thought I hung with him well enough so that hopefully I can challenge him in the future.”

Melhorn’s play has given the Blue and Gold high aspirations for the foreseeable future. Austin said he wants to see him continue to grow as a player and an individual.

“We’ve got a little more than a month left of the regular season … I expect and he expects himself to be better at the end of April than he was on the first of April. To continue that growth, to continue to understand his game and others’ games, and to get stronger … is what I expect of him.”

Hopefully, Melhorn said, this development will help him to achieve another goal of his: making nationals as an individual by junior year. In addition, beating Stevens Institute of Technology is something he said has been on his mind, as the team has not defeated its rivals in four years, including five consecutive losses in the Empire 8 Championship game.

Austin said this goal is attainable, especially as Melhorn continues to adjust to his role on the team.