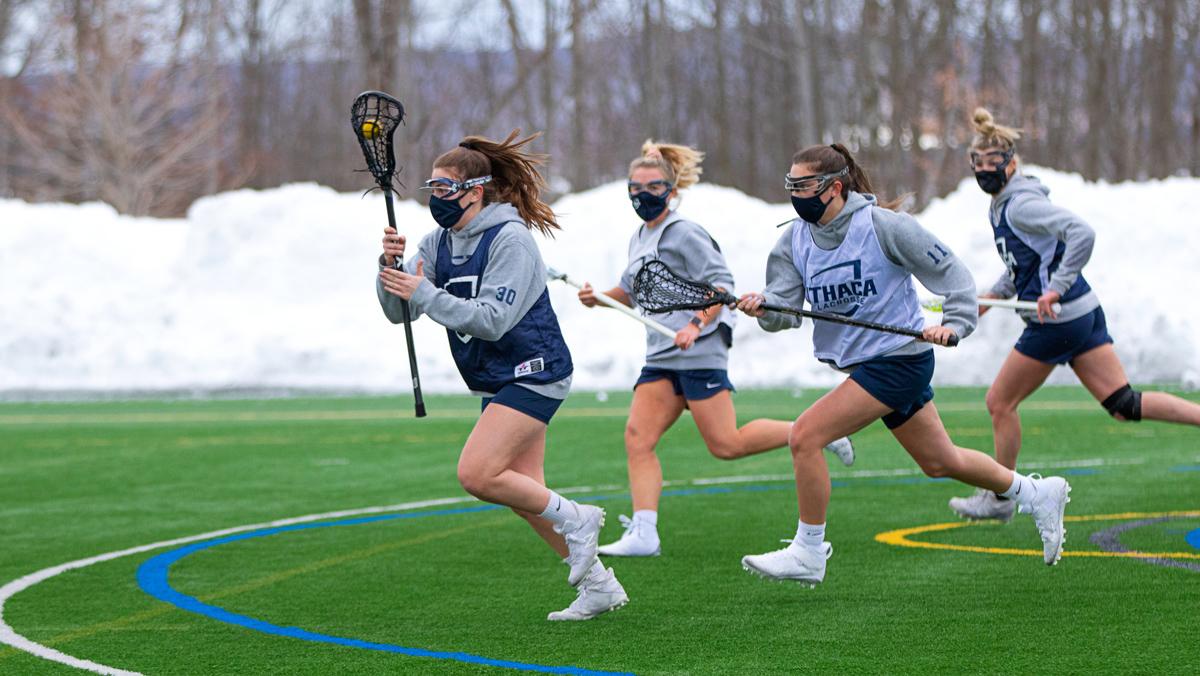 Most athletes have a pregame, pre-match or pre-competition routine, whether it be wearing their hair in a special style, listening to a specific song or even putting on their shoes and socks in a certain fashion. With athletics finally returning to Ithaca College after almost a year away, athletes are adding new elements to their routines: masks, practice pods and COVID-19 tests.

The Bombers are facing challenges they never experienced before, like practicing in smaller groups, tweaking drills for athletes to be six feet apart, avoiding locker rooms and finding ways to connect with new team members without being together physically. Coaches and athletes have been finding ways to overcome these obstacles since stepping onto campus in January.

Although the Bombers are not competing in winter sports, they are practicing. There has been discussion of competing locally, but the college’s Office of Intercollegiate Athletics has not yet made a decision regarding that. Prior to starting practices, athletes had to get tested for COVID-19 and quarantine. Athletes coming from contiguous states only had to quarantine until they received a negative result, but those from noncontiguous states had different requirements.

Senior lacrosse player Indira Varma is from Menlo Park, California, and said she had to arrive in Ithaca before her teammates because she had to quarantine for longer than most. She said she quarantined for four days and started practicing a day after her teammates once she was cleared.

For some Bombers, training looks much different than it did prior to the pandemic. Junior lacrosse player Connor Brumfield said the team has been practicing in three pods that are based on who lives together. He said the first two weeks of practice consisted of noncontact drills, like passing and shooting, but the Bombers have since been able to implement small group contact drills like one-versus-one player scrimmaging.

For junior pentathlete Logan Bruce, women’s track and field practice has been reorganized to fit NCAA return–to–play guidelines. The pentathlon consists of five events: 60-meter hurdles, high jump, shot put, long jump and the 800-meter run. Bruce said she would usually train for multiple events in one practice and would even come early to train in events she may not have time for during practice, like shot put. However, with the NCAA placing restrictions on training intensity in order to protect athletes physically as they return to training after months off, Bruce said multi-event athletes have been focusing on just one event or conditioning each practice.

She said this has helped her focus on little details in events that she did not have time for before.

“It’s nice to spread it out a little bit more,” Bruce said. “Now we can actually do throwing drills and focus on that. … Last year was like constantly doing a million things and very hectic, but now you go in, you have one goal, you get to do that and then you move on.”

Practices look especially different for contact sports like wrestling. The Bombers usually train in their own wrestling room, but this season junior wrestler Logan Ninos said the team has transitioned into the Ben Light Gymnasium to have more space. In a normal season, wrestling would have full-contact practices almost every day, but this year Ninos said he and his teammates have noncontact practices on Mondays and Thursdays — the days that they take COVID-19 tests — that consist of weight lifting, conditioning and other noncontact wrestling drills. Contact practices are on Tuesdays and Fridays based on their test results.

He also said the team is able to have contact practices on Wednesdays because wrestling is the first team to utilize the college’s rapid–testing system on this day. Ninos said the wrestlers sign up for appointments with Jessica Gammons, assistant athletic trainer, to have a nasal swab test done rather than a saliva test. They then receive their results that same day before going to practice.

Katie Sheehan, clinical instructor in the Department of Exercise Science and Athletic Training, said the athletic training staff is planning to use antigen tests for spring sports if teams have postseason competition.

The Bombers are split into two larger pods — one for wrestlers living on campus and one for those off campus — and then into two smaller pods within them. The smaller two are based on wrestlers’ weight classes. Ninos said that despite all of the change, it felt good to be back training again.

“It was good to be back,” Ninos said. “It was definitely weird and is going to take some time to get used to, but it was nice.”

Men’s crew head coach Dan Robinson said off-season winter training has also looked different for his team. Normally the team can fit 40 athletes in the Robert B. Tallman Rowing Center, but due to social distancing guidelines, only 18 people can train there at once: six athletes upstairs and 12 on the main floor.

Robinson said his main priority is having athletes get comfortable rowing on machines again. The Bombers were able to train on their own at home, like running, stretching and calisthenics, but not everyone had access to ergs. Robinson said that despite the off-season usually being the toughest training session for the Bombers, the team came back excited.

“The athletes are very enthusiastic,” Robinson said. “Normally winter training during the regular year is a low point between seasons, and it’s a grind training on machines rather than boats. This season they came back and were like, ‘This is awesome. We get to hit the machines and grind,’ after not doing anything for ten months.”

While practices have looked very different for sports like track and field and wrestling, some sports have been lucky to not face as many changes. Senior baseball player Jack Lynch said coaches have created the team’s pods based on their positions — pitchers, infielders and outfielders — which is typically how they would be separated.

Junior softball player Julia Loffredo said that because softball is a naturally distant sport, social distancing guidelines have not affected the Bombers’ training very much.

“We’re trying to make things as normal as possible with being safe,” Loffredo said. “We’re all six feet apart, and with softball we’re normally like that anyways, except with huddles and team meetings. That’s really the most that’s changed. We can’t go in and say a cheer or give each other high fives because we’re all apart, so it’s pretty much the same, just a little unconnected, but we find our ways.”

It has been especially important for the Bombers to find ways to connect with new team members who are stepping foot on campus for the first time. Sophomore basketball player Liam Spellman said that usually the team would spend time together in the dining hall or at each others’ houses. He said he feels he has stepped up as a leader to help freshmen become accustomed to the team and the college.

“I know I am an underclassman, but I’m an energetic guy, so I try to voice my opinions too,” Spellman said. “It’s tough on the freshmen because they are coming into a whole new experience where it’s tough to meet new people, but we try to bring that [energy] out of them and make everyone feel comfortable.”

Freshman basketball player Triston Wennersten said COVID-19 guidelines have made it difficult to adjust to a new team, but being able to practice has made the transition much simpler.

Bruce said her responsibilities as a captain changed this year without fall practices, which are usually run by the track and field captains. With new guidelines to follow and routines changing daily, she said she is leading by example.

“I can’t preach certain things to the team or try to hold the girls accountable if I’m not holding myself accountable,” Bruce said.

Despite the 2020 spring, fall and winter seasons being canceled and the uncertainty of the upcoming spring athletics season, the Bombers have come back to campus excited for the opportunity to train again along with finding ways to keep practices fun. Spellman said the basketball team has been incorporating shooting competitions into its practices as a way to keep training fun while still staying safe. Lynch said the baseball team is using the uncertainty of its upcoming season as a reason to appreciate practice.

“We might not play, and even if we don’t, at least we’re practicing,” Lynch said. “We’re having fun, joking and playing baseball again. We’re just hoping that we play. I think we got a good squad this year, so if we do play, it’ll be a good season.”