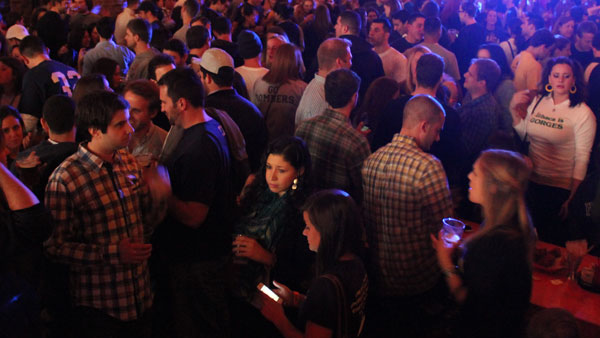 With Bomber sports comes Bomber tradition, especially with football — and nothing says tradition at Ithaca College quite like the Cortaca Jug. In recent years, alumni from SUNY-Cortland and the college have found a way to keep the party and spirit of Cortaca alive.

The new tradition began in 2006 in Los Angeles when Rand Geiger ’06 and Dan Shott ’06 decided it was unrealistic for them to return to Ithaca for one weekend to celebrate Cortaca. They still wanted to celebrate the beloved rivalry between the Bombers and the Red Dragons, so they invited friends over to relive their time spent at the college and delegated the name “CortaCal.”

Geiger said even though the college has a much smaller sports program than a Division I school, it’s difficult to ignore Cortaca.

“We wanted to start an LA tradition, and when Cortaca came around it was sort of a no-brainer,” Geiger said. “My friends who go to [Division 1] schools stay attached to their schools through athletics, so we thought we would try to carry on the athletic tradition out here with the one big sporting event we participated in.”

The 2006, CortaCal began as a house party with about 10 alumni wearing homemade T-shirts, drinking from a keg and listening to a stream of the game’s radio broadcast. With the help of Pete Berg ’07, Ram Calley ’07 and a few other Ithaca grads, the intimate gathering rose to a larger party of 35 in 2007, and now the event is open for college alumni and students in the ICLA program.

Shott said going from a house party to more than 300 people in one of Hollywood’s biggest bars says a great deal about the meaning of CortaCal to students and alumni on the West Coast.

“I have always found it pretty amazing that a liberal arts school in Central New York can pull together 300 alumni on a random Saturday in Los Angeles,” he said. “It speaks volumes to the Ithaca community out here.”

For CortaCal 2013, the organizers have worked together to create a “Baywatch” inspired CortaCal at 33 Taps, a bar in Hollywood. They worked to publicize the tradition via Facebook, Twitter and email to spread to students and graduates.

The organizers broadcast the game on screens in the bar through the ICTV online stream and create a lip dub to celebrate the event. The organizers keep the bar up and running for two hours before and after the game, and they also sell T-shirts, which are always in high demand.

Back in 2009, one of the LA contributors, Jared J. Smith ’06, moved to New York City and found there was not an event like CortaCal on the East Coast. Some alumni travelled back to Ithaca for the game because they were in close proximity, but Smith said he decided to put something together for the New York City area anyway.

“When you can’t make it back, it’s awesome to have an event that people can go to and experience the same type of Cortaca experience,” Smith said. “This is the type of tradition that doesn’t have to end just because you are leaving Ithaca.”

This then sparked the idea for NYCortaca, and the broadcast now reins in more than 800 Ithaca and Cortland alumni to watch the jug competition. This year’s event will be held in Union Square in Irving Plaza, New York City, a large bar and concert venue.

The organization team, like the one in LA, coordinates deals with the bar, sale of T-shirts and extends the bar reservation for two hours before and after the game. The growth of the NYCortaca has led to great feedback and will keep this event going for a long time, Smith said.

With the creation of CortaCal and NYCortaca, other honorary Cortaca events have spread across the country to Boston, Washington, D.C., and even Philadelphia.

Smith said the reach of the event across the country allows alumni to go back to their college days and enjoy one of the best college traditions: the Cortaca Jug.

“Our football games are not on national television every weekend, so we have this one game we really rally around,” he said. “For that one day, it’s like you are back in college and having fun just like you did in Ithaca.”