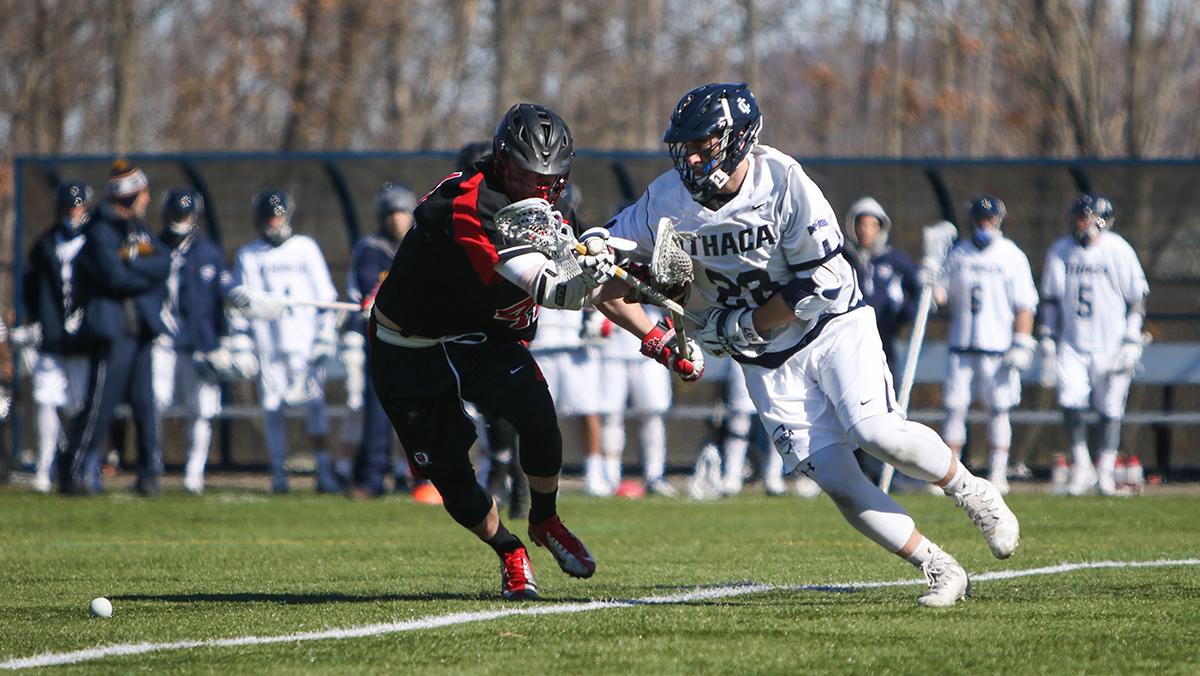 The fourth-ranked Ithaca College men’s lacrosse team began its quest to defend the home turf of Higgins Stadium with a 14–9 victory over 12th-ranked Rensselaer Polytechnic Institute.

The Bombers got off to a slow start after the Engineers scored the first two goals of the game and led 5–3 at the conclusion of the first quarter.

The two teams traded a goal each at the beginning of the second to keep RPI’s two goal cushion intact at 6–4. It did not last for long, as the Bombers began to find a rhythm and scored three consecutive goals to end the first half with a momentum-swinging 7–6 lead.

In the third, the Bombers added yet another goal to extend the lead to 8–6, only for RPI to come storming back with three consecutive goals of its own to take a 9–8 lead.

That proved to be the last time the Bombers conceded however, as they scored two more goals to end the third with a 10–9 lead.

The Bombers blew the game open in the fourth quarter as they cashed in with four consecutive goals.

Head coach Jeff Long said the resiliency of the South Hill squad showed throughout the contest.

“I thought it was a good battle,” Long said. “[RPI] came in hot and heavy but that’s what we wanted and we responded well. The best part about it was the guys didn’t hang their heads and give up. They kept fighting and fighting, and they came together in adversity rather than falling apart, which is really fun.”

Senior attacker Jack Shumway led the way with five goals in the matchup to increase his overall tally after the first two games of the season to 11 goals.

“As a player you always think you can play way better,” Shumway said. “You pick apart the faults every play you wish you scored, especially as a senior. But overall, good teams find a way to win — we ended up winning by five. We certainly feel it was closer than that and that we can play way better, but we’re really happy about that first win at home.”

Sophomore Josh Della Pucca also proved to be a key contributor, as he scored two goals and dished out three assists in the victory. Even after the win, Della Pucca said there’s still a lot of work to do and things to improve on.

“I thought we played pretty well,” Della Puca said. “I thought I played alright. I think we could’ve done certain things better, but overall I thought we played very well as a team. We definitely came alive more in the second half of the game.”
The Bombers will hit the road for their next game as they to take on SUNY Oswego at 4 p.m. on March 8 in Oswego, New York.