The story behind the Bombers’ Cortaca Jug loss 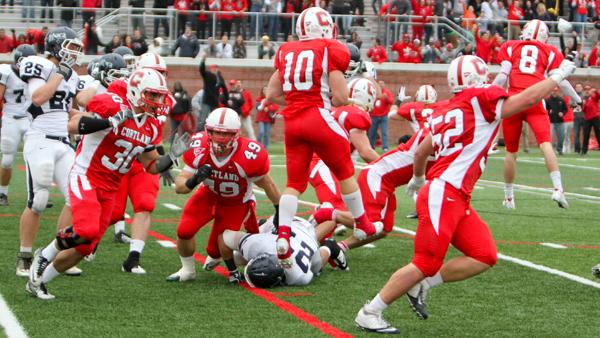 The running back took his stance at the five-yard line. He knew the play and where he needed to go.

It would be the final carry of senior Clay Ardoin’s career, an aria for a contrasting performer. His 1,000-yard performance this season is a stark contrast to his zero-yard, zero-carry season last year. He reflected on his season by saying his offseason work prepared him for his successful season this year.

“I never worked harder in my life,” Ardoin said. “To get back to where I was last season was very fulfilling.”

It would also be the final snap for senior center Nathaniel Hemingway. After severely dislocating his foot in a car accident last December, Hemingway was named offensive captain and returned to the football field in time for their opening game.

On the Wednesday before his final game, Hemingway vowed to bring the Cortaca Jug “back to Ithaca where it belongs.” His assertion served as the main story in the buildup to the 54th annual Cortaca Jug football game.

The game began tamely with both teams trading an unproductive offensive possession. Then Ardoin took a handoff from junior quarterback Phil Neumann and burst through on the left side for a 38-yard gain on his first carry, leading to a field goal from sophomore kicker Garret Nicholson.

On the second play of the second quarter, Ardoin received a handoff and ran through the left side with a burst of speed and power. He continued down the sideline untouched and into the end zone for a 50-yard touchdown to put him at 112 yards in just under 16 minutes of game time and give the Bombers a 10-0 lead. The South Hill squad would not score again.

The momentum began to slip away when Neumann was sacked to end the Bombers’ next possession, and Cortland scored two straight field goals to cut the lead to four at halftime. The Red Dragons, whose seven-game winning streak had made them the favorites for this game, would be getting the ball to start the third quarter with a chance to assume control of the game.

The Red Dragons’ offense did not score in the third quarter, but the game was changing. It did not seem as if the question would be if SUNY-Cortland, who entered the game averaging more than 40 points a game, would score but rather when.

After two short runs inside the redzone, the Red Dragons were set up for third and goal from the nine to start the fourth quarter. A Bombers’ stop would mean a likely field goal attempt from Cortland that would let Ithaca keep the lead.

Cortland senior quarterback Chris Rose got the shotgun snap and looked to his left. He saw Cortland senior wide receiver Mike Humphrey run a flag route to the back left pylon of the end zone. Rose lofted a pass toward the left sideline, where Humphrey hauled it in to give the Red Dragons a 13-10 lead.

On the next drive, it would be the Bombers’ trusted receiver who produced a big play, when senior wide receiver Joe Ingrao timed a leaping catch so that his defender was reduced to nothing but a spectator as he landed. Ingrao was the target on almost any play that needed to be a first down, including a fourth and 14 play in the fourth quarter, in which Neumann overthrew Ingrao to give the ball back to Cortland.

On the next possession, the Red Dragons had a critical third and two on the Bombers 22. Senior defensive end Skylar Schlenker beat Cortland senior right guard Randy Bloom and sacked Rose for a 4-yard loss.

While Rose and Bloom will play in the NCAA playoffs, this was the end of the road for Schlenker. After the game, Schlenker’s white jersey and bottom lip were bloodied and torn. It was symbolic of the senior’s body of blue collar work from all 36 of his games as a Bomber — a stark contrast to the white collar future he’s hoping for.

“I’m hoping to do some young artist programs and be an opera figure, but honestly I’d just like to keep playing football somehow,” Schlenker said.

The sack forced a fourth and six and Red Dragons Head Coach Dan MacNeill put out his field goal unit for what would be a 41-yard attempt. As the unit lined up, Bombers interim Head Coach Mark McDonough screamed for his defense to watch the fake.

The snap from Cortland senior Christopher Van Alstyine was picked up by Humphrey, who found space on the right side and safely rushed for nine yards and a first down at the Bomber 17 — just like McDonough warned. Cortland would be held to a field goal, and the Blue and Gold limited the potential damage.

The Bombers played the field position game and were rewarded with a Red Dragon three and out with just over two minutes to play. Cortland junior kicker Mike DeBole’s punt was fielded by sophomore cornerback Sam Carney, who eluded two tacklers and ran down the Bomber sideline until he was finally brought down at the Red Dragons’ 20.

The Bombers had scored a touchdown in only 45 percent of red zone opportunities this season. Now, with the ball at Cortland’s 20-yard line, they were looking to defy the odds. A 12-yard Ardoin rush on the first play put the Bombers at the eight-yard line, and the anticipation grew. After Ingrao gained six on second and goal, the Bombers had third and goal at the three. Ardoin had another rush to the left and cut back to the right before being brought down two feet short of the goal line. It was fourth and goal — one play to determine the postseason fate of two schools and the pride of central New York.

The crowd waited after a Red Dragon timeout and rose. The Bombers lined up with senior fullback Michael Moon to Neumann’s left and Ardoin behind Neumann at the five-yard line. As the Bombers ran the power play to the left, Red Dragon senior defensive back Phil Bossman surged forward. Moon, Ardoin’s lead blocker, failed to reach Bossman in time, and the defender forced Ardoin to bounce to the outside. Bossman grabbed Ardoin’s ankle and held on long enough for his teammates to bring the Bombers running back down for good.

Ardoin remained down on all fours, while the Red Dragons jumped for joy at the goal line stand. His teammates helped him up, while the scoreboard read Cortland 16, Ithaca 10. He would say after the game that this was one of the lowest points of his career, but he acknowledged the opportunity he had at glory.

“The life of a football player is great,” Ardoin said. “You have your own life and then your football life. They overlap with the character you bring and the relentless dedication you have, and you can always carry it over to life in general.”

For the Bombers, the 2012 season is over. A season that ended with the most haunting question in all of sports: “What if?” What if the Bombers had not been fooled on the fake? What if Moon had stopped Bossman from getting through?

McDonough tried to answer the “What if?” question after the game, when he said the
team is almost there.

”We’re one or two plays away,” McDonough said. “I hope that they internalize that and use that as motivation moving ahead for next season.”

When asked to sum up the season, McDonough said one word.