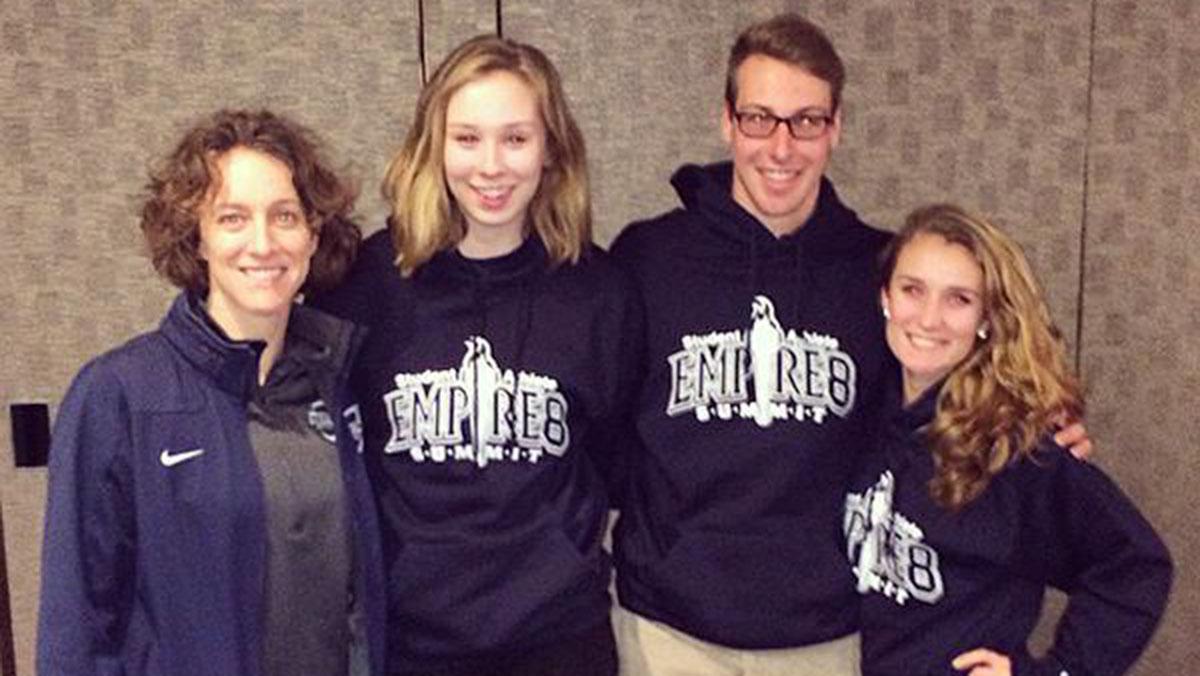 Benji Parkes, a junior pitcher on the baseball team, readies himself for the beginning of the game. The challenge before him is difficult. He knows he needs absolute perfection to achieve his objective. He pitches as straight as he can and after several long seconds in which the crowd surrounding him holds its breath, Parkes reaches his goal, and the group breaks out in cheers.

But these are not normal spectators, and they are certainly not the usual fans that cheer for Parkes as he pitches for the Blue and Gold. In fact, Parkes isn’t even playing baseball, and the supporters that surround him are normally his competitors.

He has just rolled a quarter across a table into the small gap between two prongs of a fork, causing the quarter to stand on its side and eliciting cheers from the small group of student-athletes from the rest of the schools in the Empire 8 conference.

Parkes, along with sophomores Holly Niemiec and Siobhan Sorensen of the women’s soccer and volleyball teams, respectively, traveled to Fairport, New York, to attend the 2015 Empire 8 Summit. Each year, the conference brings selected athletes from every school in the Empire 8 together for a weekend to engage in leadership activities and discussions. In addition, Parkes, Niemiec and Sorensen bonded with student-athletes from other schools that they wouldn’t normally interact with off the playing field.

The trio, along with Michelle Manning, assistant director of Athletics and Seniors Women’s Administration, arrived in Fairport on Jan. 23 and stayed for the two-day conference, which featured keynote speaker Gail Hand. Over the course of the weekend, the certified laughter yoga leader spoke with the 34 student-athletes from Empire 8 schools about leadership in their sports, social media use and unity within athletic departments.

Parkes said Hand was particularly helpful in raising his awareness about his online presence.

“[She] talked a lot about what you want your future employers to see,” he said. “You want them to say ‘Oh, look, he has been out with the Ithaca College baseball team volunteering.’”

After Hand spoke on Friday night, the student-athletes competed against each other in “Minute to Win it” contests, in which they had one minute to complete a task while working with students from other schools.

Each athlete was given a piece of candy, and teams were formed based on which other student-athletes had matching candy. Sorensen said collaborating with those who would normally be her rivals was strange at first, but soon became as easy as interacting with other Bomber athletes.

“The Empire 8 is a very competitive league, and we had our hesitancies at first,” she said. “I think … in the future we are going to be better sportsmen on the field because now we have a name to the face of our competitors.”

Parkes said he was surprised by the amount of support he received during “Minute to Win it.”

“You’d never expect an Ithaca College student to cheer on a St. John Fisher player, so it was nice to break out from all the stuff you have against other schools and just be united for one weekend,” he said.

As another bonding experience, the student-athletes roomed with an athlete within their sport but from another school. Parkes stayed with a freshman baseball player from Utica College, which he said was a good experience. As a junior, Parkes was able to give the younger player advice.

The next day, the student-athletes split off into three groups for conferences that dealt with alcohol education, team leadership and inclusivity within athletics. They then met with the other representatives from their schools to discuss what they wanted to bring back to their own campuses.

Each athlete who attended the conference is part of their respective school’s student-athlete advisory council, which meets regularly to discuss specific issues surrounding athletics. Niemiec said the trio wants to bring a greater social media presence to the college’s athletics department while also increasing the amount of volunteer work each team does.

“It was a really cool experience getting to know other programs, and we brought our own ideas and proposals for what we want to do as SAAC programs in the future,” she said. “We brought a lot of great ideas back about what steps we want to take in the future to bring our athletic community together.”

While the conference gave the student-athletes ideas for improving various aspects of the college’s athletics department, Sorensen said it was one of the best experiences of her college career.

“Everyone who has gone really enjoyed it, and some say it has been the best part of their college career,” she said. “For me, it’s up there.”