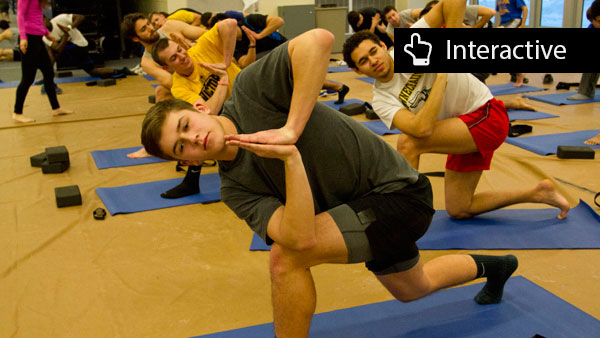 Amanda den Hartog/The Ithacan
Freshman sprinter Sam Piraneo holds a pose to his left side while members of the men’s track and field team join in during a weekly yoga session at practice Feb. 10 in Glazer Arena.
By Nick Marcatelli — Staff Writer
Published: February 12, 2014

Ithaca College's track team effectively relieves stress by doing yoga every Monday. This also prevents injury and builds strong muscle for competitions. For each of these four poses practiced by the team, various muscles in the body are being worked and stretched. Three specific muscles are highlighted in each one; discover which pose is good for what muscles by hovering your mouse over the body. While coaches call out times to athletes on the men’s and women’s track and field teams every Monday afternoon in the noisy Glazer Arena at the Athletics and Events Center, some sprinters, jumpers and throwers on the men’s team lie on a carpet and just breathe. At first glance, the group posture is reminiscent of a religious meditation, but this routine is just part of training.

For the team this season, practice includes a yoga session once a week. Melissa Weiner, a volunteer assistant coach for the track and field teams, is the instructor, and she walks around the athletes and explains to them the position of the exercise. She said yoga is very applicable to several sports because it makes the body stronger and more flexible.

“I coached track in Harlem, N.Y., and I taught yoga to high school kids and adults,” Weiner said. “I know that when athletes do yoga and combine track, it prevents injury and builds a lot of strengths and flexibility. Yoga also helps to meditate more. In many sports, you really need to meditate to be focused.”

Meditation is particularly important for sprinters, who need to have a clear mind before every race, which often lasts only a few seconds. Junior Kyle MacKinnon said yoga helps him remain focused when it’s time to compete.

“Yoga helps you sort of get into the state of mind where you are ready to conquer what you have to do that day, whether it is a mile race or a 10-second race,” MacKinnon said.

Being focused without tension on the next competition is important to succeed in the sport, so yoga is beneficial to all athletes, Weiner said.

“The most important thing that yoga teaches you is to be present, just to live moment by moment, be in the present, which means being focused on your goals,” Weiner said.

Sophomore Zane Scott said he thinks this activity helps his muscles to be more relaxed.

“I feel [yoga] is really beneficial,” he said. “With coach Weiner, we work a lot on flexibility because, being sprinters, we have pretty tight muscles most of the time for our lifting and powerful movements.”

A typical yoga session for the track and field team lasts one hour and begins with breathing and meditation, Weiner said.

“We always start with breathing,” Weiner said. “We open with that because it is always good to focus on the breath, the length of inhalation and exhalation. Then we talk about the theme of the session and [after] we meditate. The session continues with some sun salute, then we work on poses that are specific to where the athletes are feeling tension.”

The team has valued the one-hour session with Weiner. MacKinnon said he sees many benefits from having the session early in the week.

“We may have pretty hard workouts on Mondays,” MacKinnon said. “I find [yoga] really helps us relax and control our breathing.”

Though Scott was already familiar with yoga, having practiced it in the summer, most of the Bomber athletes never tried it before they met coach Weiner. Scott said he believes that’s why yoga was a challenge for the team at the beginning of the season.

“Some of them were like, ‘I didn’t even know yoga was this hard, I thought it was just being seated,’” Zane said. “They had a false impression of yoga. It could be very rigorous, especially when you are working on the strength aspects. I remember last semester they giggled a lot, but now they are realizing the benefits, because they are not getting injured as much.”

Weiner is new to South Hill as a coach and community member. She attended Emory University in Atlanta, where she was an athlete on the track and field team.

“When my husband and I moved to Ithaca last summer, I contacted [women’s head coach Jennifer Potter] and said, ‘I want to get involved; I’d like to coach or do yoga, I have both certifications, I think I can offer a lot to your team,’” Weiner said.

So far, Weiner has brought to both the men’s and women’s track and field team a weekly yoga session, even in the off-season. Weiner has also begun this training with the Bombers’ diving team, because she thinks more athletes are willing to do yoga, she said.

“Yoga is trending,” she said. “It offers a sense of community, flexibility, strength and balance. I think others teams on campus should consider doing it.”