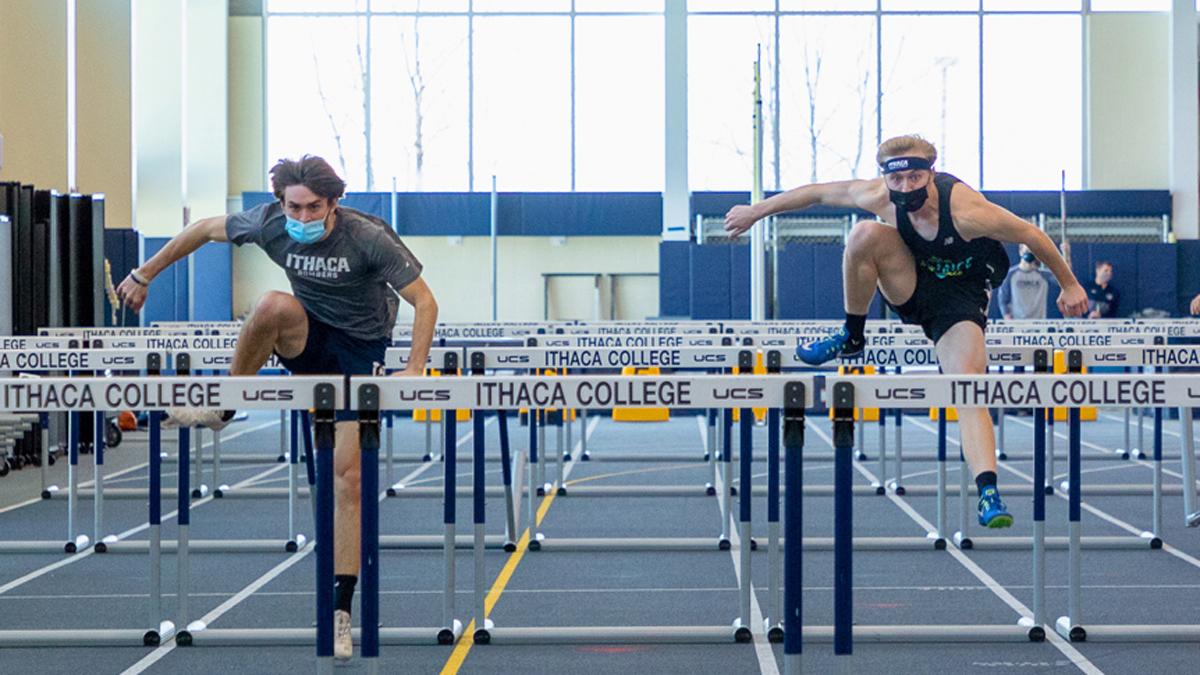 As the first team to return to competition at Ithaca College, the men’s indoor track and field team held an intrasquad meet on Feb. 13 followed by the women’s team on Feb. 14 at Glazer Arena in the Athletics and Event Center. This meet included only members of the team and will not count toward any league or NCAA competition record.

Junior Matthew Tai placed first in the 55-meter dash with a time of 6.70 seconds and was closely followed by freshmen Sam Panzer and Aaron Davis, who tied at 6.80. Junior Steven Floros finished in third at 6.90 seconds. Sophomore Tia Jones won the 55-meter dash for the women’s team in just 7.30 seconds, and was followed by freshman Kat Gomez at 7.40 and sophomore Sara Brown at 7.50.

Gomez took first this time around in the 300-meter dash with a time of 41.90, while junior Katelyn Hutchison placed second in 42.00 seconds and senior Sarah Lachenmayr in third at 45.10. For the men’s squad, sophomore Andy Frank pulled away with first place in the 300-meter dash in just 35.60 seconds. Sophomore Nate Oczkowski then placed second followed by senior Zach Woodruff in third.

Junior Zach Wachs finished first in the 600-meter run in 1:24.80 minutes, with freshmen Conor Ryan and Jon Sadanaga coming in second and third. Junior Lauren Lobdell ran away with first in the event for the women’s team with a time of 1:38.30 minutes. Junior Paloma De Monte finished close behind in 1:38.50, and first-year graduate student Maggie Nickerson placed third in 1:38.90 minutes. 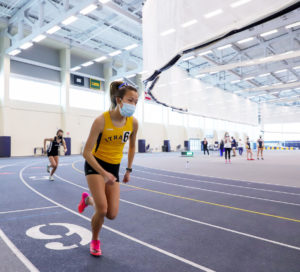 Junior Dan Monchek led the men’s team in the 55-meter hurdles in a time of 7.80 seconds, and Oczkowski followed just 0.1 seconds behind. Freshman Matt Morgan finished in third. As the only three competitors, junior Logan Bruce took the win for the women’s team in just eight seconds, followed by sophomore Grace Clark and then senior Sydney Strelec.

Sophomore Ava Fowler and Johnston teamed up with Garrity and Hannan to win the 4×200-meter relay for the women’s team in 1:53 minutes. Frank, Tai, Floros and Panzer came out on top for the men with a time of 1:35.90.

After taking third in the 55-meter dash, Brown came out on top in the long jump, leaping over the 5.05-meter mark. Sophomores Moriah Byrd and Ayenaliz Velasquez finished second and third within just 0.01 meters of one another. Freshman Spencer Whitmore took first place for the men’s team, jumping 6.43 meters, with Monchek and Davis tying for second at 6.31 meters.

Bruce won the high jump, leaping over the 1.65 meter mark, and Bernard and Byrd came in behind her. Clark took her first win of the day in the triple jump, hitting 10.33 meters, followed by senior Molly Sear and freshman Ashanti Stanley.

Tobia was the only competitor in the final event of the meets for the men’s team in the weight throw, throwing 17.29 meters. Bernard took home her second win of the day after throwing 15.23 meters. Healy followed in second again, and senior Liana Shames threw for third place.

The team’s next intrasquad meet will be held Feb. 27 for the men’s squad and Feb. 28 for the women at Glazner Arena in the Athletics and Events Center.