Track teams look to be tested during NYC trip 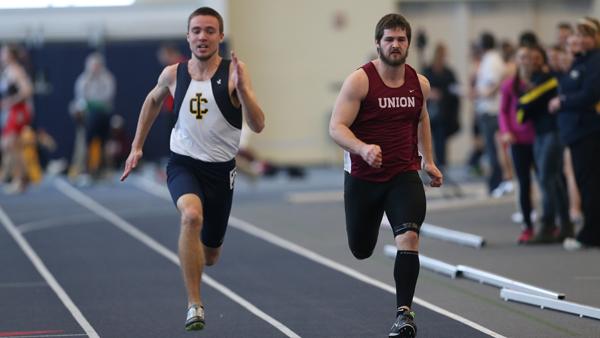 There are always many activities going on in the city that never sleeps, but this weekend many eyes in New York City will shift to the Armory Track, where track stars from around the country look to shine at the New York University Fastrack Team Challenge.

The top athletes on the Ithaca College men’s and women’s indoor track teams are leaving Ithaca for the first time this season and are headed to the Big Apple to compete at the Armory this weekend. With the New York State Collegiate Track Conference and Eastern Collegiate Athletic Conference tournaments around the corner, the athletes are looking to use this meet to see where they stand as individuals and as a team.

The team is going to be facing some Division I competition at the Armory this weekend. Freshman field athlete JayVaughn Gibbs said the Bombers can use that to their advantage, because the tougher competition will help motivate them to do their best and continue to improve.

“I think it will be a good experience to go against athletes that are better, because it will help us compete to the best of our ability to be able to compare to them,” Gibbs said.

There is a lot of excitement coming from both teams about this meet. Women’s Head Coach Jennifer Potter said it will be good to get out of Ithaca and prepare for the upcoming weeks on a track they need to know well and gain experience by facing some good competition.

“It’s an exciting trip for us,” Potter said. “The Armory is one of the fastest tracks in the northeast. The competition is going to be really high there and especially for a lot of the freshmen that already qualified for ECACs, they will be able to get to see where that competition will be.”

Potter said it is also a good thing for the team to be traveling so they can bond and gain some more experience.

The men’s Head Coach Jim Nichols said this meet comes in the schedule at a perfect time for the team. He plans to take mostly sprinters, throwers and jumpers to the meet to prepare them for the upcoming postseason meets, one of which is also held at the Armory.

“The purpose of going down there is to prepare us for the state meet and the ECAC’s the week after that, which is basically our postseason,” Nichols said.

Nichols said none of the distance runners will be traveling to New York City with the team, and that they can benefit more from staying at home and resting up for later tournaments.

“They are better served by being up here and training and then maybe doing a race at Cornell,” Nichols said. “A lot of them won’t be racing at all this next weekend, because they will be resting up, because they will probably be doubling up at the state championship.”

With the postseason just around the corner, the Bombers hope to be peaking at their events. Gibbs said facing better competition now will help prepare them for the postseason and help gauge where they currently stand as a team.

“We will know what to expect,” Gibbs said. “We won’t be surprised by the competition, and it will be a good experience for us overall to see where we are at as a team.”