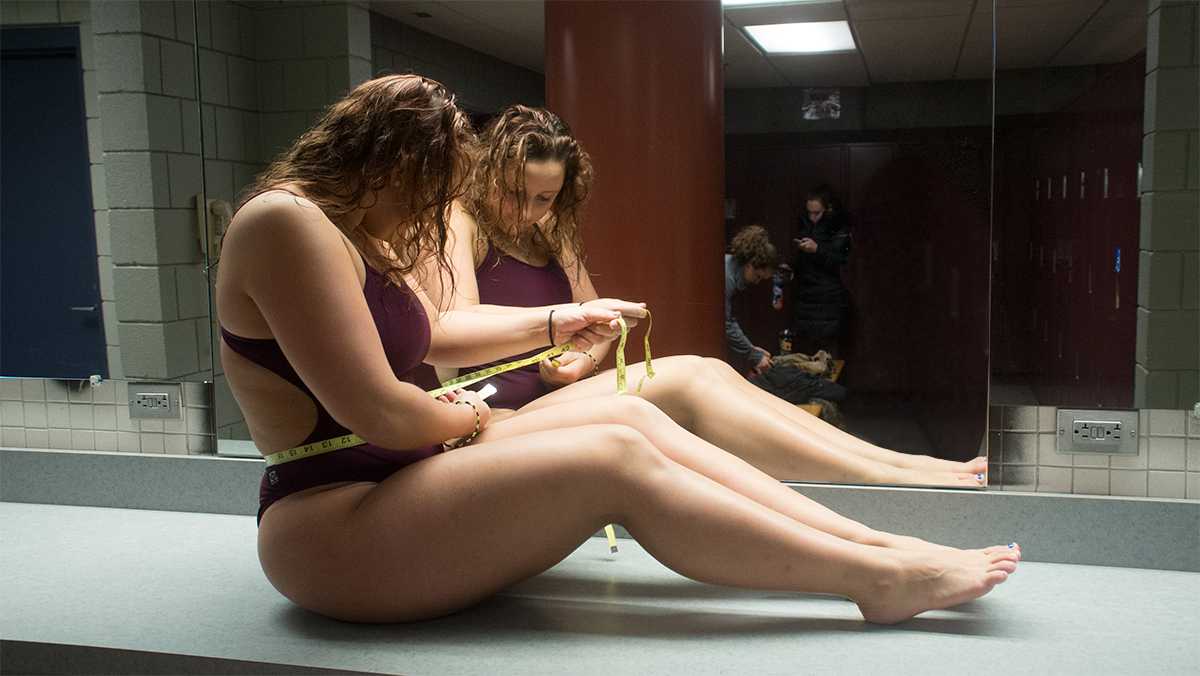 As the glare of the morning sun shines through the windows of the Athletics and Events Center’s Aquatics Pavilion, sophomore Corie Levine is in the midst of a grueling, two-hour swim practice, the first of two for the day. Her 5-foot-one, muscle-packed body glides through the water with ease and determination, each stroke bringing her closer to the wall and her goals.

After practice, she heads over to one of the dining halls on campus and shares a meal with her teammates before going to her dorm room for a quick nap. Three hours later, she’ll head back over to the pool and begin the whole process over again.

After a two-year battle with anxiety, depression and an eating disorder, Levine said her life is finally back to normal. Two years ago, attending swim practice for only five minutes was impossible, and being around food triggered hours of throwing up. Family problems, stress and body issues are just some of the things Levine said could set off her anxiety.

In September 2013, Levine was in the beginning of her senior year of high school, a time that is supposed to be filled with fun times with best friends and spent enjoying the last year before splitting off for college.

Instead, Levine’s year veered down an entirely different path when she stopped breathing one night while in a synagogue and was rushed to the emergency room, where it was determined that she had suffered an anxiety attack. Before leaving for synagogue, she said she had gotten into a huge fight with her older sister, something that Levine said was a common occurrence, that left her shaken up.

“My sister is very judgmental sometimes. I remember I was wearing this dress, and my sister came into my room and flipped out, telling me that my dress wasn’t conservative and that I looked like a slut,” Levine said. “At times she can seem jealous because I’m smaller and more athletic than her, so whatever I do or wear used to make her angry.”

Three weeks later, Levine was hanging out with her friends when the worst anxiety attack occurred, setting off eight months of doctor appointments, therapy sessions and psychiatric evaluations.

The night of this attack began with Levine’s going out to dinner with her friends. However, just a few hours later, she was on the floor in her friend’s bathroom, with the weight of her friend’s father holding her down to control her shaking. When she wasn’t on the floor shaking uncontrollably, she said, she was alternating between throwing up and crying hysterically.

“[My friends] had never seen anything like it,” Levine said. “It was horrifying, I never want to go through that again.”

Before her first anxiety attack in synagogue, Levine said she would have described herself as a normal, happy teenager.

“I never used to have anxiety,” Levine said. “I was always a happy, peppy and jumpy person. People would know right away when I wasn’t OK.”

Levine was an active child and participated in multiple sports growing up. Her mother put her into the pool when she was 3 years old and discovered that her daughter was a natural. In addition to swimming, she also took karate classes.

Despite her love for both of these sports, she was unable to practice for three months after her initial anxiety attacks. Levine had to constantly remind herself that this was just a feeling, it would pass and that she needed to move on with her life. However, this was easier said than done. Levine also had insecurities about her body image and developed an eating disorder.

During this time, Levine’s mother couldn’t get her to eat anything. Levine said she would force herself to throw up if she felt like she had eaten too much or if she didn’t feel good about the way she looked.

“My mother would ask me what looked appetizing, and I would say, ‘Nothing,’” Levine said. “I knew I was just going to make myself throw up later, so I thought, ‘What was the point?’”

Levine attended therapy sessions and was on medication until June 2014, eight months after the initial attack. However, in December 2013 things began improving for her. One night while hanging out with her older brother, they stumbled into an indoor arcade.

While playing a game, she won a pack of green, glow-in-the-dark stars and decided to make a game out of it: Every time she ate something and kept it down, she put a star up in her room. Levine said this was very difficult for her, but she was able to put up seven stars over the course of three months.

“Keeping the food down was so hard — the most difficult thing I’ve had to do in my life,” Levine said. “But I got to put up those stars that are still in my room and are a good reminder of how far I have come.”

After that night at the arcade with her brother, Levine said she forced herself to return to karate and swimming to regain a sense of normalcy.

“My sensei told me that he did not care. I was coming, and I was training with him,” Levine said. “He was able to pinpoint exactly what I needed and acted as a coach to help me get through this time.”

Getting back into the pool was a little bit more difficult, but she took it day by day. The first day, she said she drove to the pool. Then the next day, she got into the water for 10 minutes, slowly increasing the amount of time until she was able to return to a full practice schedule.

“I told myself if I just drove to practice, that’s a start. I told myself that if I can stay for 30 minutes, I can make it to 45. But if I’ve already done 45, I should be able to do an hour,” Levine said. “It became a game I would play with myself.”

For some students, coming to college can increase their anxiety. For Levine,however, her home is one of her trigger points, filled with bad memories and reminders of the difficulties she faced, so she said coming to college was easier than she thought it would be, especially because her roommate, sophomore Alyssa Sbarro, was there to help her with the transition and keep her on track.

“My roommate here was a great helper,” Levine said. “She used to follow me into the bathroom and yell and scream at me to stop if I was throwing up.”

Sbarro has also had a history of anxiety and is currently on medication to control it, so she said knows what to watch out for and how to help Levine.

“We help each other with anxiety because I know what it’s like,” Sbarro said. “The main thing that helped her was the fact that she could be herself with me.”

Now, 2 1/2 years after her first anxiety attack, Levine is almost completely over the disorder that plagued her senior year of high school. Levine is now not only a member of the swim team, but also of Pulse, one of the college’s hip-hop teams.

Her teammate sophomore Makenzie Karr admires Levine and her dedication to swimming.

“Corie works extremely hard during practice,” Karr said. “She is one of the most caring people I know, and it’s obvious that she cares tremendously for both swimming and our team.”

Levine said she knows this is something she will struggle with for the rest of her life but feels that she has the tools now to help her deal with it.

“I learned to do what makes you happy,” Levine said. “I always thought that if you’re skinnier, you’re faster, and more people will like you, but that’s not necessarily the case. You need to do what is best for the well-being of your body because no one else matters.”