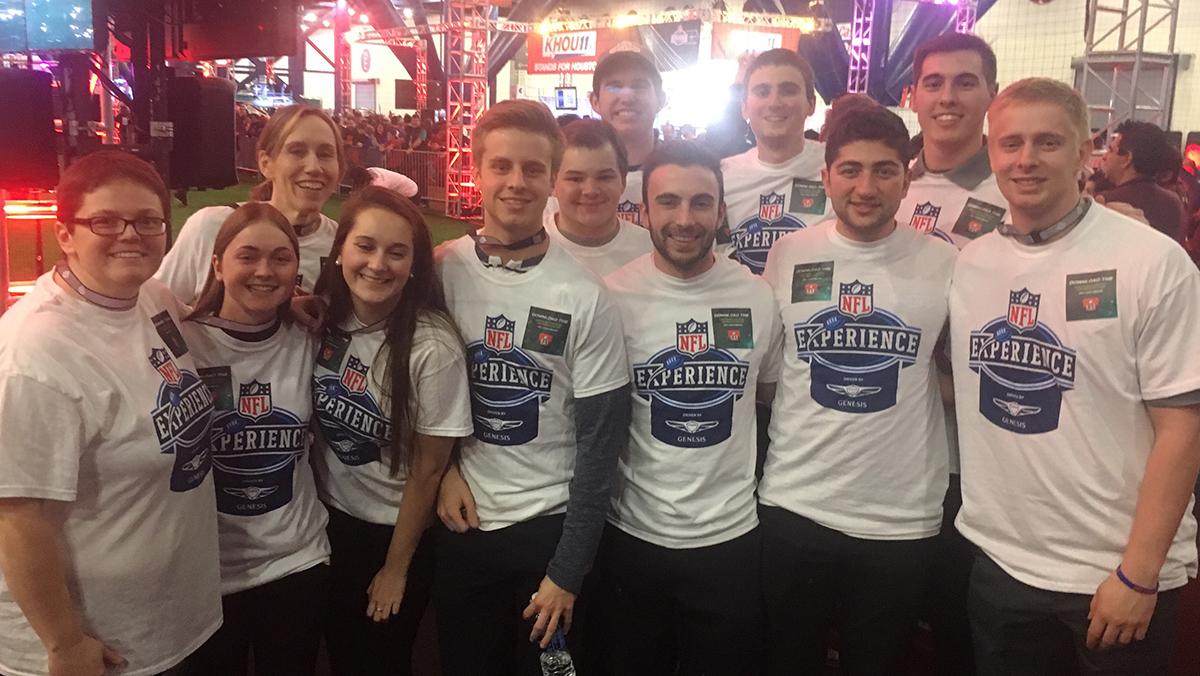 COURTESY OF BRANDON BUKSBAUM
Twelve sport managment students and two professors had the opportunity to volunteer at the 2017 Super Bowl in Houston. They volunteered at the Super Bowl Live event, a fan festival outside of the stadium, where they ran different games.
By Caitie Ihrig — Assistant Sports Editor
Published: February 7, 2017

While most people were watching the Super Bowl on their couches, students in the Department of Sport Management were busy working. These students had the opportunity to volunteer at events at the convention center leading up to the Super Bowl in Houston.

Students in the sport management department had the opportunity to apply through Ithaca College, and 12 were selected. They volunteered at Super Bowl LIVE, a fan festival outside of the stadium in downtown Houston, where they ran different games for fans to play.

Assistant Sports Editor Caitie Ihrig spoke with senior Brandon Buksbaum about his experience working the Super Bowl LIVE event, attending Super Bowl 2017 and what he learned while there.

Caitie Ihrig: Why were students from Ithaca College able to work the Super Bowl?

Brandon Buksbaum: This whole application was done through the sport management program. Our professor, Annemarie Farrell, was able to get a number of volunteers to be able to go to the Super Bowl. She formed an application process, and a lot of people signed up. She selected a handful of students to go, and I was one that applied, was accepted, and I went. We left Wednesday and we came back Monday.

CI: What did you do at the Super Bowl?

BB: We didn’t work at the actual Super Bowl. We worked at events that were around it. One of the things we did was we worked at Super Bowl LIVE, which was an area right outside the stadium. A lot of fans and attendees would walk around and experience parts of Houston, parts of just football fun and things like that. We also worked at Downtown Experience, which was in the convention center, and we helped out with games. There was a field goal kickoff, and we helped to assist that. It was a lot of little stuff, but we had a lot of fun volunteering.

CI: What are your overall thoughts on your experience?

BB: I thought it was a great. Just being at a Super Bowl city and being in Houston for the first time, it was a really great experience, especially working those shifts. Those shifts were six hours a day. It was definitely worth it. We got to talk to a lot of people. We got to know the city well and be around a lot of people. We were able to see J.J. Watt; we saw Lady Gaga walking around. We saw a lot of big football players, too. It was really great just to be in their presence.

CI: What did you do when you weren’t working your shift?

BB: We were eating. We were going to a lot of really good restaurants. We went to a Houston Rockets game. We also got a tour of the Houston Rockets, thanks to one of the IC alumni who works with the Rockets. We were able to talk with someone who works with the NFL as well. We had our night life. We went to see music performances. It was a lot of fun.

CI: What did you learn from this experience?

BB: I learned to take risks because this was something that I knew I would skip a lot of class and I would be missing a lot, but I have been in classes for 16 years of my life. I might as well do something new, something different, and this was definitely one of those things where I went out of my comfort zone. I learned a lot. It was a great resume builder. I made great connections, and I got to know a lot of the sport management students as well.

CI: How did you go out of your comfort zone?

BB: Just being able to socialize with a lot of different people. Just not being in class here because I’m used to being here all the time. Now I’m in Houston for a couple of days working the Super Bowl. I didn’t think I would be here if it wasn’t for my professor telling me, “You have this choice to go.” I’m very thankful for that. I’m very thankful to be part of the sport management program. It was just everything I really wanted this semester.

CI: What was the coolest thing you did?
BB: It was just working at the convention center. In there, there were a lot of cool things going on. There were a lot of cool people walking around, and the crowd kept building up day by day as the Super Bowl got near. On Super Bowl night, we went to this bar called Thrillist, which is the oldest bar in Houston, and it was really funny because it was a Falcons fan headquarters, and we had four Patriots fans. It was a very interesting night to say the least.

‘Asman and Budick Show’ to broadcast live from Super Bowl