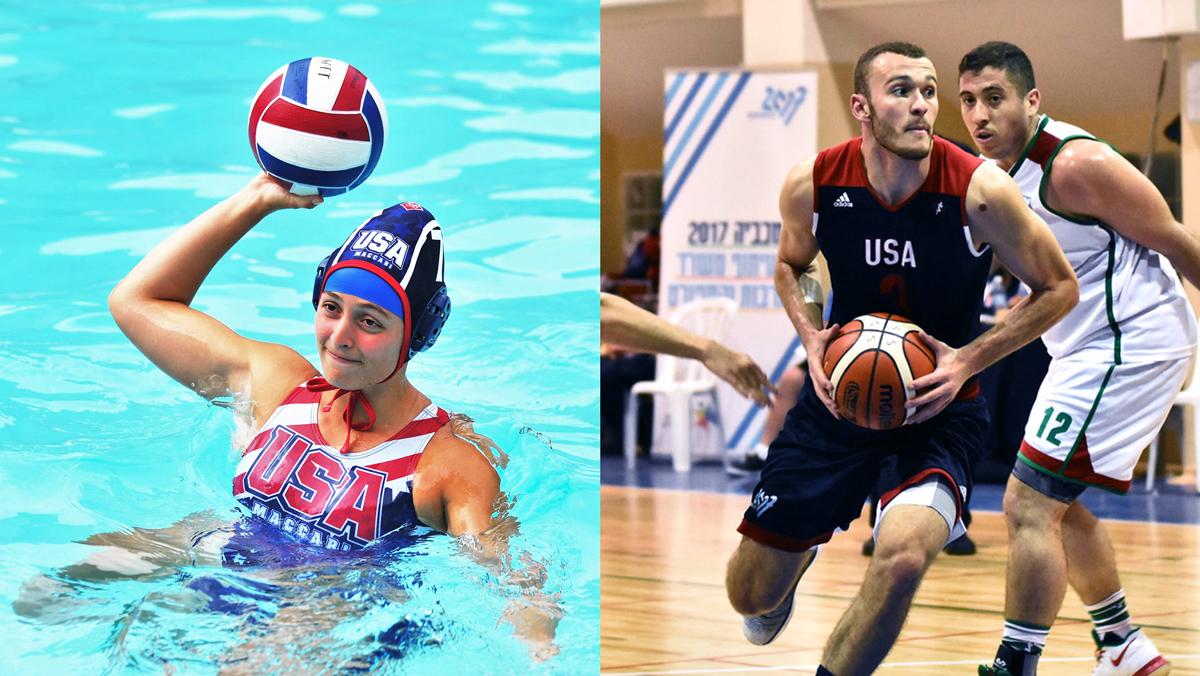 While senior basketball player Marc Chasin and sophomore swimmer Josie Berman have represented Ithaca College athletics during their careers on South Hill, the pair decided to embark on a greater challenge this summer. Swapping out the Bombers’ blue and gold, Chasin and Berman suited up in red, white and blue to represent their Jewish heritage and compete in the 2017 Maccabiah Games in Israel.

The Maccabiah Games, known to many as “the Jewish Olympics,” takes place every four years. This year was the 20th Games since beginning in 1932. According to its website, the Maccabi World Union is composed of over 60 countries and 400,000 members, making it the largest and longest–standing Jewish sports organization.

In Fall 2016, Chasin and assistant basketball coach Sean Burton traveled to New York City for tryouts. Chasin decided to try out for the team because, he said, he felt that if he didn’t go now, he probably never would.

When he received the news in April that he made the team, he continued his off-season workouts until the games began.

“It wasn’t guaranteed, but I felt like I was in a good position to make the team,” he said. “Just the opportunity to represent my country, [and] at the same time represent my faith, was a big deal to me.”

He said that being in Israel, the holiest land for Jewish people, enabled him to realize how special the country was.

“It was an awesome feeling, being over there,” Chasin said. “Getting to experience all the different things that comprise Judaism was really cool.”

During the beginning of the trip, Chasin said, he practiced twice a day, once at 7 a.m. and then again at 4 p.m. After the first four days in Israel, the U.S.A. team had one practice in the morning and then was able to explore the country.

Head coach Doug Gottlieb said Chasin played better than he had expected him to against the better competition the team faced in Israel.

“I would describe him as a lean, rangy, slashing scorer who plays with great energy,” Gottlieb said.

One of the biggest adjustments Chasin had to get used to was the traveling rule in basketball. Overseas, the ball would have to be dribbled before taking any kind of step, while in the U.S., a slight step before the ball is dribbled is permitted. Despite having to make minor adjustments, Gottlieb said that Chasin stepped up his performance against the better teams. Chasin was used as a power forward and used his quickness as an advantage against bigger players.

“Marc had a great attitude, and [even] though his minutes and positions, as well as the officiating, was an adjustment, he never let it affect his personality,” Gottlieb said.

Chasin said the final game against France was the toughest of them all. Despite the tough matchup, the U.S. defeated France 75–67, clinching the gold medal.

“It was extremely exciting, and I think we were all so relieved,” Chasin said. “Most people would be like, ‘I got a silver medal. That is such an accomplishment.’ But with us, it was like if we don’t win gold, it’s failure.”

Chasin said a good indication of what the final outcome would be was the chemistry the men developed so quickly. He said the level of talent each member of the team had boosted his expectation of walking away with nothing less than what they came for.

“The coolest part was stepping out with USA on my chest,” Chasin said.

Due to the lack of participation for women’s water polo compared to swimming, Berman decided to join the water polo team. No official tryouts were held because of the low participation.

“Even though I wasn’t competing in my sport, I was still competing and representing America in this amazing competition,” Berman said.

To get ready for the games, Berman joined the Cornell University water polo club in January, and upon returning home to Wayzata, Minnesota, she joined the Minnesota Masters Water Polo club.

Her primary role on the Maccabiah team was to be the team’s swimmer. In water polo, there must be someone to sprint and get the ball in the beginning of the game, and it was her job to outswim the athletes on the opposing team.

For Berman, this experience in Israel was different from the past three times she visited the country. This was the first time she was taking part in competition while in the country rather than vacationing. During this trip, she visited the Dead Sea, the beaches of Tel Aviv, and the Western Wall in the Old City of Jerusalem.

“We did touristy things, but for the majority of the time, we lived in a town where people were locals,” Berman said. “It was interesting to see how different a place I had been three times before was in my eyes by being there for a longer period of time.”

Larry Zubrin, the women’s water polo head coach, said he was impressed with Berman and her ability to compete at an international tournament.

“I think she did a remarkable job,” Zubrin said. “Considering the circumstances, it was quite surprising how well she performed for us.”

Despite the challenges Berman faced, such as understanding and interpreting why foul calls were made, Zubrin said her intelligence, constant desire to improve and strong work ethic helped her overcome obstacles.

In the final game for Berman and the U.S. team, they faced Israel and were defeated 8–5. Berman competed in five games while at the tournament, facing the other two competitors, Israel and Hungary, twice in the preliminaries.

Although Berman did not clinch the gold medal with her team, she said she was happy with the end results.