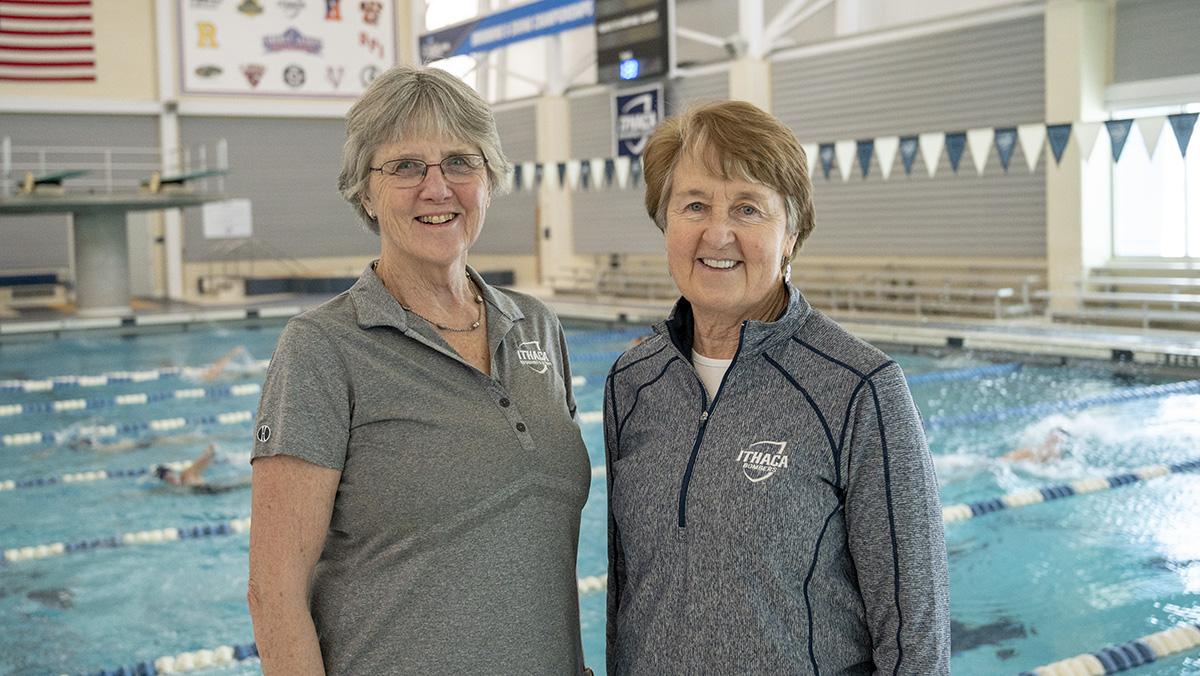 Lauren Lubenow/The Ithacan
From left, Paula Miller and Susan Bassett were named to the College Swimming and Diving Association of America's top 100 coaches in the past 100 years
By Aidan Charde — Assistant Sports Editor
Published: February 1, 2022

Susan Bassett ’79, the current director of Intercollegiate Athletics at the college, and Paula Miller, recently–retired women’s swimming and diving coach, were named on the list, which was a celebration of the CSCAA’s centennial. Miller, who retired from the position following the 2019–20 season, spent 36 years as the head coach at the college. She coached 78 student-athletes to All-American honors and has nine former student-athletes in the Ithaca College Athletic Hall of Fame. But Miller said she had not originally planned to make a career out of coaching.

“[Swimming] was always something that was a passion, but I never thought that I could make a lifetime of it,” Miller said. “I always thought I’d do it for 10 years or so, but I was hooked. It didn’t ever feel like working.”

The list was formed by taking nominations from fellow swimming and diving coaches, voting on those nominated, and being looked over and approved by a committee within the CSCAA. The list states that over 500 coaches were nominated, and that the nominations were then narrowed down to 263 finalists. The finalists were then narrowed down to 100, to form the list.

Although the list included 100 names, 15 of those names were women, and only three of the women were from Division III, including Miller and Bassett.

“It’s really hard to grasp because many on that list were my heroes, my mentors,” Miller said. “To think that over 100 years and how many Division III institutions there are [that I was included] … it was a wonderful surprise.”

Bassett said that she feels honored to be placed on such an exclusive list and that she was blown away to hear she would be included.

“I’m enormously grateful to be included among such an incredible list of coaches,” Bassett said. “I hold the other 99 coaches in such high esteem and high regard that I’m just kind of beyond words.”

For Bassett, making the list is an honor, but she said it is even more special for her to be included next to Miller. Bassett was formerly the head coach of William Smith College for seven years as well as Union College, where she coached for eight years. At both colleges, Bassett and Miller coached against each other several times.

“[Miller] has been a mentor, a competitor, a colleague and a friend,” Bassett said. “She encouraged me to get involved in the NCAA Swimming and Diving Committee … and she nominated me for the Ithaca College Athletic Hall of Fame.”

Kevin Markwardt, the current men’s and women’s swimming and diving head coach, said he considers both women to be deserving of a spot on the list. Markwardt has been the head coach of the men’s team for 34 years and has taken up coaching the women’s team since Miller’s retirement.

Markwardt said he respects Bassett as a coach, having coached against her when she was at William Smith and Union.

“I had the pleasure of coaching against [Bassett] back in the 80s,” Markwardt said. “Although I’m not sure if that’s even the right term because she had some very strong programs back then. … She was someone who, when she went up against you, you better be ready because you knew she was going to bring it 100%.”

As for Miller, Markwardt said her biggest success is her consistency over her time with Ithaca College. In the 36 seasons under Miller, the women’s team won 30 conference championships and had 11 undefeated seasons.

“[Miller] had the only program that was consistently at the top the whole time,” Markwardt said. “Programs tend to rise and do well for a while, but inevitably, you have problems, things change, people make different decisions … [Miller] had a very strong winning ethic.”

Junior swimmer Erin Kiley was only a part of Miller’s team for one season. However, Kiley said Miller still made an impact on her in their short time together.

“She cares so genuinely about all of her athletes and makes everyone feel valued as [part of the team],” Kiley said. “She had confidence in us … she helped me improve a lot as a swimmer.”

Kiley said Miller still makes an effort to go to meets. Although the college is currently restricting outside spectators, Miller said she wants to make sure the current swimmers that she formerly coached get acknowledged.

To create a list of just 100 names in a sport with so much history is difficult, Markwardt said, but he said he believes the voters made the right choice with Miller and Bassett.

“Both of them were very successful at a time when there weren’t a lot of women coaches,” Markwardt said. “They are very deserving of that honor. They were pioneers … and they were really role models.”