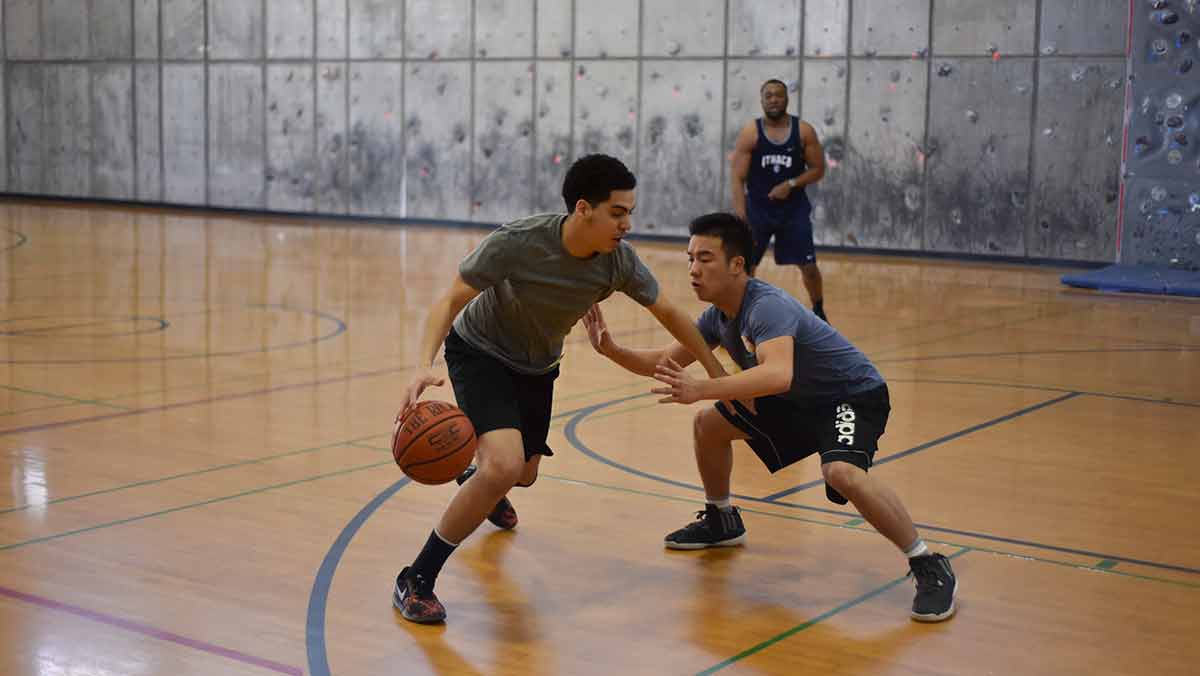 Jade Cardichon/The Ithacan
Sophomore Daniel Nunez challenges his defender, freshman Tony Luo, during the three vs. three basketball tournament hosted by Brothers 4 Brothers and the Ithaca College Asian American Alliance in the Fitness Center. A total of $240 was raised during the event.
By Justin Rouzier — Staff Writer
Published: February 22, 2016

On Feb. 20, two student organizations, Brothers 4 Brothers and the Ithaca College Asian American Alliance, worked together and held a three vs. three basketball tournament to fundraise for both organizations in the Fitness Center gyms.

This event was not exclusive to Ithaca College. Two of the 12 teams that participated were from Cornell University. The admission fee was $5 per player.

Co-president of ICAAA Candice Tan said the goal was to get the Ithaca community more involved in ICAAA’s events.

“Varsity basketball players in high school and college aren’t allowed to play because they can’t get hurt while out of season,” Tan said. “But we want to be all-inclusive and have lots of different people come together and play.”

There were several people on the court who weren’t associated with either organization. Men and women alike came out just for the fun and competition.

ICAAA treasurer Kenny Li said there was a friendly atmosphere throughout but plenty of competition on the court.

“People wanted to win,” Li said. “I know I wanted to win. I knew some of the guys, so I started game planning on how to beat them. I did my best.”

Tate, who is also a member of Brothers 4 Brothers, said regardless of the outcome, this event was special to him.

“It means a lot to me to be able to fundraise for our organization,” Tate said. “This event was about bringing people together, and that’s what it did. No matter who you are, you came out here to have fun and play basketball.”

The collaboration of Brothers 4 Brothers and ICAAA is a new trend of student organizations, which is intended to bring even more people together in a safe, multicultural environment. The $240 that was raised during this event will help fund future events for both organizations.

Eddy Tapia, co-president of Brothers 4 Brothers, said working together with other organizations will be beneficial to the African, Latino, Asian and Native American community.

“We reached out to the Asian American Alliance, and we both decided it was in our best interest to do something together,” Tapia said. “We wanted to further the co-sponsoring spirit, and we’re hoping this is a building block for more events.”

Both Tapia and Tan said they were happy with the success of the event and that they’re hopeful the event can grow. The event received funds from both the Student Government Association and the Residence Hall Association at Ithaca College, and Tapia said he hopes this will be the start of making this an annual event.

“Getting two Cornell teams was a great start for us, and we hope it can continue,” Tapia said. “I can see this tournament continuing for years, and I hope it does. When Brothers 4 Brothers or other organizations reach out to the Ithaca community, everyone benefits.”