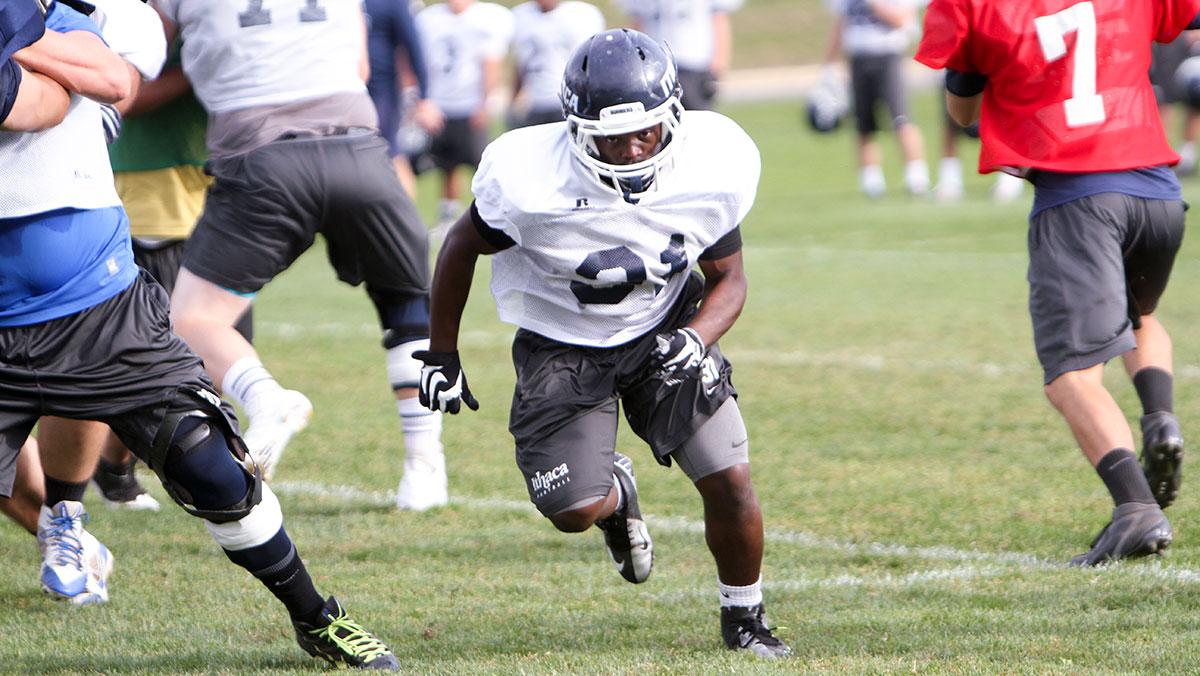 There is no clearer indicator of the football team’s inconsistency over the past five years than the fact that it has had five different starting running backs. The Bombers have seen graduations, injuries and unexpected departures prevent them from finding a featured back to build their offense around. This year, freshman Tristan Brown and sophomore Shawahl Abdur-Rahman are sharing the responsibility and trying to fill an unexpected void.

Then-freshman Evan Skea’s dismissal from the team last spring and a preseason injury to senior Tommy Padula created an unexpected need for the Bombers at the running back position, allowing Brown and Abdur-Rahman to become the featured backs. They have split the responsibilities equally through two games, with both receiving the same number of carries. Though it is a coincidental stat, it does reflect offensive coordinator Ryan Heasley’s view of both running backs.

“They do what we ask them to do,” Heasley said. “I think they’re both very dynamic players … Each one of them run the same complement of plays. They both have acclimated well into what we do.”

Heasley said both Brown and Abdur-Rahman have exceptional vision, which ideally fits the offensive scheme. Abdur-Rahman added that the run plays used in the Bombers’ offense are very similar to the plays he ran in high school, which has helped facilitate his acclimatization to the college game. He is also helping Brown make the same transition from high school to college that he made one season ago.

“I just tell him to enjoy it,” Abdur-Rahman said. “You never know when it’s going to be our last time playing on Saturday, so just enjoy it as much as you can.”

Brown has been the more prolific running back, averaging about 7.8 yards per carry. While that average is inflated by his 67-yard touchdown run against Hartwick College on Sept. 20, his statistically pleasing early-season start is made more impressive by the fact that he is not a starting running back. Head coach Mike Welch said he has no qualms starting either player.

“It’s what we started with, and it’s working,” Welch said. “We could start either one of them.”

Welch added that he can use either running back in any situation during the game, whether it be third-downs, the red zone or in the fourth quarter. Though both are inexperienced, the biggest concern with the duo is their lack of size. Brown is listed at 5 feet 7 inches tall and 160 lbs. Abdur-Rahman is 5 feet 3 inches tall and 165 lbs., making him the smallest player on the team. Despite the apparent lack of size, Heasley said the two of them are strong enough to be successful as running backs.

“If you want to watch the film and watch contact and what they do after contact … they’re younger guys, they’re smaller guys, but don’t tell me they’re not physical,” Heasley said.

Aside from the different sizes, the running backs both agreed that Brown is faster, but Abdur-Rahman is the better blocker. The Bombers are going to continue having Brown and Abdur-Rahman split the number of carries, which is fine with both of them.

“We all support each other as running backs, no matter who it is,” Brown said. “We don’t really worry about who’s getting what carries. We’re just on the sidelines supporting each as we do our best.”