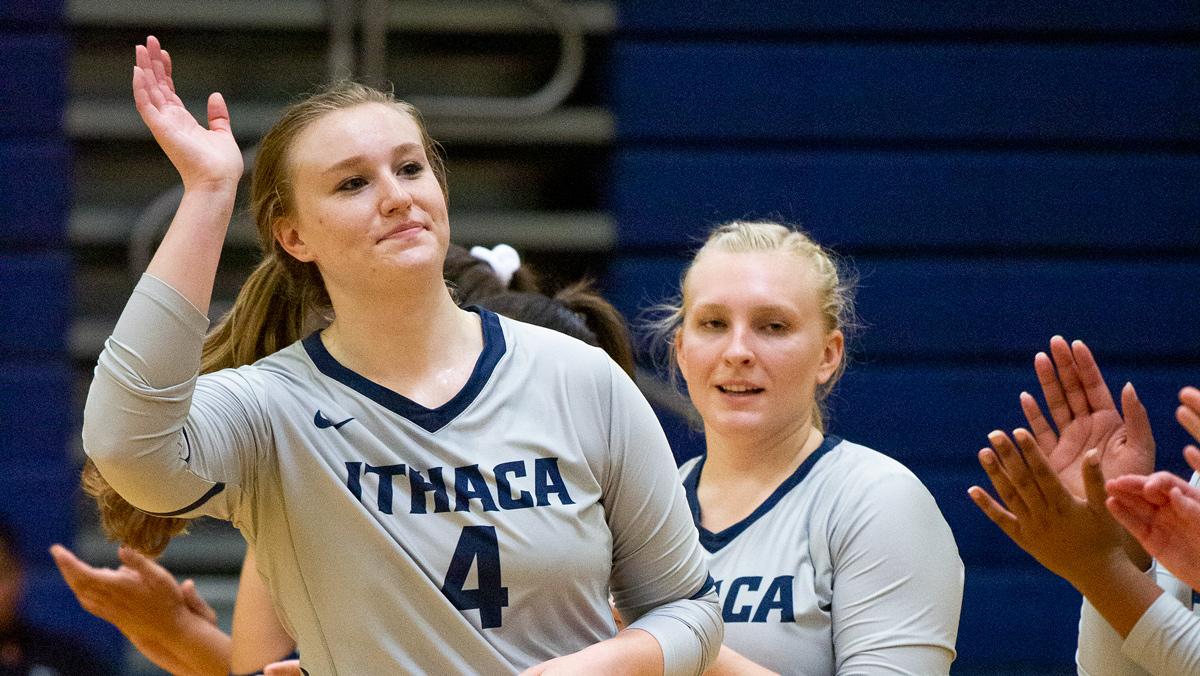 JILL RUTHAUSER/THE ITHACAN
Sophomore volleyball player Alison Lipton waves at the crowd as her name is announced in the starting lineup for the Bombers' game against Ohio Wesleyan University on Aug. 30 in Ben Light Gymnasium.
By Shehanee Fernando — Staff Writer
Published: September 4, 2019

Sophomore outside hitter Alison Lipton has been a starter on the Ithaca College women’s volleyball team since she joined the squad last fall. In her freshman season, Lipton notched 156 kills — the third-highest total on the team — and had a hitting percentage of .179%.

Lipton suffered an injury last season, but after going through the recovery process, she said she is ready to go for 2019. At the Bomber Invitational on Aug. 30 and 31, Lipton posted 30 kills across three games. She is currently second on the team in kills to junior outside hitter Reagan Stone.

Staff writer Shehanee Fernando sat down with Lipton to discuss her reflection on last season and her goals for the upcoming year.

Shehanee Fernando: How did you feel after last season?

Alison Lipton: It was a really great feeling to see all the hard work that paid off throughout the season. We obviously didn’t go as far as we would have liked to have gone, but to just make it to that point and see everything we worked so hard to get to that point was really amazing. Moving forward from that, I know the feeling now, and I know that I want to feel that again and go even further.

SF: What is the biggest lesson you learned from last year?

AL: The biggest thing that I learned in terms of coming to Ithaca is that change isn’t always easy and it takes time. With last season, I learned it takes every single person on and off the court giving 100% to get where we want to be. We all have the same goal in mind, and we can’t do it with just the six people on the court. It has to be every single one of us striving to reach that same goal.

SF: How have you recovered from your injury?

AL: It takes a lot of hard work off the court. I spend a lot of time in the AT clinic rehabbing, doing treatment and everything like that, making sure I stay on top of my responsibilities off the court.

SF: How have you improved since the start of last year?

AL: I think going into practices, games, lifts and all of our training sessions with the attitude of “I’m going to give everything I have left in me for the day” is something that I have worked to improve and is something that I will continue to work towards and use in the future.

SF: What are your individual and team goals?

AL: One of my individual goals is working on my mindset. Knowing that the best that I can be is going to vary from day to day and understanding that if I give everything I have in me for that day then that is all I can ask of myself is something I want to focus more on. One of my team goals is getting back to where we were last season, if not further, and we just want to train as hard as we can and work as hard as we can and overall enjoy what we are doing.

SF: What are you looking forward to this season?

AL: Honestly, I am just looking forward to playing again with a great group of girls. I love everybody on the team, and I am excited to be here already practicing with them. I’m also looking forward to growing as a team and creating memories together for years to come, whether that be on the court, in the weight room, on the bus when we travel, etc. I can’t wait to see where we end up this year.

SF: Why do you enjoy being a part of the volleyball team?

AL: It is an automatic built-in family, and I love that. Even last year, coming in as a first-year, I already knew that I had a group of girls that I got to call my own family here at Ithaca. That’s the biggest one. The second one is that we push each other not only on the court but in life in general. We want everybody to be their best, and we want to be there for them to help them and push them with whatever they need, whether it be homework or a test or a personal situation. It is just nice to know that there are other people around you that want you to be the best you can be and to have people that you want that for as well.

Correction: A previous version of the story stated that Lipton’s injury was season-ending and that she did not compete in the Bombers’ game against Emory University on Nov. 15. It has been updated to reflect that Lipton was able to compete against Emory.

Volleyball falls in the NCAA Quarterfinals