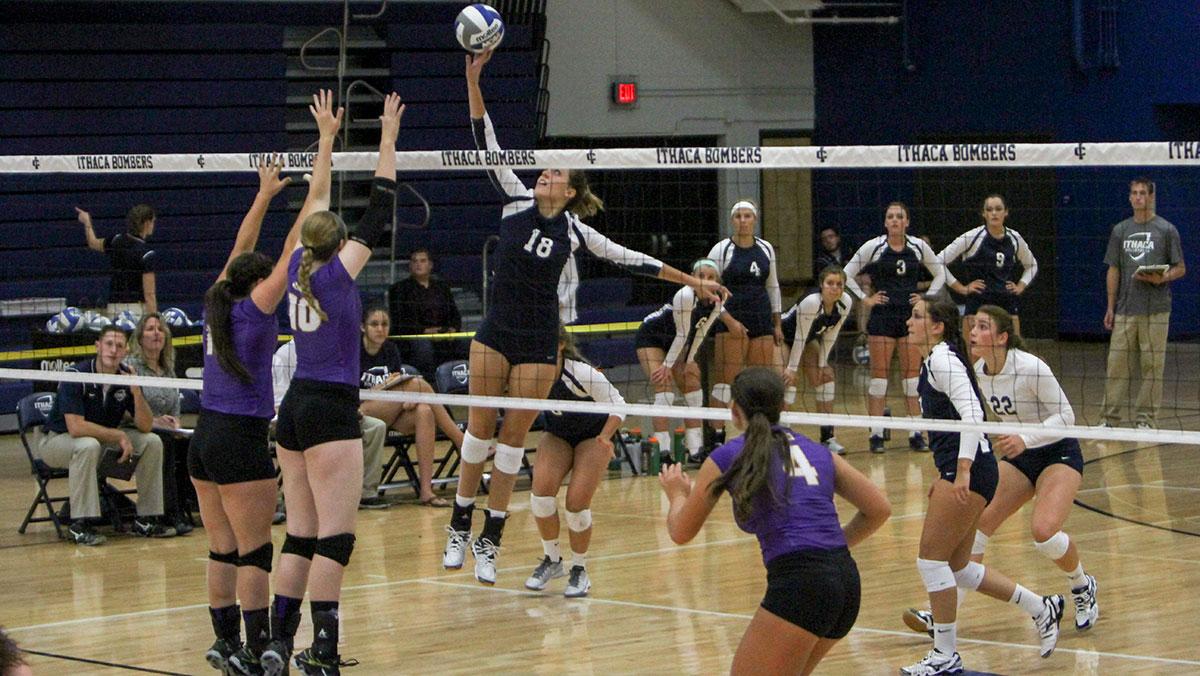 The volleyball team was perfect in the Bomber Invitational beating opponents Alfred College 3–0, Wells College 3–0 and Widener University 3–1, on Sept. 11 and Sept. 12.

On the first night of the Bomber Invitational, the Blue and Gold came out strong against Empire 8 foe Alfred. The Bombers swept the Saxons in their home opener, taking the sets 25–14, 25–13 and 25–15. Over the course of the last nine seasons, the Blue and Gold have won all 10 games against Alfred, nine of which were sweeps.

The volleyball team did not trail for a moment in either of the first two sets against the Saxons. The Bombers hit a solid .333 on the night, with only 13 attacking errors.

Freshman middle hitter Katie Evans put on a show for the large crowd in the Ben Light Gymnasium. She collected 10 kills on a .833 hitting percentage, one ace and two blocks. Sophomore Joelle Goldstein, a 2014 First Team All-Empire 8 selection, also picked up 10 kills on the evening, to go along with three aces and one block.

Sophomore captain Kayla Gromen had 31 assists to go along with nine digs, five kills and one ace. Freshman Hailey Adler paced the Bombers’ defense with 12 digs.

Gromen said it was nice being back on the home court to give the Bombers the added positive energy to succeed.

“It was so nice to have the crowd to give us momentum on big points,” Gromen said. “Whenever there are people at our games, the cheering and such really helps to feed into our determination and pumps us up.”

The Bombers started off Saturday with the sweep of Wells. The Blue and Gold swept the Express with scores of 25–21, 25–17 and 25–19. Over the course of the last four seasons, the Bombers have taken four of five from the Express, three of the matches coming as sweeps.

The South Hill squad came out swinging against Wells, hitting .233 as a team and collecting 36 kills with only 15 errors. Though the Bombers trailed for a majority of the first set against Wells, they tied up the game at 14–14 and did not look back.

Gromen said she attributes the Blue and Gold’s comeback to the squad’s determination.

“This team doesn’t give up on anything, whether it’s a shanked ball, a tip coming towards them or even if we’re down a few points,” she said. “If anything it just helps us focus in and think, ‘OK, we have to start playing now.’ I think every time we got down a few points the next server knew they had to get back to the line quickly and focus on getting us as many points off of their serve as they could, and that’s exactly what they did.”

Goldstein, who collected 11 kills and three aces against the Express, led the volleyball team’s offensive efforts. Gromen dished out a match-high 27 assists with no errors on top of six kills and four aces. Adler picked up nine digs for the Bombers’ defense. Senior captain Dylan Gawinski-Stern put up seven digs for the Blue and Gold with only one receiving error.

In a match that teetered back and forth, the Blue and Gold were able to edge out Widener on hitting percentage, swinging .174 on the day versus Widener’s .130, and the Bombers were able to pick up 49 kills.

Evans once again led the volleyball team’s offensive attack by tying her career-high 14 kills. Freshman outside hitter Kyle Dandrea made a huge impact on the South Hill squad’s offense and defense. She had a career night, picking up 10 digs, eight kills, three blocks and two aces. Gromen dished out a match-high 38 assists to go along with eight digs. Gawinski-Stern was strong in the back line for the Bombers, picking up 19 digs.

The South Hill squad is back in action Sept. 15 when it travels to Elmira College for an Empire 8 matchup at 6 p.m.