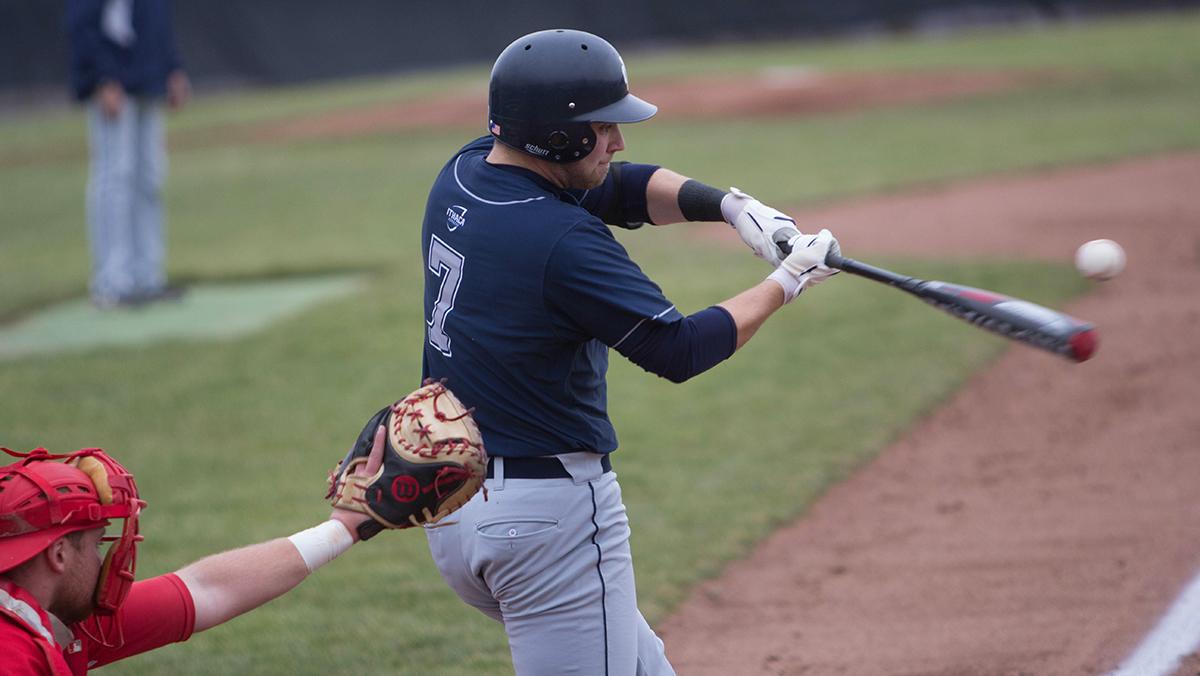 CAITIE IHRIG/THE ITHACAN
Senior Trevor Thompson at the contact point in his swing during the Bombers' home game against SUNY Oneonta. The team travels to Elmira, New York to play Elmira College in a triple header April 8 and April 9.
By Matt Maloney — Staff Writer
Published: April 6, 2017

With the season in full swing, here’s what’s happening this weekend for the Ithaca College spring sports teams.

The baseball team has three games in Elmira, New York, this weekend against Elmira College. On April 8, the team plays a doubleheader with games starting at 1 and 3:30 p.m. Then, the Bombers take on Elmira for one last contest on April 9 at 1 p.m. After dropping a game earlier this week to SUNY Brockport, the team is looking to get back on track with a win this weekend.

Softball is home to a pair of doubleheaders this weekend. On April 8, the South Hill squad takes on Nazareth College at Kostrinsky Field at 1 and 3 p.m. Following this, the Bombers will face St. John Fisher College on April 9 at 1 and 3 p.m. The Bombers won both games in a doubleheader against Houghton College this past Wednesday.

The men’s lacrosse team travels for a conference matchup against Nazareth College in Rochester, New York, on April 8 at 1 p.m. After two consecutive heartbreaking overtime losses, the team wants to improve their record.

Women’s lacrosse is home April 7 at 4 p.m. against SUNY Geneseo in a nonconference matchup. A win this weekend would keep its undefeated home record alive after dropping a game to the nationally ranked William Smith College on April 4.

Men’s tennis plays on April 8 in Ewing, New Jersey, to take on The College of New Jersey at 9 a.m. The team looks to remain undefeated in conference play.

Women’s tennis has an away match on April 8 against The College of New Jersey at 11 a.m. After dropping a match to the University of Rochester at home April 4, the team hopes they will be able to get a win on the road.

Men’s and women’s track and field teams head to Bethlehem, Pennsylvania, to compete in the Coach P Invitational beginning at 10 a.m. The women’s team is coming off to a great start to the season with five first-place wins in last week’s Muhlenberg Invitational. The men’s team is looking to get first place after coming up short at the invitational.

Women’s golf is traveling to Poughkeepsie, New York, for this weekend’s Vassar College Invitational beginning at 12 p.m. The golf team opens up its spring season after its spring trip to Myrtle Beach, South Carolina.

Both crew and track and field have their first meets of the spring season. Baseball, softball, men’s and women’s lacrosse, and men’s tennis are away.

Weekend Preview: Spring sports are on the road