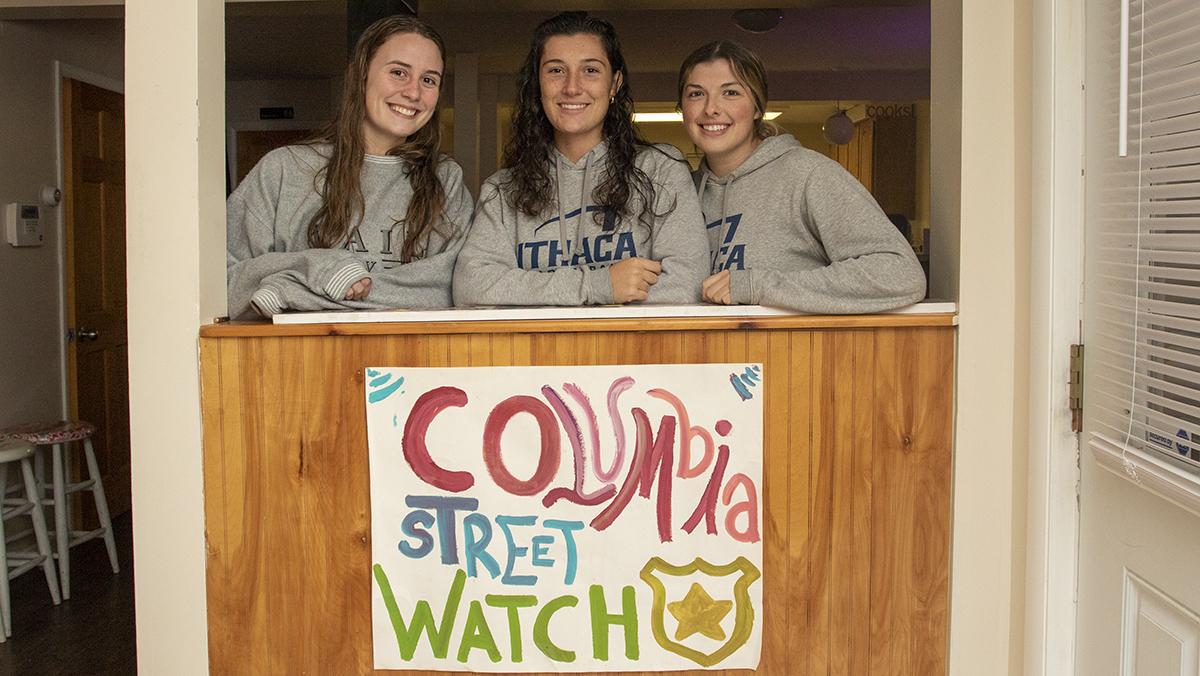 On the basketball court, the Ithaca College women’s basketball team has the chemistry, camaraderie and cohesiveness of a championship team. However, the team does not only foster its connection in Ben Light Gymnasium — the team has bonded at the off-campus house where three of the team’s seniors live.

Currently, three seniors — Lindsey Albertelli, Melissa Buxton and Cara Volpe — on the women’s basketball team live in the house. Buxton said the group of players has been living there since last year, when all of them were allowed to live off campus. For the team, the house means more than just a place for some of its players to live. For many student-athletes, living with their teammates is not something that is rare since it also provides a place for the team to get together with limited space on campus.

“We love hosting team events at the house,” Buxton said. “Our most recent one was a bake-off. We randomly generated teams and groups, and then everyone had to bake something, and we all tried it and voted. So, I thought that was really fun.”

Before moving into the house together, the players lived in on-campus housing, in which they dealt with conflicting schedules with their roommates.

“I lived with a volleyball player freshman and sophomore year, and so it’s been different now because we all have the same schedule,” Albertelli said. “So we’re all at practice at the same time, which is nice because my roommate would have 6 a.m. practice, so I’d be woken up at 6 a.m. So, having the same schedule is nice with the movement in and out of the house.”

The current residents of the house also recognize the importance that living with fellow teammates has meant for all of them. For them, having the same schedule as their teammates has been useful for each of them staying on top of their classes, as well as making sure each other is not missing training.

The players also like the current setup with the house because it allows for more involvement with the team and lets two other people be involved in decision making, something that the players recognize as a value.

“It’s nice to have two sets of ears and eyes with practice stuff and just in general,” Volpe said. “It’s nice just making sure we all know what’s going on and making sure we’re all on the same page.”

Living with teammates has been popular for decades for student-athletes at other institutions as well. Sharing a common interest in a sport helps, but it also allows them to find other teammates with similar academic interests and hobbies. However, some teammates do not live together to avoid potential conflict and negatively impact the team’s dynamic.

For the women’s basketball team, that is not the case. The house represents not only a place for current players, but also as something to tell potential recruits about. In recent years, the team has used the house as one of its selling points to some recruits when they visit the college.

“We definitely have talked about the house, just because this house right now has been in the basketball team for three generations, we always talk about it,” Volpe said. “We had two of our freshmen here after they had committed for a pizza party on their visit.”

Freshman Jillian Payne was a senior in high school at the time when she first met the team and visited the house. Payne recalled her first impression of it was that the house had everything a college student could ask for.

“Being at [the house] every weekend has given not only me, but all of the first-years on our team an opportunity to get very close with our team,” Payne said.

Payne added that her favorite team activities she has done at the house have been the bake-off, as well as movie nights and playing card games.

While having recruits visit the house is a rare thing, players and the team do try to give recruits a team experience, looking to give them a sense about what the house means to the team.

“Typically, we don’t have recruits at the off-campus houses, but they know that we all live together,” Buxton said. “They have to stay in the dorms when they come and visit, but we try and do something as a team when recruits are here.”

“When the alumni come back and visit, they love coming here and seeing how their old rooms are set up,” Buxton said. “They love seeing how we have tweaked things. That is something I really love.”

Former players visit nearly any time of the year, but alumni weekend is typically a popular time. Cassidy O’Malley ’20 returned to the house during this year’s alumni weekend and said it brings back memories of her time in college hanging out with her roommates or hosting gatherings with friends.

“I love seeing the younger girls taking over the house, and I hope my younger sister who is a freshman on the team can eventually live there too,” O’Malley said. “It’s super funny to see how everyone uses the space differently. For instance, the girls that live downstairs right now are way more into decorating the place than we were.”

With the season starting Nov. 13, the players are still planning on hosting team events for the rest of the year. The players want to take advantage of the opportunities the house provides for them and hope to build team chemistry going forward. For the three seniors currently living at the house, being there has been a good experience for them, and has provided them with fun memories of team events.

“Living with the girls on the team has made it a great place to host everyone for numerous events,” Buxton said. “We get to know each other past basketball because this team is much deeper than that. I know we will all be friends forever and return back to Ithaca College and continue to support the program.”