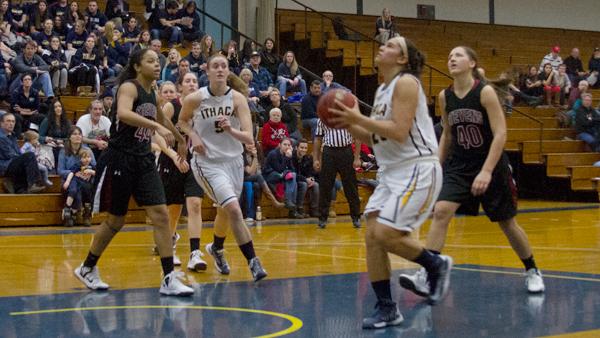 Everything went right for the women’s basketball team Friday as the Bombers defeated Stevens Institute of Technology 92-55 in Ben Light Gymnasium.

Ithaca never trailed during the game and led by double digits for more than half the contest. Though the Blue and Gold shot 59 percent from field goal range and achieved their highest point total of the season, the true story is in the South Hill squad’s tenacious defense.

The high energy and pressure the team exhibited from the first whistle forced the Ducks to become flustered. As a result, the Bombers were able to score 20 points off of turnovers and get 13 steals.

The team was also able to prevent Stevens from getting a lot of looks inside the paint and play the post. Junior guard Mary Kate Tierney said the Blue and Gold’s strong defensive play was a team effort.

“Our post players did phenomenally,” Tierney said. “They fronted, they battled and we had help defense. The whole team played really well defensively tonight.”

The game also featured players who set new career marks. Junior guard Jenn Escobido led the Bombers with 23 points, a new personal record for points in a contest, as well as a career-high five steals. Tierney achieved her first career double-double with 14 points and 10 rebounds. Escobido said that the team’s success on defense carried over into their offense.

“Our defense definitely fueled our offense,” Escobido said. “I think with us getting stops we were able to get out in transition, and a lot of that helped with the flow of the game.”

Sophomore guard Ally Mnich said the South Hill squad is using their loss to St. John Fisher on Jan. 18 as motivation to push themselves harder in practice, and the results are evident on the court.

“Ever since our loss [against Fisher] we’ve all just kind of been really mad and hitting the gym more because we kind of realized that we’re not invincible,” Mnich said. “We’ve definitely been working harder and pushing each other a lot more in practice so we can handle pressure situations.”

The Blue and Gold have two new additions to their roster as junior varsity players Christie Bonacci and Julie Schaeffer were pulled up to varsity. Both players saw playing time and contributed offensively. Escobido said that Bonacci and Schaeffer have been able to fit right in with the team.

“They’ve been doing great,” Escobido said. “It’s definitely nice to have fresh legs in practice and a new look on things. They’re hustling everywhere and I think that’s a big part because we’re pushing ourselves to keep up with them.”

Though the Bombers played what Tierney called one of their best games of the season, the team will have to make a quick turnaround as they will play Hartwick College tomorrow in Ben Light Gymnasium. Mnich said that the South Hill squad wanted to make a statement this weekend, and plan to continue doing so against the Hawks.

“We have Hartwick tomorrow, and we just want to destroy them as well and make sure that everyone knows that we’re not here to mess around,” Mnich said. “We went out to make a statement [tonight] and we definitely did. We never let up and I think the Empire 8 is going to have someone to watch out for.”