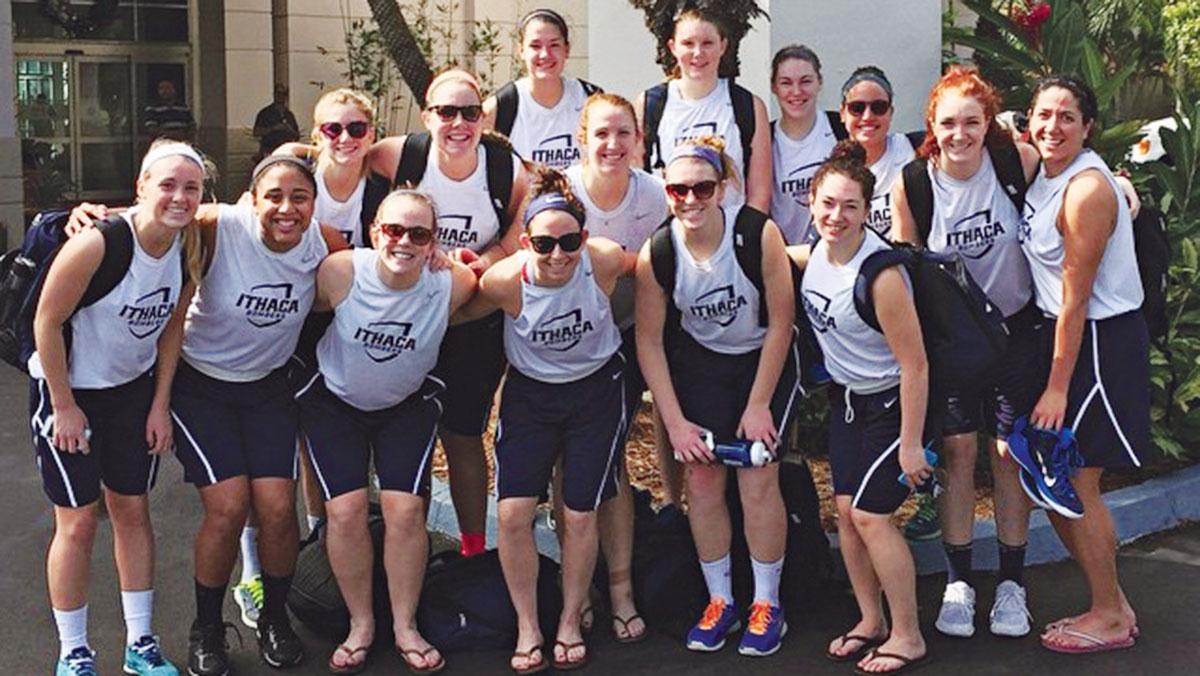 After a long fall semester, most students like to spend their time away from campus with their families or catch up on their favorite television shows on Netflix. For Bomber athletes, though, winter break is an important time to train, focus and keep a competitive edge.

The women’s basketball squad is no exception. Instead of waking each morning for a few classes and heading to work out in the afternoon, the players’ days are usually spent eating, practicing, lifting weights and sleeping. They often stay up late with their teammates, hanging out and watching movies.

This year was different, however, as the team enjoyed a special trip. The Bombers returned from the holidays by traveling to Puerto Rico to participate in the San Juan Shootout for two games Dec. 28–29.

Senior guard Sam Klie said although the program does a big trip every four years, it is not an all-expense paid trip. Because of this, they had to raise funds to travel out of the country, mostly through two campus-wide basketball tournaments, called Pre Exam Slams, that the team has organized each November for the past two years.

“Every class is guaranteed one trip, so this was ours,“ Klie said. “[The seniors] have been wanting to go to Puerto Rico forever, so we fundraised a lot of money.”

The players cherished the five days they spent in the lively town of San Juan, nestled against Puerto Rico’s northeast coast.

They spent most of their free time enjoying the full-island experience by visiting the beach, sitting by the pool and walking around the city as any tourist would.

Klie said the trip had a tourist feel to it and that they interacted with some of the local natives.

“We were on the strip with a bunch of hotels, so we were able to walk everywhere,” Klie said. “We went to Old San Juan, saw locals and a lot of tourists, too.”

But the trip turned serious soon enough, as most of the teams in the tournament have NCAA tournament ambitions. The team had two games lined up against SUNY Plattsburgh and Cabrini College.

There were 10 total teams in the tournament, and the Bombers shared a hotel with some of the other teams, often bonding with them by the pool.

Before games, Cotrupe said, the arena played salsa music while the teams warmed up, which sharply contrasts with the pop and hip-hop music that the team is used to listening to at home in Ben Light Gymnasium.

Senior forward Francesca Cotrupe said the gymnasiums they would practice in differed from the renovated college gyms they play in back in the United States.

“We had a shootaround at a YMCA,” Cotrupe said. “It was this old, run-down gym. It was very different than [Ithaca].”

Cotrupe went on to say that being in another country where English is not the dominant language made it difficult at points for the players, especially when the referees took the court. They would call players’ numbers using Spanish.

To help getting accustomed to the new culture, many of the athletes’ parents attended the games to share the experience with their daughters. Cotrupe said having their parents there was a good source of support, since not many locals showed up to the games.

Though the team dropped both of its games in Puerto Rico, the trip was about more than just basketball as the squad tried new things, including a newer form of seafaring called banana boating.

Similar to water skiing and wakeboarding, banana boating accommodates three to 10 riders sitting on a large tube while resting their feet on two lateral tubes side by side to help steady the boat. The main tube is often yellow and banana-shaped, hence the label.

In order to fit on the tube, the team had to split in half. Klie said she loved it and Cotrupe said she hated it, but they both agreed it was worth the experience.

The experience of flying together and traveling over winter break was new to the South Hill squad, too. The Bombers played in Hawaii four seasons ago, however, none of the current players on the roster were around for that trip. Cotrupe said the four seniors on the team highly anticipated the trip because they heard about the Hawaii trip from their now-graduated teammates.

“We had been waiting for this for four years,” Cotrupe said.

The team returned to Ithaca in time for the new year, but the focus was on basketball from there on out. The Bombers played in five matches the first two weeks in January and are on a five-game win streak heading into the rest of conference play.

During winter break, the team’s days revolved around practice. Most days practice was from noon to 2 p.m., but at other points they would have the earlier slot from 9–11 a.m.

Even though the team focused on basketball for much of the time, it enjoyed a fair amount of bonding over break. Since the freshmen could not stay on campus for housing because the dorms were closed, they lived with the upperclassmen.

To pass the time that they were not in practice, the Blue and Gold attended a Syracuse University men’s basketball game and roamed around the Destiny USA mall in Syracuse for a day, which helped the bonding experience that much more.

Cotrupe said she bonded closely with her underclassmen teammates and that winter break is a great experience for the freshmen.

“The two freshmen I stayed with I got closer with on and off the court,” Cotrupe said. “Now we are able to discuss on- and off-the-court topics. It just made us that much closer.”

Sophomore forward Shayna Gaskins, who lived off campus with older teammates, said the bonding experience she had with her teammates throughout the winter break is advantageous for the team as it progresses into the second half of its season.

“You get closer [as a team] over break because you’re always together,” Gaskins said. “It’s very different.”