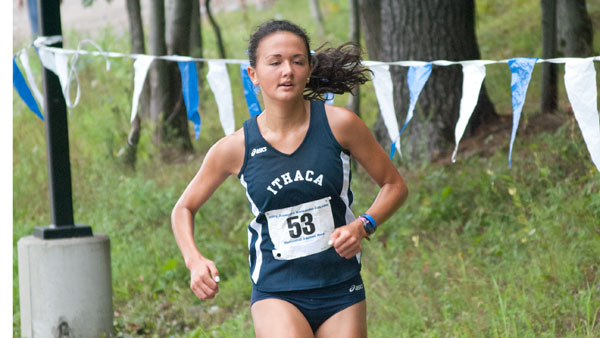 Beating the clocks and the competition, the women’s cross-country team secured another top-10 finish at the NCAA Atlantic Regional Championship on Nov. 16 at Letchworth State Park in Mt. Morris, N.Y.

With little wind chill accompanying a flat and fast course, many of the runners for the women’s team were physically challenged in the 6K race but pushed through to gain sixth place out of 38 teams. Graduate student Jenn Randall broke her 2009 career-best time of 22:13.00, crossing the finish in 21:24.60.

Just a minute behind Randall was junior Alexa Rick. After placing 24th at the NCAA Regional as a sophomore, Rick hoped to improve on her time and place this season, but she just missed. Rick placed 35th out of 269 runners with an overall time of 22:37.00.

Though she earned a spot on the All-Atlantic Region team by finishing in the top 35, the race was anything but easy for Rick. Mentally prepared with a good attitude, she struggled to find the strength to push herself to the end.

“Physically, sometimes your body is just not there,” Rick said. “I was not feeling great, but I tried to keep pushing the entire time.”

Fighting the struggle, Rick thought of advice she received from her coaches moments before the race to break down the course into segments. Already past the start 2 miles into the run, she rounded off a hairpin turn and entered onto a mile-long straightaway.

Despite her disappointments, she kept her composure and managed to push herself past the finish.

“I went into the race hoping to get into the top 15 and run a 22 flat race, but that didn’t happen,” Rick said. “Everyone has bad days, but I wanted to score lower for the team.”

Junior Hannah Wright faced similar challenges within the race. Wright found the most challenging aspect to be adjusting to the playing atmosphere of a larger competition.

“I got overwhelmed by the size of the race, and it was very different than any other race this season,” Wright said.

Working past a rough start, she managed to break through the pack and gain her a place in the stream of runners. Though she never found a consistent pace within the course, Wright finished in 66th place and gained a new personal record with a time of 23:06.00.

“I did well in terms of times,” Wright said. “I PRed, but I didn’t feel good, I was hurting really badly.”

This season has been one of the best for the Bombers, especially at an individual level where many runners have repeatedly broken personal records. At the NCAA Regional race, at least six of the seven top finishers ran their fastest race yet.

Junior Meghan Cass said the team worked well together by using other runners in front of them as incentives to get in a better position. Leaving everything on the course, Cass completed the race in 23:38.80, placing 103rd overall. For Cass and the rest of the women’s team, attending nationals would justify all their hard work throughout the season.

“It just proves to everyone else not necessarily how good we are, but how much work we put in, and we really deserve it,” Cass said.

The team anxiously waited for the national competitors to be announced Nov. 17 in the Athletics & Events Center. Fortunately, the Bombers won an at-large bid and will race their top seven runners at the NCAA Championships in Hanover, Ind., on Saturday.

Because the squad has multiple returners who attended nationals last season, including Cass and Rick, the team is ready to improve from the year before.

“Last year was more fun for me, and I didn’t know what to expect,” Cass said. “I think this year, since more of us have already gone, we are more prepared to do well there.”

This will be the 21st time in program history the squad has qualified for nationals, and it has set the bar high for the women’s team moving forward.

“We’re just hoping for the best, and we’re going to try and improve again,” Rick said. “I don’t know what the course is like there, but I guess we’ll see.”