Women’s cross country searches for path back to NCAA Championships 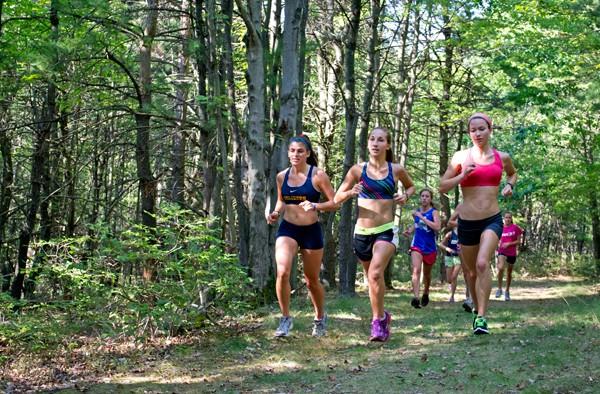 Under the leadership of an untested head coach, the women’s cross country team is embarking on a path back to national prominence.

The Bombers missed the chance to qualify for both the individual and team national championship meets last season — something that has not happened since the turn of the millenium. After six years as an assistant, Erin Dinan is stepping up to take over the program following the retirement of Ithaca College Hall of Fame member Bill “Wally” Ware, who led the Bombers to 17 nationals in 24 years as a coach.

Dinan said it has been strange at times this preseason, having to replace a legendary coach who built the college’s cross-country program into an East Coast powerhouse.

“It’s nerve-racking and very exciting,” she said. “But it’s weird not having Wally around here.”

While the Bombers lost four of their top seven runners from last year, they are returning two seniors this year who had been members of the top seven as underclassmen and have struggled with injuries since. Meghan Shanley was the only member of the team to run at nationals when she went with the team as a freshman, and Meghan Schenk was a part of the top seven as a sophomore. Schenk said she spent all of last year struggling with a hip flexor strain, but is on the road to recovery.

“In the fall I was in the pool everyday,” she said. “I’m still in physical therapy just to be cautious.”

Five senior women on the team lived together this summer while taking classes for their physical therapy majors, which senior Ebonie Howard said made the team grew closer.

“It was nice having a core group of girls to run with on a daily basis,” she said.

While Ware only coached cross country, Dinan is an assistant for the track and field team as well. The Bombers’ new coach said the team’s training will be altered slightly to account for the team racing in more six-kilometer races instead of five-kilometer races this season.

“Over the past couple years the distance for women’s cross country races has increased,” she said. “Last year we were doing a lot of 800s and 1,000-meter repeats; this year we’ll be doing 1,200 or mile repeats and some three-mile tempo runs.”

Senior Rachel Spirito said Dinan’s expertise with the track and field teams should make the South Hill squad’s training this year more consistent between the fall, winter and spring seasons.

“We have Wednesdays off and practice on Sundays this year, which we’ve done in the past for track but never for cross country,” she said. “Last year when we did workouts we would just be told to run as fast as we can. This year we’re going to given times to hit and be grouped among runners of similar abilities.”

Dinan has set the bar higher from the start by shortening the time athletes need to run to make the team — depending on the number of years they have been on the team. In the past, runners had to clock in at under 13 minutes for 3,000 meters to make the team, but this year the time drops five seconds for each year of experience a runner has.

“I think people were a little scared when I told them, but I don’t think we’ll have any problems,” she said.

Amid a changing of the guard with both players and coaching, Dinan said she expects the Bombers to return to the national stage.