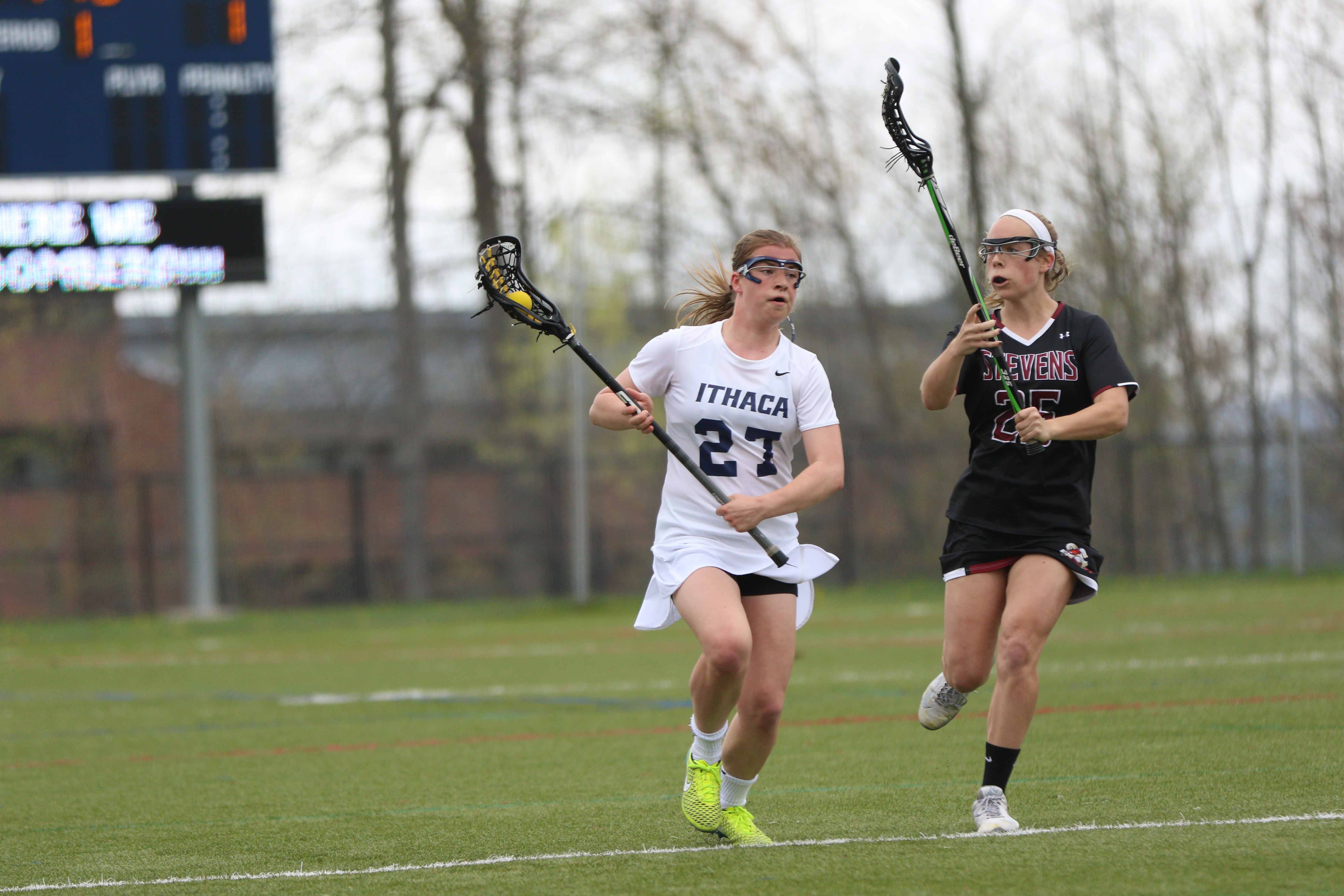 MANYA MARGOT/THE ITHACAN
Freshman defender Becky Mehorter runs with the ball and looks to pass it to a teammate before freshman attack Kyra Bednarski of Stevens catches up to her. The Bombers defeated the Ducks 13–9.
By Andrew Sullivan — Staff Writer
Published: May 1, 2017

The women’s lacrosse team clinched the regular season Empire 8 Conference title with a 13–9 victory over the Stevens Institute of Technology Ducks on Senior Day at Higgins Stadium.

Graduate student attacker Ally Runyon said the Bomber’s offense was electric, especially during the first half.

“We had a lot of energy going into the game,” Runyon said. “We were pumped because it was Senior Day, everyone was just ready for this game. We know it was going to be tough, we knew we had to come out hard, [Stevens] is a really good and team and they are really athletic.”

The Bombers opened up the scoring when senior attacker Morgan Racicot scored unassisted the first of her team-high four goals on the afternoon.

However, the Ducks’ freshman attacker Kyra Bednarski responded a little more than 20 seconds later with an unassisted goal to tie the score at one between the two squads, the first of her two of the match.

The South Hill squad would regain the lead a couple of minutes later with a goal by senior midfielder Morgan Cadwell.

Runyon’s unassisted goal more than halfway through the first period extended the lead 3–1 while also tying the college’s single-season record for goals with 61. She would eclipse this record just before the end of the period with her 62nd goal assisted by sophomore attacker Allie Panara, who also scored a first-half goal.

Runyon said she was aware of her achievement heading into the match, but was primarily focused on helping her teammates achieve the ultimate goal.

“I didn’t really think about that before the game because if you focus on like, ‘I need a goal,’ or ‘I need this,’ you’ll make stupid mistakes and turn the ball over,” Runyon said. “Offense works best as a team offense. So I try to think of what we need to do as a team on offense.”

By halftime, the Bombers held a strong lead over the Ducks 5–2. Junior defender Molly Long said the team’s first-half defense was sturdy.

“We came out really strong, and we played together all throughout the first half, which was awesome.” Long said. “Our help-sides were there. Talking was amazing. I think we … were amped up, and Kimberly [Presuto] was doing amazing on goals. So that just absolutely led us in the right direction.”

Presuto saved six goals in the first half, and saved eight in total in the match.

The Bombers immediately added to their lead during the first minute of the second period when Cadwell assisted senior midfielder Gaby Berne on a goal.

Despite the comfortable 6–2 advantage, the Ducks would storm back with four straight goals to tie the contest. Sophomore midfielder Mackenzie Metzler netted a goal thanks to a Bednarski assist. to slice the lead in half 6–3.

A little more than a minute later, senior midfielder Kathleen Kalbian scored unassisted to trim the lead to two. With another assist from Bednarski, junior midfielder Julianna Ricci pulled her squad within one with a goal.

Metzler scored unassisted the equalizer approximately two minutes later for the Ducks. She netted a team-high three goals on the afternoon.

Nonetheless, the Bombers went on a four-goal streak themselves, starting with Racicot’s second goal, giving her team a 7–6 advantage.

Runyon tacked onto her record total with her 63rd goal of the season with another assist from Panara.

Racicot scored her third and fourth goals thereafter, as the Bombers once again led the Ducks by four goals 10–6.

Runyon said the offense needed to focus on winning the draws in the second half.

“We really needed to just have everyone get off of the line and really focus on getting that ball off of the draw, and once we started getting the draw, we got the momentum back and we worked it out on offense and our offense was good today, so we put the ball in the back of the net,” she said.

But the Ducks were not down for the count just yet. With unassisted goals by senior attacker Laura Roberts and Metzler, the Bombers only led 10–8 as the halfway point of the second period drew near.

However, the Bombers would outscore the Ducks 3–1 down the stretch, with two goals from Panara and one from sophomore attacker Maeve Cambria.

The Bombers earned the No. 1 seed in the Empire 8 tournament with the victory. The squad will host tournament play on May 6 and 7.

Racicot said this year’s senior class is great, but she said she will miss the team as a whole more.

“I don’t think I will ever find this many people that I love,” Racicot said. “They are all … my best friends. I know people say that, but like our team is the best of friends.”

The Bombers’ next game will be played against St. John Fisher College at 11 a.m. May 6 at Higgins Stadium.

The Ithaca College women’s lacrosse team defeated Houghton College by the score of 17–4 in an Empire 8 conference showdown.