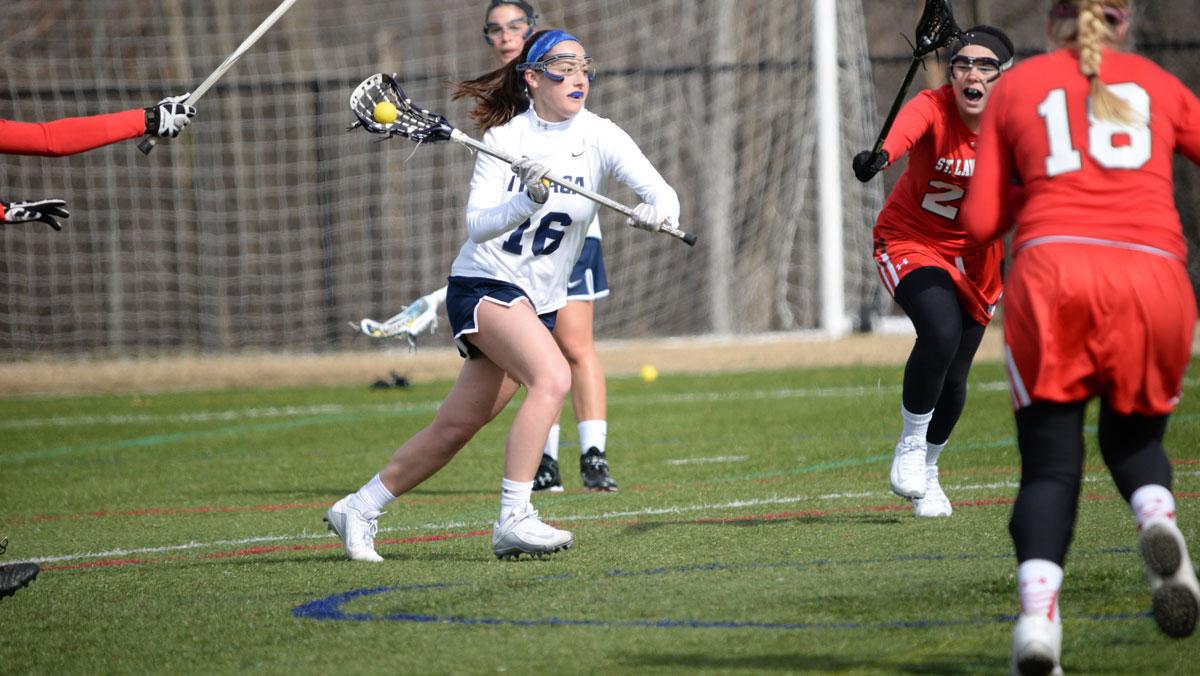 The women’s lacrosse team began its 2016 campaign against St. Lawrence University on March 5 in Higgins Stadium, by defeating the visiting Saints 15–7.

The Bombers finished the previous season with their third straight Empire 8 championship appearance and defeat. They came into their home opener looking to break the hopes of a Saint’s team who won its first matchup against Johnson & Wales University with a 16–6 victory.

The Bombers got off to a quick start, as at the1:30 mark, freshman midfielder Allison Panara intercepted a Saints defender pass and scored the Bombers’ first goal of the 2016 season. It was the first goal of Panara’s collegiate career. After Panara’s goal, the Bombers went on to score four more in the opening 10 minutes, taking the lead 5–1.

Two of those goals was scored by senior midfielder Riley Marion, who scored five goals and was the Bombers second leading scorer last season. Marion said it was important for the team to get off to a fast start like it did.

“We came out really strong,” Marion said. “I don’t think we thought we would be able to come out as strong as we did, but we rolled with it and it was awesome to do.”

It was a rough day all-around for the Saints, as the Bombers to consistently attacked their defense and left Saints’ starting goalkeeper Cricket Wemyss out to dry by giving up 10 goals in the first half.

The Bombers began the second half with a new goalkeeper, as head coach Karrie Moore decided to go with sophomore goalkeeper Kimberly Presuto. Despite the goalie change, the Bombers’ momentum from the first half did not deplete their defensive dominance of the Saints.

Freshman attackman Danika Wagener, who had a goal on five registered shots in her Bombers debut, said the energy from the first half scoring party was beneficial and helped calm the Bombers when things got more physical in the second half.

“It help set the tone,” she said. “We try to keep it going through the second half, and I think that was what won us the game.”

Panara opened the scoring in the second half with her third goal of the contest to increase the Bombers’ lead to 11–2 with 23 minutes left in the game. After a goal by senior midfielder Ally Lates, the team made some of its first mistakes of the season as it allowed back-to-back goals to the Saints in within a four minute span.

But the Bombers were able to stop any hopes of a comeback from the Saints when Marion went down the field and scored her fifth and final goal of the contest.

Marion said despite the win the Bombers do not want to make a habit of teams chipping away at the score when they rack up a considerable lead like they did today.

“We had kind of a lull in the second half,” she said. “That’s something we want to get rid of but I am happy overall how we played today.”

The South Hill squad returns to action at 4 p.m. March 8 for its first road game of the 2016 season against the 2015 defending national champions SUNY Cortland Red Dragons.