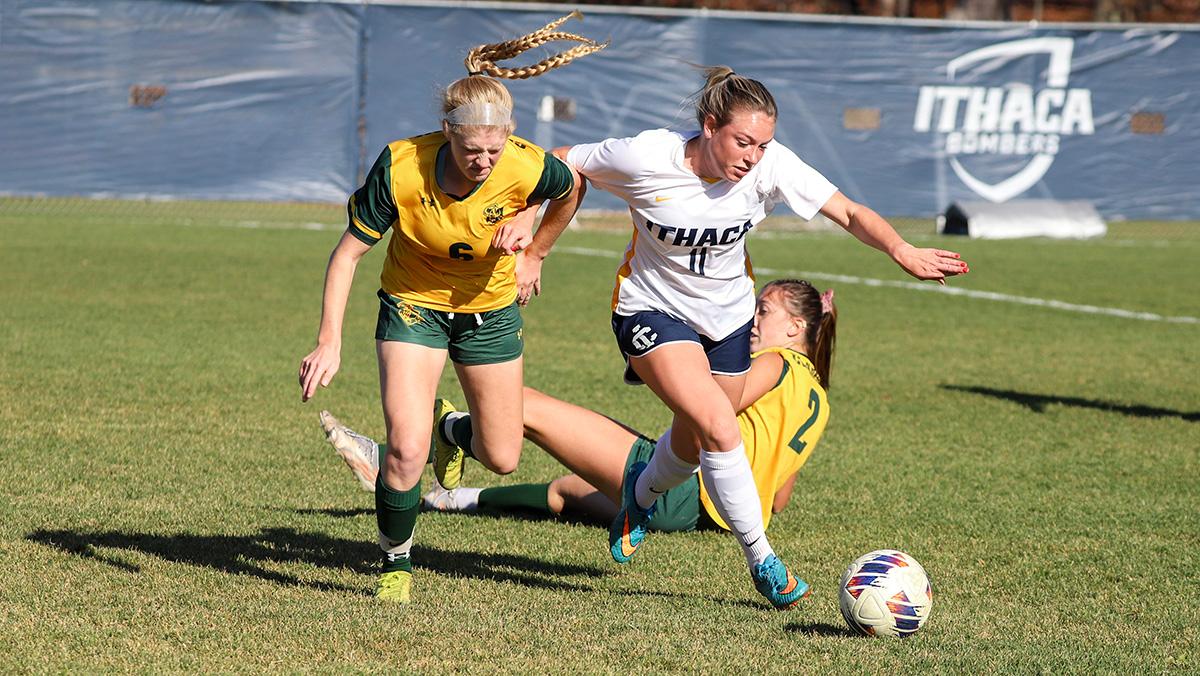 The Ithaca College women’s soccer team advanced to the Liberty League Championship game with a thrilling 1–0 win over Clarkson University. Senior forward Delaney Rutan once again grabbed the game-winner, this time in the first of two overtime periods.

In the 11th minute, a chaotic sequence in the midfield sent Golden Knights attacker Sarah Kohls through on goal with only Bombers junior goalkeeper Claire Reader. Bombers Senior defender Jessica Bredin tracked down the attacker, getting her foot in at the last second to deflect the shot wide.

The Golden Knights continued to pour on pressure in the first 20 minutes, earning five corners in the early going. Reader came up with a big hand on a dangerous delivery, pushing the ball out wide.

The Bombers’ first big chance came in the 29th minute. Graduate student midfielder Megan Buttinger sent a great ball out wide to first-year student midfielder Kaelyn Fernandez. Fernandez cut back on her left foot, placing a cross to the back post where junior attacker Ally Stanton was waiting. Golden Knights goalkeeper Molly DiCaprio reacted quickly to close the space and make a save.

In the 32nd minute, Stanton had another great opportunity from a corner. Her powerful header was blocked off the goal line by a Golden Knights defender, creating a scramble right in front of goal. The Bombers had another shot blocked before the Golden Knights cleared its lines.

Just at the end of the first half, first-year student Ali Amari made a great run down the wing, dribbling past two defenders into the box. She played a great, low ball across the goal, but a Golden Knights defender cleared the opportunity, concluding an entertaining first half.

The Bombers opened the second with pressure on the attack, but no obvious chances materialized. A great ball on a free kick from 35 yards out by Buttinger curled just around the back post with nobody getting a final touch.

In the 55th minute, Buttinger delivered another great ball from a corner to senior attacker Rosie Bostian whose headed shot was simultaneously blocked by the goalkeeper. The pressure continued with senior forward Delaney Rutan in the 57th minute, placing a shot just over the crossbar.

With just five minutes left in regulation, Buttinger went on a tear through the midfield, dribbling through a group of defenders. Just outside the box, she pinged a shot that smashed the far post, rebounding to Stanton whose second effort went wide of the net.

Bostian took a free kick in the final minute of the game, but DiCaprio made a comfortable save, sending the game into overtime.

The Bombers big moment came in the first overtime period in the 93rd minute. Buttinger delivered a great ball through to Rutan. Rutan won a 50-50 ball against DiCaprio who came out of her box. Rutan lifted the shot over the keeper, trickling into the back of the net for the 1–0 lead.

The Goldens Knights threatened to score right at the end of the first overtime period with a dangerous free kick. Golden Knights junior attacker Arin Bates won the header in the box, sending the shot just wide.

Playing into the wind in the first overtime, head coach Mindy Quigg said the message to the team was to play conservatively in the tough conditions.

“Be smart for 10 minutes, don’t let anybody in behind and run that clock down,” Quigg said. “If we have our isolation, get the ball central, then forward and that’s exactly how we scored.”

“All four of them did such a great job together,” Quigg said. “They knocked the ball around well, they communicated well, and they defended as a unit and really didn’t give up much through the middle.”

The Bombers travel to play William Smith College on Sunday, Nov. 6 for the Liberty League Championship.