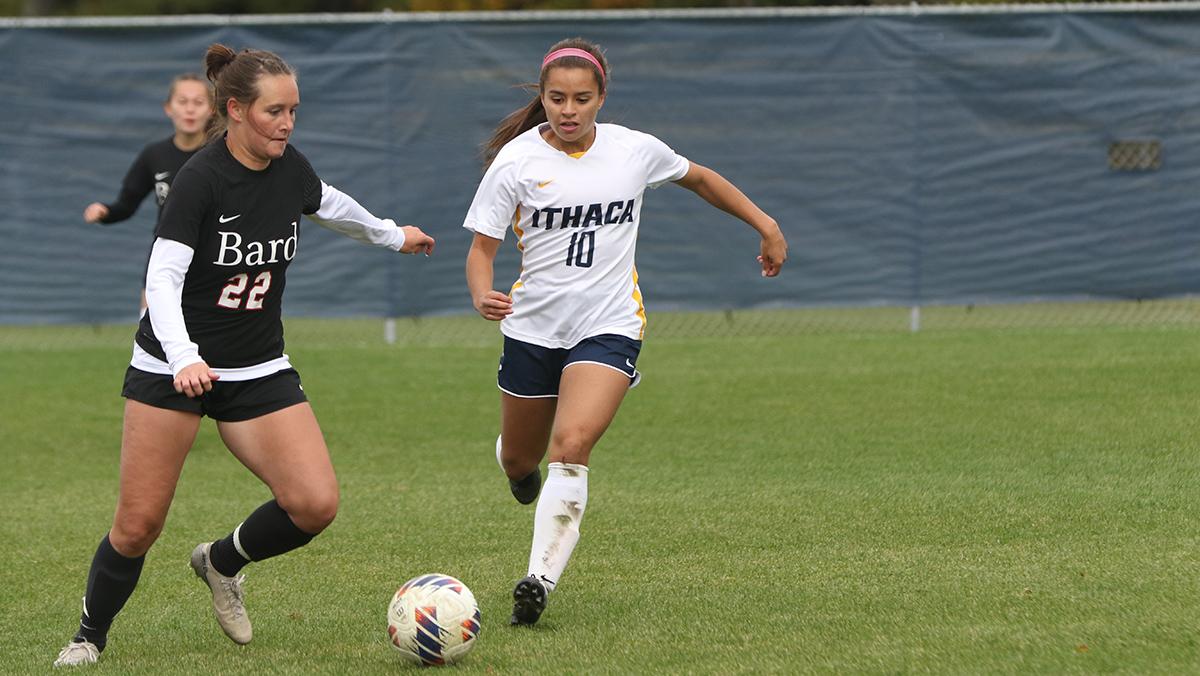 The Ithaca College women’s soccer team celebrated senior day with a 6–0 win against Bard College on Oct. 8 at Carp Wood Field. The Bombers scored in just the third minute of the game and exploded for four goals in the first half, coasting to their third straight victory.

Rutan started the goalscoring for the Bombers in just the third minute for a quick 1–0 lead. Buttinger delivered a perfect cross to the feet of Rutan, who took an excellent touch around the keeper for a tap-in finish.

From there, the Bombers never looked back, striking again in the 11th minute through junior forward Rosie Bostian. Buttinger delivered another great ball from a corner and Bostian rose up over a crowd of players to head the ball in the back of the net.

First-year student forward Kaelyn Fernandez made it three for the Bombers in the 32nd minute. Junior defender Clare Sunderland received the ball at the top of the box, taking a shot and forcing the keeper to make a diving save. The ball deflected out to Fernandez, who had a wide open net to finish.

Just before the half, Krueger gave the Bombers their fourth goal. Sophomore midfielder Carrie Davis won the ball back for the Bombers in an attacking area and played a great ball to the back post where Krueger was waiting to finish.

The Bombers looked comfortable in the second half, knocking the ball around. The Bombers threatened to score but would not get a fifth goal until the 86th minute. First-year student forward Riley Brodrick found herself in a one-on-one with the goalkeeper and calmly finished to score her first career goal.

Just two minutes later, first-year student midfielder Maggie Galewski also scored the first goal of her career to put the Bombers up 6–0. Junior defender Brenna Lorenzen sent a great ball through to Galewski, who lifted the shot over the goalkeeper into the top right corner.

The Bombers earned their third consective win and shutout, moving to 8–2–2 on the season and and 3–1–0 in Liberty League play.

“[The goal] was definitely needed,” Rutan said. “Whenever we put one away in the beginning, it helps us settle down and play our game.”

The Bombers face two strong opponents on the road, traveling to Skidmore College and Union College for the next two games.

“We know that we just need to play our game,” Rutan said. “It is two really tough games, but if we go and play Bomber soccer, we’ll be successful.”

The Bombers kickoff on the road at 4 p.m. Oct. 14 at Skidmore College.