Women’s Soccer: Bombers get back into the win column with win against SUNY-Farmingdale 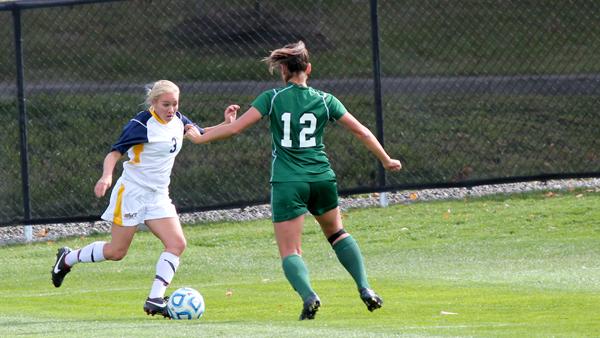 After going two consecutive games without a first-half goal, the women’s soccer team made sure to get on the board early Saturday.

In their 3-0 victory against SUNY-Farmingdale, the Bombers scored all three goals in the first half. In just the sixth minute of the game, junior forward Jackie Rodabaugh took a sharp crossing pass from fellow junior forward Ellyn Grant-Keane and found the back of the net to give the Bombers an early 1-0 lead.

“When that happens, you just see the other team’s heads drop, and it’s mentally very hard for them to come back,” she said. “It’s easier to get that first goal and keep pushing.”

The Bombers were also able to take advantage of set pieces in the first half. In the 12th minute, senior midfielder Julie Winn set up a corner kick and sent a cross right to junior midfielder Amanda Callanan, who deflected the ball into the net for a 2-0 lead. Then in the 44th minute, junior midfielder Meredith Jones added another goal with an assist by sophomore midfielder Jessie Warren.

Farmingdale almost made it a 2-1 game in the 30th minute when senior goaltender Becca Salant deflected a free kick back to freshman midfielder Melissa Lijo, but Lijo’s shot hit the crossbar and bounced out of the goal. The Rams also had a penalty kick in the second half, but Salant made a diving save to her right to preserve the shutout.

Farmingdale Head Coach Chris Roche said they were satisfied to match the Bombers for shots but were not able to convert.

“We got a little unlucky and couldn’t really hit the ball exactly how we wanted to,” Roche said.

“We were able to get a lot done this week,” Quigg said. “It’s that time of the year where you just have to make sure everyone’s healthy and make sure everybody’s warming up properly and doing everything we need to do as a team.”

The Bombers return to action at 7 p.m. Wednesday night, when they travel to Utica College for a showdown with the Pioneers.