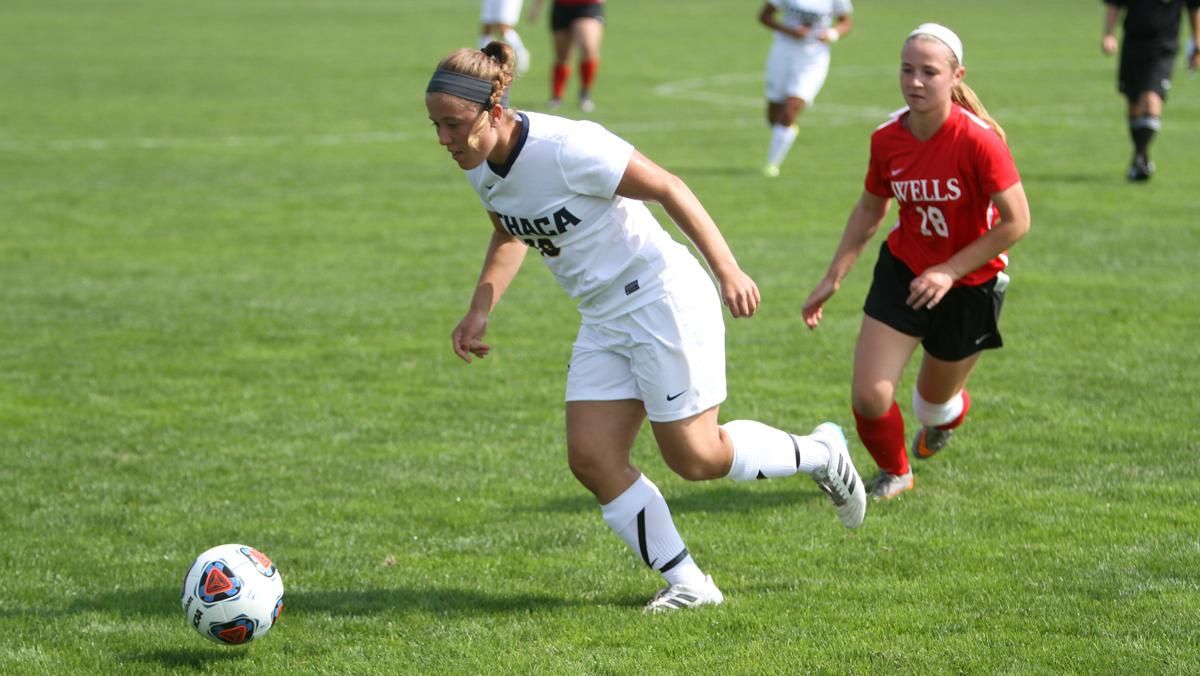 ELIAS OLSEN/THE ITHACAN
Junior forward Sarah Pirnie looks to get the ball before freshman midfielder Alisa Hines of Wells College comes up and gets the ball. The Bombers beat the Express 8–0 at Carp Wood Field.
By Matt Clement — Contributing Writer
Published: September 17, 2017

The women’s soccer team defeated Wells College 8–0 during their first home game of the season on Sept. 16. The Bombers outshot the visiting Express 33–4 and completely dominated possession throughout the game.

Within 19 minutes into the game, junior midfielder Shoshana Bedrosian had scored four goals, but the Blue and Gold’s scoring was far from finished at that point. Within the next 13 minutes they managed to add three more goals scored by freshman midfielder Alex Epifani, junior forward Reid Garner and senior midfielder Mackenzie Hinchliffe, respectively. When the halftime whistle blew, the score was a staggering 7–0.

The second half was not as high scoring as the first, but was highlighted by a goal from freshman forward Maddie Amidon from outside the box to beat the keeper.

When asked about what was working during the game, Bedrosian said that communication was a big part of the final result.

Despite the high score, the game was won in the midfield, with the Wells players unable to pass or dribble through the aggressive Bombers midfielders.

The Wells defense had trouble the whole game as the Blue and Gold bombarded their box with crosses throughout the day. Three of Bedrosian’s four goals came from crosses into the box, in which she was able to get on the end of them.

“We’ve been doing a lot of work with Shosh on some very specific things,” said head coach Mindy Quigg. “She really put all the pressure aside and went in and took care of business. Her first goal was off a header and she’s been working on those individually, but I was impressed with her second goal as it was really about timing and the pace of her run, and she really laid out for that, really exciting.”

Despite the win, junior goalie Stacy Digiorgio stressed that the team must stay focused during the long season.

With this win, the Bombers improve their record to 2–2 and will be going into their first Liberty League game at 3 p.m. Sept. 23 against Clarkson University at Carp Wood Field.