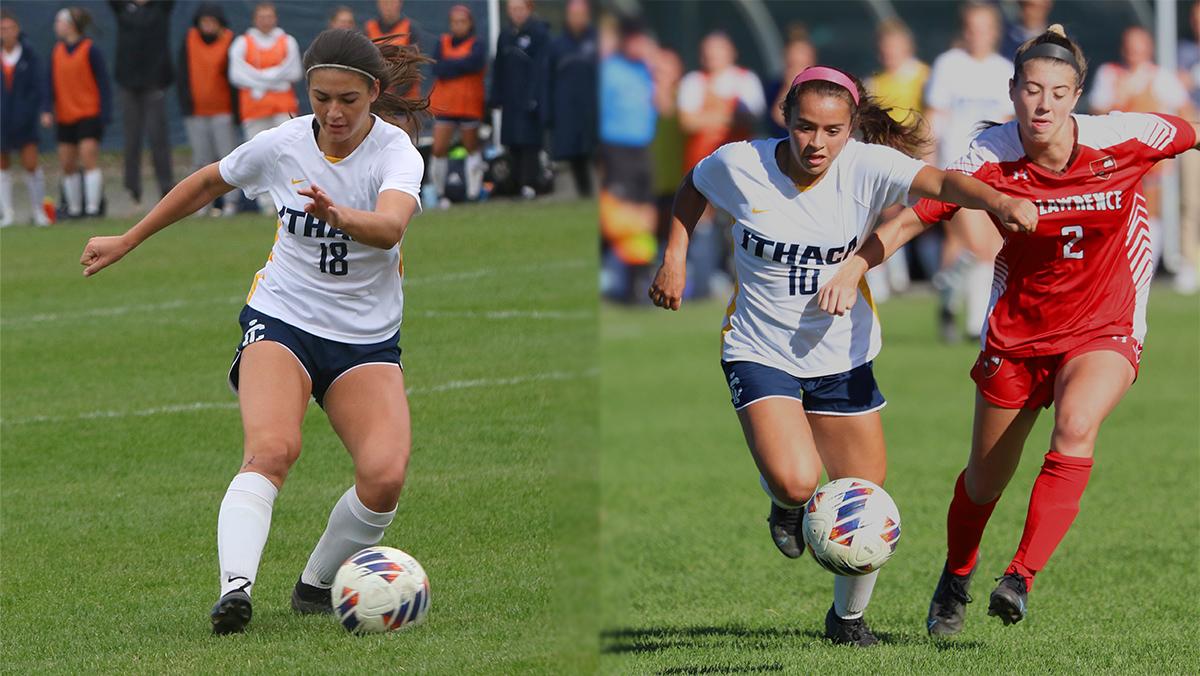 First-year students Ali Amari and Kaelyn Fernandez have made the most of their debut seasons for the Ithaca College women’s soccer team, stepping into big roles as the season began and embodying the important team culture contributing to a successful season.

As roommates and midfielders, the duo are side-by-side on and off the pitch, learning and growing. Both Amari and Fernandez started in the Bombers’ first game of the season, a 3–0 victory over Elmira College on Sept. 1. Fernandez has since started in all but one game, scoring two goals and an assist on the season. Amari has started in 12 of the Bombers 15 contests.

Head coach Mindy Quigg praised Fernandez for reading the game at a high level and being very productive in the midfield for her small size.

“She brings a value of technical ability, tactical awareness and a really incredible pace to the midfield,” Quigg said. “We’re asking a lot of her because we’ve moved her around. She’s played up top, she’s played attacking midfield and she’s played holding midfield, and in the course of one game, she may do all three.”

Prior to her collegiate career, Fernandez said she was accustomed to holding her midfield position. Her role for the Bombers gives her more freedom in her positioning and helps her to see the field better.

“I know what I want when I’m [in attacking positions], so when I’m in the midfield, I have a better perspective of what my teammates want from me,” Fernandez said. “It also gives me more knowledge about the game and how you can play certain ways in different positions.”

Amari has also expanded her game since joining the Bombers, playing as holding midfielder — who stays close to the defensive line and takes primarily defensive responsibilities — behind or next to Fernandez. A natural outside defender, Amari made a transition to a more central position because of team personnel.

“She took it on right away and she gets better every single day,” Quigg said. “She is a really good one-on-one defender, really tenacious on the ball. She’s fearless and likes to challenge people in the air and tackles hard well.”

The transition was challenging for Amari, but she said support from her team made it easier to adapt to a new role.

“In the beginning, I was a little bit lost, but I had great resources around me,” Amari said. “The girls were so supportive and helped me so much on the field and off the field.”

Quigg said she quickly noticed the work ethic and values that Amari and Fernandez brought to the team as the season started.

“They’re very passionate about the sport,” Quigg said. “They listen extremely well and they don’t take offense to criticism; they take it for what it is, which is an opportunity to get better and that’s helping them tremendously grow into the pressures of a program that has high expectations.”

In addition, because they are roommates, Amari said they have been able to forge a close bond, which helps their performances in-game. Off the field, their relationship as teammates has given them something to connect over.

“We have really good communication and can read each other on the field,” Amari said. “It’s so nice to have that support system and to even come back to the dorms and talk about the games.”

The close bond extends to the large first-year student class that has 14 athletes on the roster.

“We’re all in this big adjustment together and it’s been super helpful,” Fernandez said. “I couldn’t ask for a better group of girls to be going through this with, and it makes me really excited for the next four years.”

The first-year student class has performed well on the field, contributing to four goals and seven assists on the season.

“They are all quality players and really good teammates,” Quigg said. “They’re really great women who love the sport and figure out ways, even if they’re not playing in matches, to impact us and make us better every day.”

Fernandez and Amari said they immediately felt like part of the team, and that eased the transition into college life.

“I was a little intimidated coming into my first year of college,” Fernandez said. “All our upperclassmen and coaches made it a really easy adjustment. Through the very beginning, we did everything as a team and they made us feel super comfortable.”

The team is fulfilling Quigg’s expectations of being hardworking, energetic and getting better throughout the season. For Amari and Fernandez, their goal coming into the season was to be positive impacts whether in training, from the bench or on the field.

“I didn’t have any expectation of starting or anything; I wanted to do as much as I could in practice and working hard,” Amari said. “[I was] taking advice from the older girls, seeing how things worked for them and how I could learn from them and just absorb as much as I could.”

As they have solidified their roles in the squad, their expectations for themselves are to show up every day and be ready to make positive impacts each game. They are still learning and adapting each day, understanding the game better as they play higher pressure games in a push for the postseason.

“Something I’ve learned, especially in the tighter games, is that you can’t ever check out mentally,” Amari said. “We need to stay locked in for the entire 90 minutes because something can just change in an instant.”

The Bombers are set to begin the first round of the Liberty League tournament Nov. 1.