Women’s soccer coach cements her mark after win No. 300 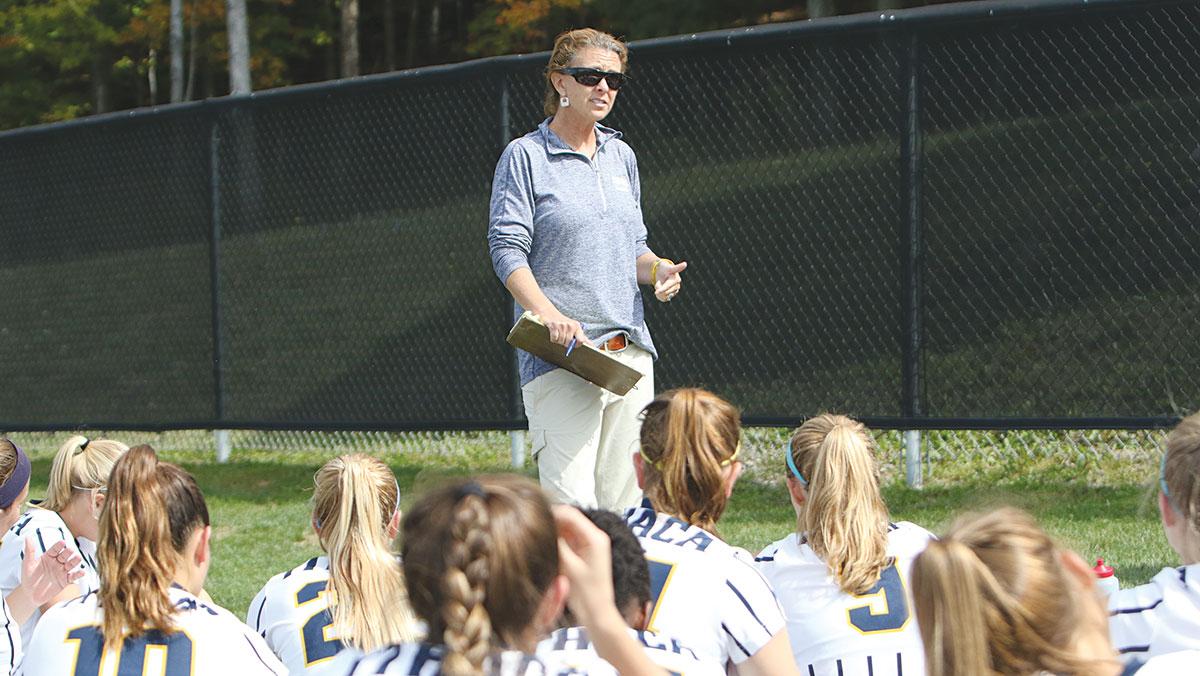 As the clock ticked down to the final second during the women’s soccer team’s 6–0 win Sept. 23 over Alfred University, assistant coach Ellyn Grant-Keane ’14 turned to head coach Mindy Quigg to say congratulations. However, the first thought that crossed Quigg’s mind was ‘Congratulations to you too: We just won.’

Then her team swarmed her, all abuzz with excitement at the feat that their coach had just accomplished — Quigg’s cementing herself in Ithaca College athletics history by obtaining the 300th win of her career.

Quigg, in her 22nd season as head coach of the women’s soccer program, returned to the locker room following the historic win, and when she glanced at her phone, she saw she had received a
massive number of texts from family and former players.

She said the accomplishment was a proud moment for her, seeing her players’ excitement after a tough stretch of games.

“My reaction was just that I was excited just to see my athletes so excited about something. We actually played very well,” Quigg said. “It was nice to play well, and it was nice to see the women genuinely really proud and excited.”

Quigg’s soccer career began when she was a child playing in recreational leagues in New York City. She said she loved to play soccer and carried that passion with her into Washingtonville High School, where she met her first role model, then-head coach Paul Krupa.

From there, Quigg went on to attend William Smith College, where she met her mentor, head coach Aliceann Wilber, who is now in her 36th year with the Herons.

Quigg first met Wilber when she was a senior in high school. At the time, Quigg had actually decided to go to the University at Albany because it was less expensive. She called Wilber to tell her she didn’t want to go to William Smith.

However, Quigg decided she wasn’t challenging herself enough in terms of athletics, so she chose to go to William Smith at the last minute. This was fortunate for both women as Quigg, who played goalie for William Smith, was a huge part of William Smith’s first national-championship team in 1988. Quigg graduated from William Smith in 1989 with the school record of 325 saves.

When talking about Quigg, Wilber had nothing but praise for her former player. She said Quigg has developed and taught great players along the way.

“Mindy was always very invested in her teammates. Similarly, as a coach, she is very invested in her players,” Wilber said. “They know she cares very much about them as people, not just soccer
players. Mindy was and is a great people-person. She has always had great intuition and insight into people, and these qualities are a big piece of her effectiveness as a leader and as a teacher.”

Nowadays, the player has become a coach, and Quigg’s alma mater has become one of her biggest rivals. However, when they play against each other, Wilber said there is no animosity.

“When it is game day and we compete against each other, we each have our game face on, but there is always a mutual respect and connectedness for what we mean to each other,” she said.

Krupa and Wilber still play a large part in Quigg’s life as her role models for coaching. She said she emulates them with both their honest and direct approach to the game as well as a hard work ethic.

A timeline of Mindy Quigg’s coaching career leading up to her 300th win as a Bomber.

For how she lives her life in general, she said she credits her family for the strength that they all taught her.

“I was blessed with the strength of my grandmother, my mother and my sister,” Quigg said. “They’re three of the strongest women I know still to this day. They’re just incredible. The lessons learned from my grandmother about living life with grace and honesty … that was instilled into us.”

“My relationship with [her] over the past four years has developed into a special and respectful bond that is unlike anyone else in my life,” King said. “She cares about her players more than anything. I trust her completely on a day-to-day basis that she is pushing us to improve with every single practice.”

King has been a huge contributor to many of those 300 wins on the field and said the feeling of being on the field when Quigg clinched was fun.

“It was a really exciting feeling to take part in Coach’s 300th win,” King said. “She works so hard every day to ensure we are a successful team, so it kind of felt like we were repaying her for all that. Her accomplishment is a statement for how smart and dedicated of a coach she is, and it felt good to celebrate that.”

King also said having a coach as knowledgeable and as driven as Quigg has created a great environment for the team. Even for newcomers, such as freshman Samantha Robinson, there is a special connection.

She said Quigg is the best coach she’s ever had and was privileged to be a part of Quigg’s accomplishment.

“I signed a banner congratulating her, and that was cool because I know she’ll have that banner forever, and as a freshman, it means a lot to me that my name’s on there,” Robinson said. “I have so much respect for Coach, and her coaching abilities are definitely what made me want to be a Bomber and come to Ithaca College.”

Quigg said the most important part of coaching is the relationships developed with her players.

“I always tell my players the better I get to know you, the better I can coach you because coaching isn’t like a cookie-cutter thing,” she said. “You can’t coach everybody all the same. Different people are motivated differently. I just try to get to know them as best as I can.”

Quigg’s accomplishments extend across many rivalries, as Heidi Woodcock, head coach of SUNY Cortland women’ soccer, said she still has a huge amount of respect for Quigg even though the two schools are rivals.

“I admire Mindy for her coaching resume and what she has accomplished at Ithaca thus far,” she said. “I can imagine she will continue to reach many more milestones before she is done.”

Woodcock also said the games between Ithaca and Cortland are a great test, and as a coach they’re games you look forward to not only for the competition but also the emotional impact.

Quigg is the program’s coach with the most wins all-time, yet she said each game is just a game, and it’s more about the season at hand.

Quigg said she credits some of her success to just being around the other coaches at the college and uses them to bounce ideas off of and learn from.

Now with win 300 in the books, Quigg said while dribbling a ball between her feet, she’s going to keep coaching for as long as possible.

“I figured I’m just going to keep doing it till I’m not having fun anymore,” she said. “I love working with the women. I love the sport. I love the comradery in the athletic department. I love seeing people grow and progress throughout their years. I do. I love it. I have a lot of fun with it.”