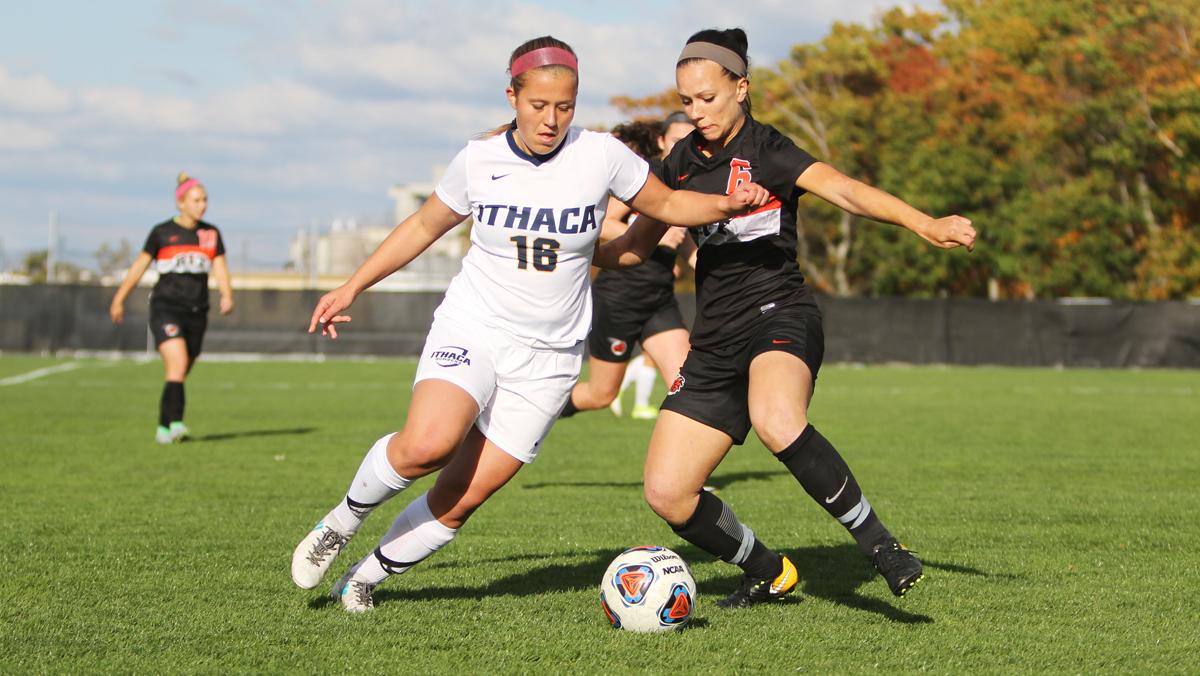 CONNOR LANGE/THE ITHACAN
Junior forward Sarah Pirnie pushes junior defender Riley Yankowich of RIT out of the way from getting to the ball. The Bombers lost to the Tigers 1–0 at Carp Wood Field.
By Sevrin Lavenstein — Staff Writer
Published: October 29, 2017

The Ithaca College women’s soccer team lost a 1–0 heartbreaker to Rochester Institute of Technology in its penultimate regular season game on Oct. 25.

The ball went back and forth across the pitch in the first half as the two teams traded possessions, making it an active day for the midfielders.

RIT’s senior captain, defender and midfielder, Courtney Hunt, had the best chance to score for her team in the first half. With over 30 minutes gone, Hunt sent a shot that came dangerously close to getting by junior goalkeeper Stacey Digiorgio.

Instead, the shot missed just high over the net. With 10 minutes remaining, the Tigers seemed to be playing keepaway, with lots of passing that had the Bombers barely touching the ball to close out the half.

Freshman midfielder and forward Alex Epifani noted that the team was not on the same page in the first half of play.

Head coach Mindy Quigg also said that the first half had some flaws, and sought to correct them in the second.

“At the end of the first half, we started giving up too much on the flank and that’s where they started winning the midfield battle,” Quigg said. “I felt like we needed to make that correction to start the second half and I thought we did a great job with it.”

The second half looked to be as deadlocked as the first, but with 5:10 remaining in the game, junior midfielder Emily Thiel assisted junior forward Monique Polanco off a corner to give the Tigers the only score that iced the match.

“I feel like it was more of a draw than a loss, but the scoreboard doesn’t indicate that,” Quigg said. “I told the women I’m proud of the way we came out today and I’m proud of the adjustments we made at halftime. We had one lapse and they took advantage of it, and that’s disappointing, but we are going to regroup tomorrow and we have another day to wear our Ithaca jerseys.”

The Bombers now turn their attention to Vassar College, who won its game against Rensselaer Polytechnic Institute. The Blue and Gold will play at 2 p.m. Oct. 28 at Carp Wood Field.