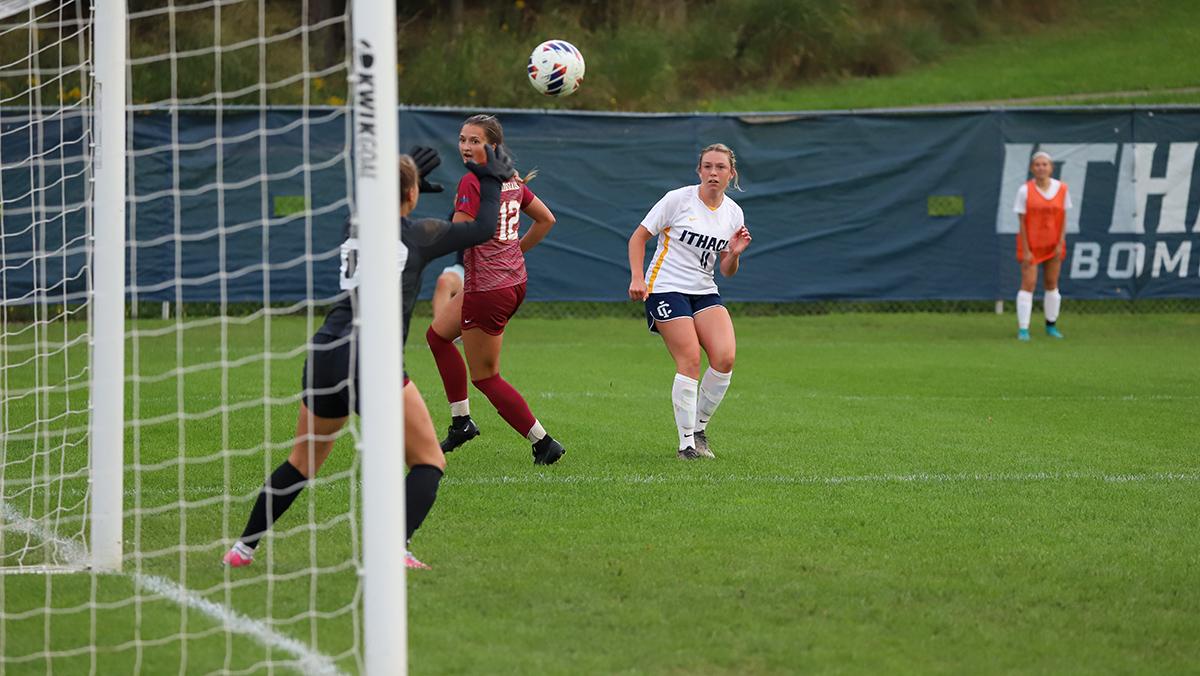 The Ithaca College women’s soccer team got back to winning form with a dominant 5–0 victory over the St. John Fisher University Cardinals on Sept. 20 at Carp Wood Field.

Junior forward Rosie Bostian gave the Bombers an early lead just 10 minutes into the game with a 30-yard strike from outside the box. The ball dipped over the goalkeeper and into the back of the net.

Just two minutes later, the Bombers scored a second goal from senior forward Delaney Rutan. A miscue from the St. John Fisher defender sent the ball back toward the goal, and Rutan found herself in a one-on-one with the goalkeeper. Rutan calmly tucked the ball into the bottom right corner for a 2–0 Bomber lead just 12 minutes into the game.

The Bombers found the net again with just under four minutes left to play in the half. Sophomore midfielder Julia Cascone’s corner kick made its way to junior midfielder/forward Ally Stanton who was left at the back post and forced it in through two defenders for a 3–0 lead.

The Cardinals came out in the second half putting some pressure on the Bombers. After the Cardinals’ best chance of the game, the Bombers broke out on a counterattack. Bostian sent a ball over the top of the defense, sending Rutan through on goal, to give the South Hill Squad a 4–0 lead.

Cascone got on the scoresheet for the Bombers at 82 minutes, putting them ahead 5–0. She made a long dribble into the box and through defenders before tucking the ball into the bottom right corner.

The Bombers closed out the big win after taking two draws and a loss in its previous three matches. Rutan finished the day with two goals, while Cascone and Bostian each had a goal and an assist. Head coach Mindy Quigg said it was a full team win.

“We came out, stuck to our game plan and executed what we’ve been training in practice,” Quigg said. “We bounced back from a hard tie, and I was really proud of the women for that.”

After going 4–1–2 against strong opponents to start the season, the Bombers will begin Liberty League play this weekend. Quigg said the team feels confident going into the heart of the season.

“We are learning a lot about ourselves, and we are young,” Quigg said. “We are feeling confident in our preparation, and we have three days to get better [before the next game].”

The Bombers will open Liberty League play at 2 p.m. Sept. 24 at Clarkson University.