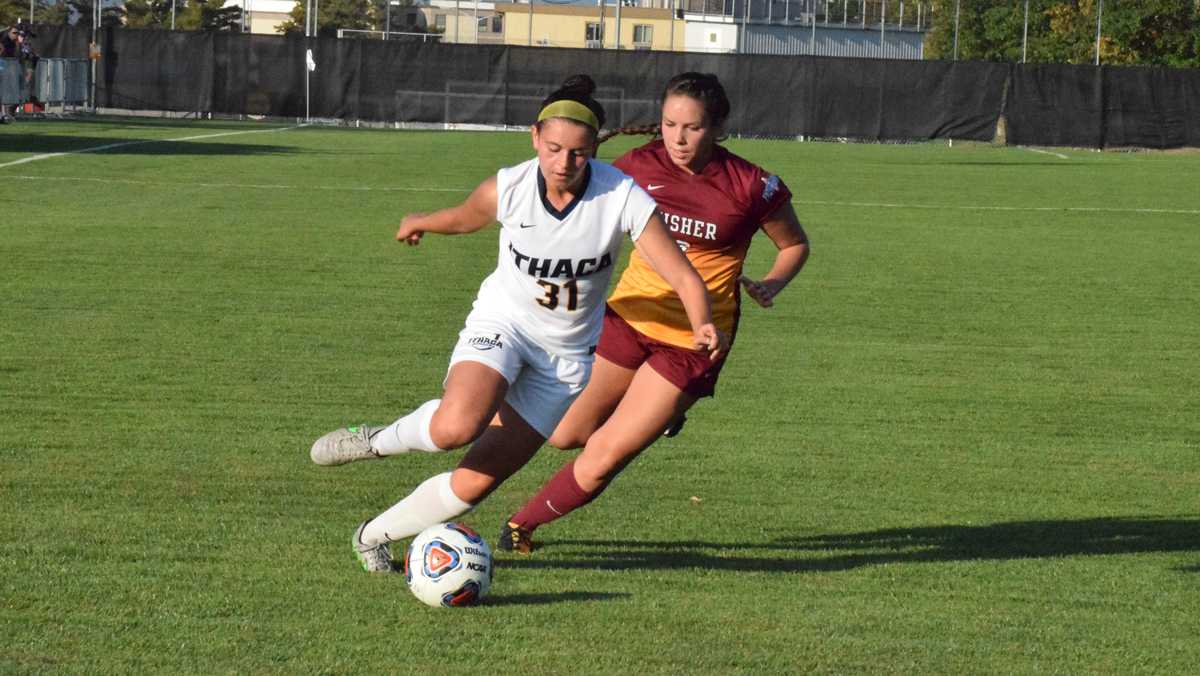 The Ithaca College women’s soccer team powered past St. John Fisher College for with a 4–0 win in their its eighth game of the season on Sept. 27.

The scoring started early when sophomore back McKensie Galusha shot a corner kick that rebounded off of a Cardinal defender and into the net. The Bombers’ first goal came after nine minutes of play.

When time started to run out in the first half, freshman midfielder Kelsey Espenhorst added to the lead with an assist from fellow freshman Alex Epifani. This put the Bombers up 2–0 at halftime.

The Blue and Gold held the Cardinals to one shot on goal in the first half compared to their own seven. Head coach Mindy Quigg was well aware of her players’ good work.

“I think our midfield played a little bit tighter, and our backs played pressed a little bit higher, so we were able to put a little bit more pressure on people which eliminated a lot of their game,” Quigg said.

The second half belonged to Epifani as she had another assisted goal to sophomore forward Ally Christman and then added a breakaway goal of her own late in the game.

“Alex is an extremely hard-working and talented young woman who I think has just scratched the surface of what she’s capable of,” Quigg said. “I think one reason why she was so successful today, more so really in the second half, was because she started playing with her head up. Her vision of the game was much better today.”

Epifani finished with four points on two assists and one goal. After the game, she echoed the sentiments of her coach.

“After I picked my head up and I was looking around, I got my opportunities because in the first half I wasn’t really doing that,” Epifani said. “In practice, I would shoot, and it would go right to the goalie, so I really didn’t have my head on a swivel or keep it up at all.”

While the win feels good, even a freshman like Epifani knows that it’s time to get back to business for the next game.

“It feels good to win so this momentum is definitely going to get better as practices go on,” Epifani said. “I definitely have to look more to my right foot because I was really just focused on my left, and working as a team with our communication and our ones and twos we’ve been doing really well.”

The Bombers will play their next game at 2 p.m. Sept. 30 against St. Lawrence in Canton, New York.