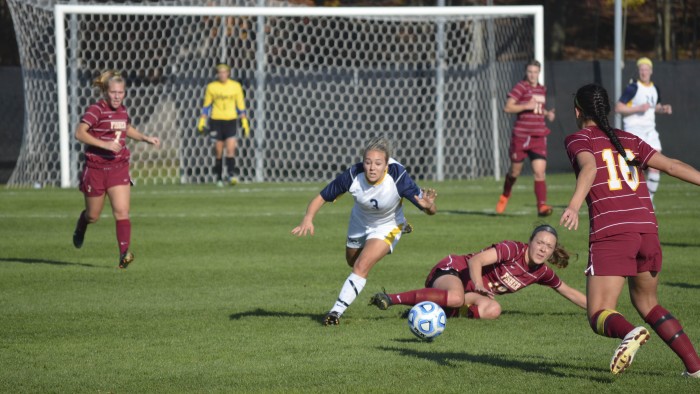 After a dramatic 1–0 upset against the two-time defending national champions, Messiah College, on Nov. 23, the women’s soccer team bowed out to William Smith College in the Elite 8–round of the NCAA tournament on Nov. 24. The Herons scored in the 63rd minute to defeat the Bombers 1–0.

In the Sweet Sixteen game against Messiah, freshman forward Megan Nash took a pass from freshman forward Holly Niemiec and hit the top left corner of the goal for her second goal of the season in sudden death overtime. Sophomore goalkeeper Beth Coppolecchia had seven saves for her 10th solo shutout of the season.

William Smith, which defeated The College of New Jersey 1–0 on Nov. 23, advanced to the Elite 8 to play the Blue and Gold. The fourth-round game was stalemated until the 63rd minute, when junior midfielder Dineo Mmutla netted a goal to give the Herons the lead for good. With the win, William Smith advances to the Final Four round of the tournament on Dec. 6 in San Antonio. William Smith accounted for two of the Blue and Gold’s three losses on the season.

The Empire 8 champion Bombers ended their 2013 season with an overall record of 19–3–0. In the 22 games, the Blue and Gold tied the program record for most wins in a season set by last year’s team. Additionally, Grant-Keane broke the record for most career assists with 30. Sophomore forward Kelsey King led the Bombers with 14 goals on the season, while Grant-Keane and junior midfielder Jessie Warren led the team with five assists each.