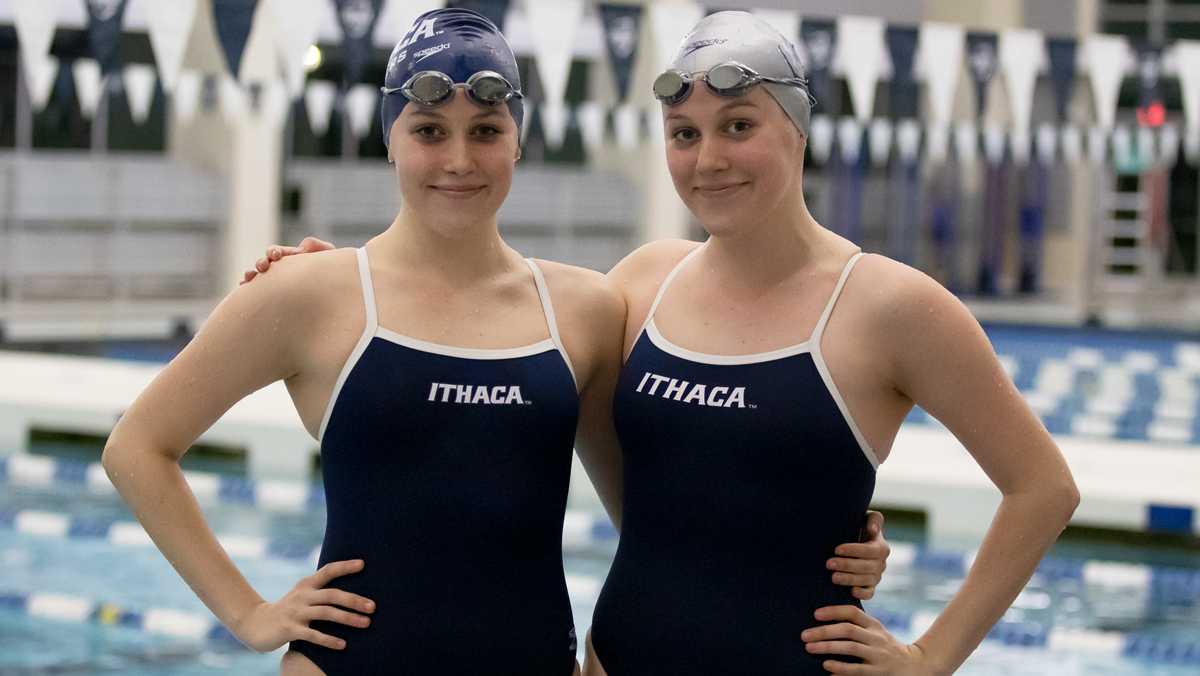 Freshman swimmers Anna and Olivia Rubino have a lot more in common than your typical teammates. The pair are identical twins, and both compete in backstroke events for the women’s swimming and diving team at Ithaca College.

The pair began their swimming careers together at 10 years old. They were four-year varsity lettermen and captains of the Monument Mountain High School girls swimming and diving team their senior year. They also qualified for the 2019 Massachusetts Interscholastic Athletic Association Division I Championships in the 100-yard backstroke, 100-yard freestyle, 200-yard freestyle relay and 400-yard freestyle relay. Both also earned All-Berkshire County honors during all four years of high school.

When they began their college searches, the twins said that they knew they wanted to stay together. Both said they chose the college because of the opportunities in the swim program and their interests in the music program, as Anna plays viola and Olivia plays the violin. Olivia said that while they do not have much time to commit to music right now, they hope to get involved during the spring semester.

“We’ve always been very close to each other, so we knew that we wanted to be together,” Anna said. “Going to the same college was always the plan growing up.”

The sisters said they have always supported each other both in and out of the pool. Olivia said they hold each other accountable to perform their best every practice and meet. When they are swimming in different lanes, Anna said they often compete against each other, even during practices.

“We’re always trying to do our best,” said Anna. “I feel like we feed off of each other’s energy to keep pushing, to keep going.”

Both twins agreed they feel more comfortable going through the challenges of transitioning to college together. Olivia said it has been nice having someone she already knows so well with her on campus.

“We have our other friends, but having Anna here, who I already know really well, is so helpful,” said Olivia.

Despite moving up to the college level with a competitive freshman class and overall team, Anna and Olivia both said they feel as though their experience as teammates has not changed, and Olivia said they are now closer than ever in terms of their relationship in the pool. The pair are competing in both backstroke and freestyle events for the Bombers.

“It’s fun to push and motivate each other with a little sibling rivalry,” Olivia said.

The Rubino twins have been successful in competition for the South Hill squad so far. They teamed up with freshmen Julia Young and Margaret Fox to pick up a second-place finish in the season opener Oct. 19 against SUNY Fredonia, The College at Brockport and Buffalo State in the 200-yard freestyle relay. Olivia also finished sixth in the 50 backstroke, while Anna took fourth in the 50-yard freestyle race and fifth in the 100-yard backstroke. The pair also competed against SUNY Cortland on Nov. 2.

Head coach Paula Miller said she is excited to see the twins compete together as they begin their college careers.

“The Rubino twins are amazing,” Miller said. “We are excited about their potential, see what they are bringing to the table.”

Having identical twins on the team has been a new experience for the South Hill squad. Senior captain Alexandra Estanislau said that it was hard at first to figure out who was who, but they have already created their own identities.

“Throughout a practice, you see them come together once in a while to chat or give words of encouragement,” Estanislau said. “You can tell they are sisters, but they are not attached at the hip. They have made a name for themselves on our team as individuals more than as ‘the twins.’”

Estanislau said the twins are very composed at practices and meets and do not seem stressed or phased by hard sets.

“They are soft-spoken, but boy, do they swim fast,” she said. “We need more people like that, that aren’t afraid to go after it regardless of how much it might hurt or challenge us.”

Both Anna and Olivia are currently in the exploratory program at Ithaca College. However, they do differ in their career goals. Anna said she is interested in health sciences, while Olivia enjoys writing.