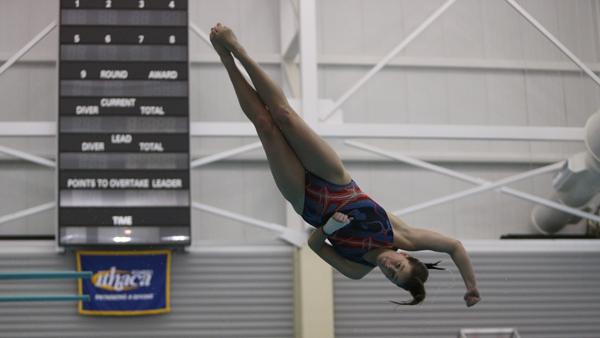 The Ithaca College women’s swimming and diving team has just one meet left to tune up for the New York state championships. With a win in the state meet, the senior class of 2013 would make Bomber history.

The senior class entered the college as one of the largest ever recruited, with 15 swimmers and divers, though that number has been whittled down to 11. The Blue and Gold have a chance to win four state championships in four years — something that no other team at the college has ever done.

This far into the senior class’ career, they have lost only once, to Bloomsburg College their freshman year, and tied once against University of Rochester last year. This season, the team is undefeated at 12-0, tallying wins of at least 50 points in half of their meets.

The seniors have been key to the team’s success throughout their careers. Several members of the senior class even appear in the South Hill squad’s all-time record books. Senior Carly Jones alone shows up there 17 times. Individually, she holds records in the 200-yard individual medley and the 400-yard individual medley, while senior Madi Sherri holds the top marks in 100-yard breaststroke, the 400-yard medley relay and the 200-yard medley relay.

Jones said she did not want to place too much emphasis on the career accomplishments of the senior class. She said the team wants to continue taking the season one meet at a time but also recognizes the magnitude of the accomplishment.

“I hadn’t thought of it before, but I don’t want to put too much pressure on getting all four championships in four years, but it’s definitely something to keep in mind,” Jones said.

The team attributes its success to the love they have for each other, the program and the sport.

“The seniors care so much about the team,” senior diver Kloe Boeckel said. “We believe in each other and our team’s success because we know how hard the team works because we know we are going to do well.”

Junior diver Korie Fackler said she wants to work hard to make sure the senior class can achieve this new milestone. She said she would be happy if the seniors were able to go out with another win.

“I would be so sad, for them and myself, if we didn’t win this year,” Fackler said. “It would a great way for them to go out, and it would round out their experience. For me being a part of it, I want to make sure they are completely satisfied with what they did. We do it because we love it, and we did something that made us feel good.”

She also said winning this year would set a precedent that future classes could follow to help move the program forward. Jones said she realizes the senior class’ time is coming to an end and that it has an opportunity to leave a lasting impression on swimmers and divers to come.

“I want to leave a legacy,” Jones said. “To know we left an impact on the program as whole will be really nice.”