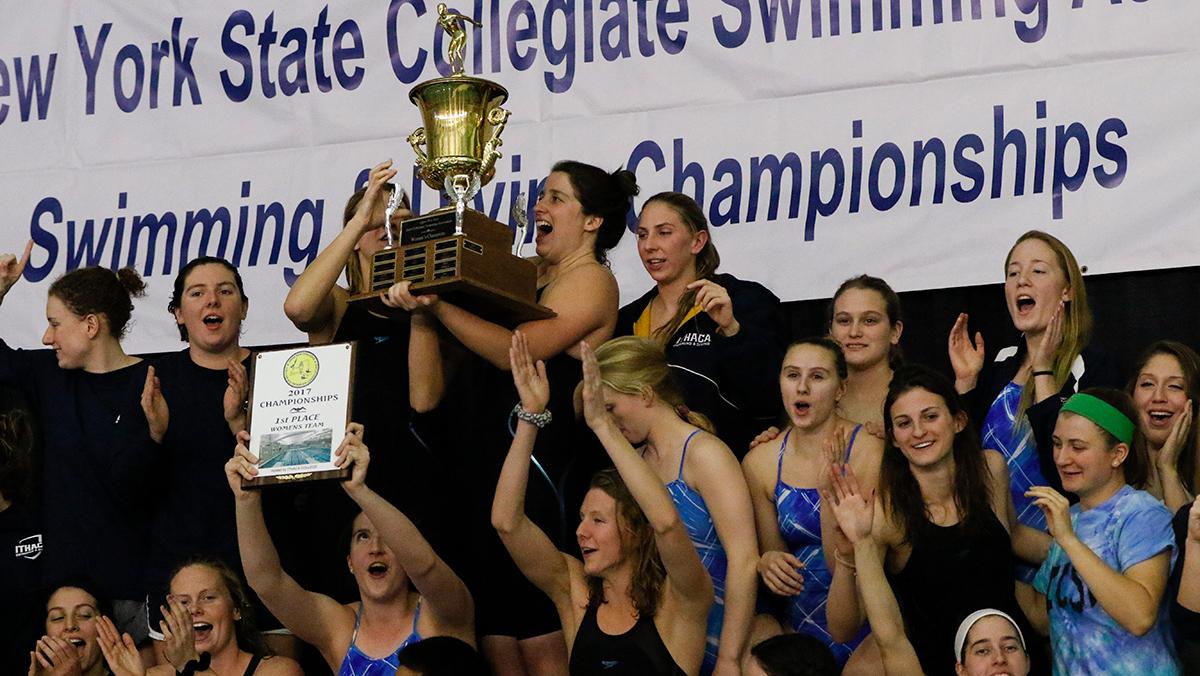 For the fourth straight year, the Ithaca College women’s swimming and diving team emerged victorious at the UNYSCSA Championships on Feb. 15–18 in the Aquatics and Events Center.

The men’s swimming and diving team placed third overall with a total of 995 points.

Senior Samantha Reilly said the team was confident going into this championship.

“We were ready to put all of our hard work behind us and let our bodies do what we know how to do,” Reilly said.

On Feb. 18, senior Lake Duffy gained her second individual title of the week in the 100-yard freestyle race. The Bombers also placed first in the relay event. Senior Brenna Dowd finished third in the mile swim with a time of 17:45.16 after qualifying with a fourth-best seed time. Senior Cat Tompkins finished tenth in the mile, senior Miranda Wingfield finished twelfth and sophomore Hannah Parbst finished thirteenth.

The relay team of senior Erin Hackett, sophomore Jaclyn Pecze, Ayer and Duffy finished the 400-yard freestyle relay race with a time of 3:29.49 to place first in the A-Final and set a new school record.

“We’ve never placed first through fourth in Ithaca history and that was kind of our goal and it kind of puts us in a good spot next week for regionals,” Helley said.

Sophomore Jake Hewitt made it onto the podium with a seventh-place finish in the mile swim with a time of 16:36.58, while freshman Pat Daly finished fifteenth with a time of 17:09.46 and freshman Liam Maginnis finished 22nd with a time of 17:51.36. Hewitt also took the UNYSCSA title in the 200-yard butterfly for the second straight year.

While the coaches did get recognition, they were focused on the athletes, Griffin said.

“They’ve worked hard all season, we’ve done the work and now is the time to just let their bodies do what they know how to do and let the work pay off,” said Griffin. “Everyone is doing amazing, but we’ve got regionals for diving next week and nationals coming up so we’re not done yet.”

The Bombers will be competing at the NCAA regionals on Feb. 24 and 25 in the Athletics and Events Center.