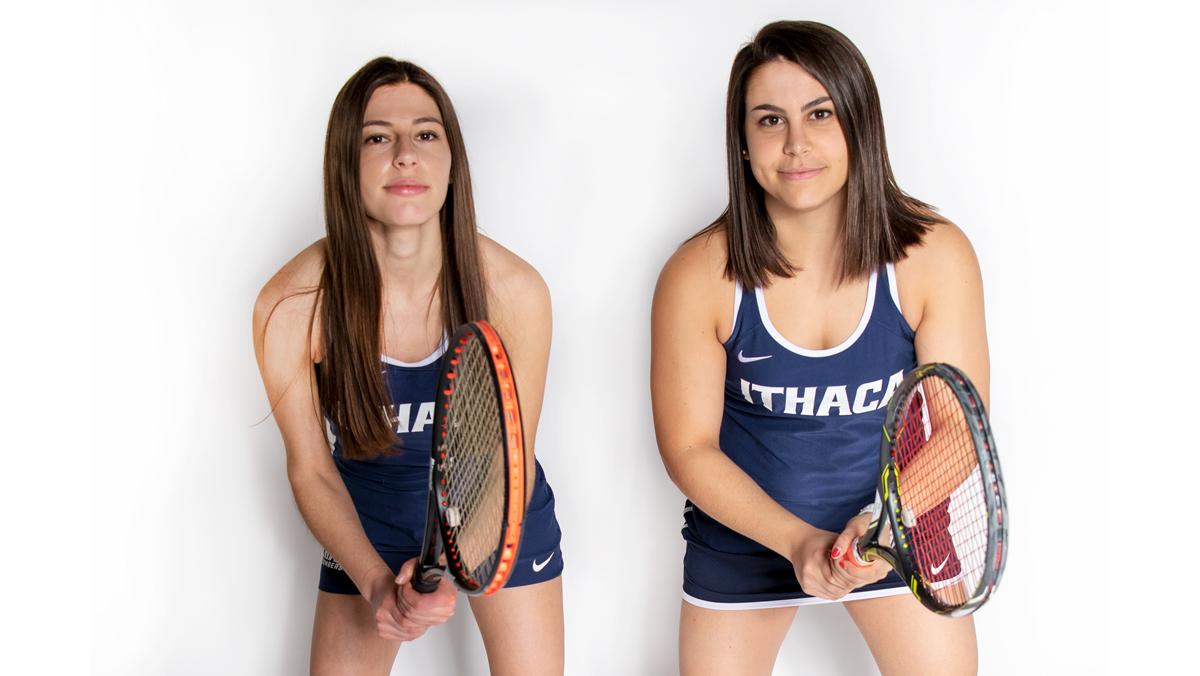 The Ithaca College women’s tennis team is putting the past two seasons behind it as members look to challenge for the team’s first league title since they entered the Liberty League Conference in the 2018 season.

Focusing on the future will be important for the team this upcoming season as it looks to improve upon a 3–14 overall record from the 2019 season. The Bombers will also need to develop a large freshman class. The class has catapulted the team from having barely enough players to field a team to now having the largest roster in the Liberty League. Senior captain Brianna Ruback said that the freshman class, which consists of six players, has really embraced the lifestyle of collegiate tennis players.

“The freshmen have all been good additions to the team,” Ruback said. “They are very enthusiastic about practice, going to lift and conditioning. There’s an overall strong interest in improving.”

Ruback said that having more players on the team helps them have more diversity during practice, as they have many more playing styles that they could potentially face in competition every day. She said this helps them prepare for the other teams in their league.

Ruback will be a key returner for the Bombers, as she has served as the top singles player since her freshman year and has earned First Team All-Liberty League Singles honors for the past two seasons. The team is also returning graduate student and captain Jane Alkhazov, who has missed time during the past two seasons due to injury. Alkhazov said her biggest goal for the season is to stay healthy.

“I am really hoping not to injure myself anymore,” Alkhazov said. “I have had so many different injuries, so I need to make sure I am staying healthy and am a present teammate. I want to be there for every lift, every match and everything in general. I need to be there and be my true self.”

Head coach Bill Austin said that he is pleased with how the team has progressed during the offseason and foresees success for several of his athletes.

“Everybody is working hard,” Austin said. “Anyone who is having a stellar year in their first year is going to have a breakout type of year. … A breakout year implies to me overall improvement in confidence, poise on the core and core strength, and it all melts together. I’m hoping for a breakout year from the whole team.”

The team will start its season against the University of Rochester on Feb. 22. The following week, they will open up the Liberty League and play against Rochester Institute of Technology in Glazer Arena. The Bombers will then head to Orlando, Florida, to compete against Immaculata University, Dickinson College and Bentley University. Bentley University will specifically be a challenge because they are classified as a Division II program while the Bombers are a Division III program. Alkhazov said the trip will serve as a highlight for the team.

“The Florida trip is one of my favorite parts of the tennis season,” Alkhazov said. “You get really close traveling with people, and we are all in a house together and make meals together. We make it a point to watch the season finale of ‘The Bachelor’ because it always occurs in the same week. We also hang out with the men’s team, swim and, obviously, play tennis. It is a really great time.”

After returning to South Hill, the Bombers will fully get in gear with the season and have some highlight matches, including one against Union College on April 18 at the Ben Wheeler Tennis Courts. The Bombers have narrowly defeated Union the past two years. Another highlight will be against William Smith College on March 31 in Geneva, New York. The Herons defeated the Bombers in the Liberty League tournament last year.

Ruback said the team will find success if they can continue to get along very well.

“I’m really excited about this season and am hoping to continue boosting morale and maintaining the camaraderie that we built during the fall tournament season,” Ruback said. “We are just looking to grow all together as a team.

Freshman Sara Steinberg said she believes this season will be an opportunity for the team to gain respect on campus.

“We’re the underdog,” Steinberg said. “Everyone is not aware of the tennis team, and they do not associate us well with the other varsity athletes for some unknown reason. People should really look at us as the underdog, especially this year, and then we can keep building.”