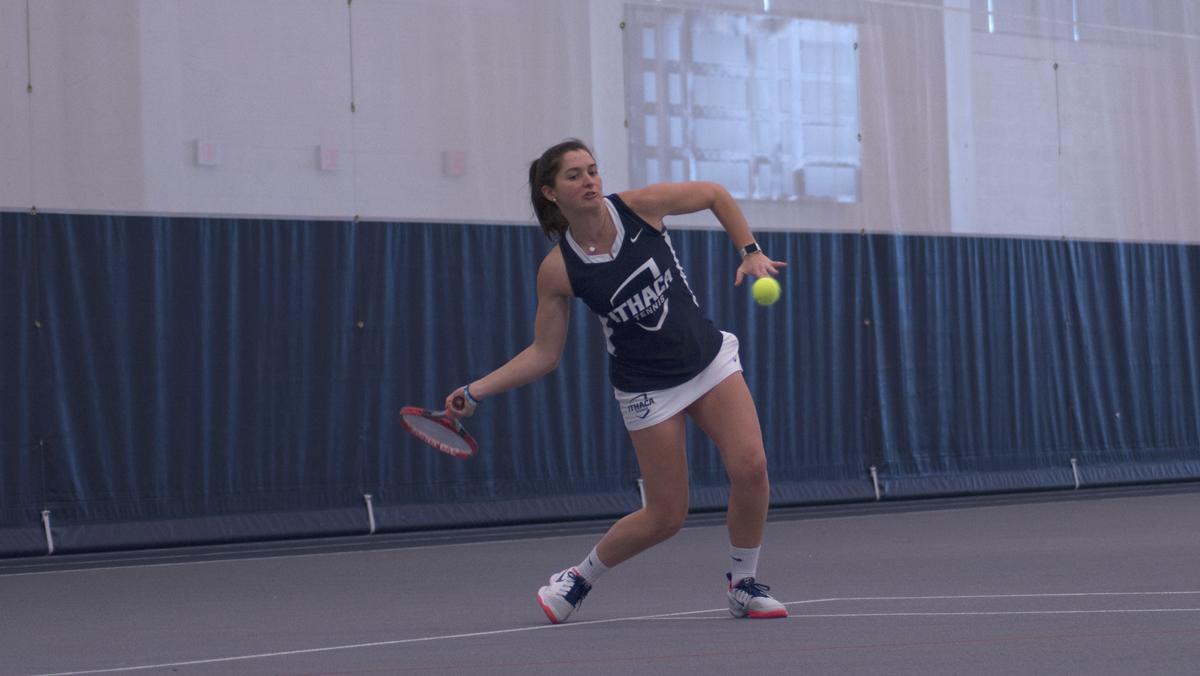 RAY VOLKIN/THE ITHACAN
Junior Caroline Dunn looks to hit the ball back during the match against Skidmore College on March 25 at the Athletics and Events Center. The Bombers only have eight players on the women’s tennis team this season.
By Jack Murray — Staff Writer
Published: March 28, 2018

While many Liberty League Conference women’s tennis teams are carrying 10 to 12 players this spring, the Bombers have only eight on the roster.

In collegiate tennis, a team only has six players participate in matches, as every player plays one doubles match and one singles match. However, seven of the nine other teams in the Liberty League carry more players than the Blue and Gold, with some having up to 14 rostered players. The Bombers, on the other hand, are barely above the minimum and have little room for error with injuries. While the small roster can seem like a disadvantage, Bill Austin, head coach for the men’s and women’s tennis teams, said he is pleased with his team’s effort.

Austin said that every year, the team tries to recruit as many players as possible. During the 2015–16 season, the team carried 14 players on the roster. For the past two seasons, the Bombers have only had eight players.

“We try to recruit as many players as we can every year, and some years, it just doesn’t happen,” Austin said. “We will recruit hard for next year, and hopefully we have a bigger roster.”

The Blue and Gold are not the only team with a small roster. The University of Rochester, to which the South Hill squad lost this year by a score of 7–2, carries seven players. Still, a small roster can present issues that do not affect big-rostered teams. Sophomore Jane Alkhazov said that injuries are a large concern resulting from the constant upper body strains tennis brings.

“Our challenge is that nobody can get injured,” Alkhazov said. “This is especially difficult in tennis because it is an overhead sport, so overuse injuries are common.”

Alkhazov said she is familiar with injuries. Her season was ended prematurely through a torn labrum, which happened as a result of two matches against the University of Rochester on Feb. 18. Her injury brought the eligible players for the Bombers down to seven.

Losing Alkhazov means there is even less room for injuries. Junior Kathryn Shaffer said she is disappointed with the situation and believes that it will stay in the back of the team’s minds.

“We have proved to be a very injury-prone team,” Shaffer said. “It seems like every day at practice, someone is battling a chronic injury. The hardest part is making sure that everybody is taking care of themselves while getting valuable practice time in so that we are ready for matches.”

“The biggest thing is interest in the school,” Austin said. “Internationally, there are a lot of looks for athletic scholarships, which Division III does not offer. Scholarships for women in tennis are a little more prevalent than for men. We have recruited international players for both the men and the women — it just so happens that a lot of the women go to play Division I.”

The lack of athletes means new players are thrown into starting positions. The Bombers have three new players this year: senior Samantha Brown, sophomore Parley Hannon and freshman Sara Steinberg. Steinberg was a typical recruit, and Brown has been with the team the entire year, but Hannon just recently joined the team and has limited tennis experience.

Even though the new players are competing well in their roles, the challenge of throwing in players who are inexperienced at the collegiate level in every match can prove to be difficult. Hannon said she believes her value isn’t just related to court results but also to helping the team grow together.

“I hope to help create a stronger and more cohesive bond amongst us girls and bring positivity and enthusiasm to the courts,” Hannon said. “Regardless of the end results of each match, we walk off the courts with our heads high and are ready for what’s next.”

While its numbers may be low, the team doesn’t let this affect its morale and still believes that they can win every day. Austin said he really enjoys how close the team has become and is excited to see how they will fare.

“There is an opportunity with a smaller squad to work with them more closely and more intensely,” Austin said. “They are responding well, and I couldn’t be more proud of how they are approaching each and every game and practice.”