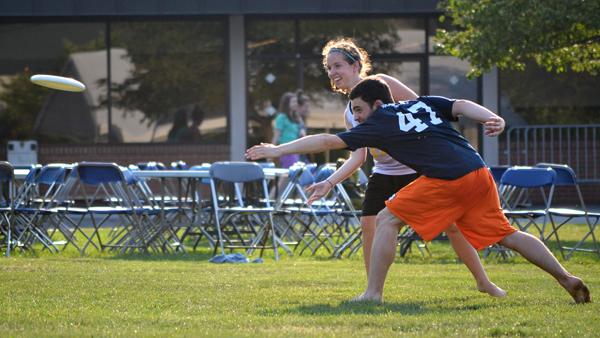 With a snap of the wrist, a plastic neon disc soars from one end of the Fitness Center quad to the other. Athletes drenched in sweat eagerly give chase, while people in bare feet and backwards hats lounge and joke around on the sidelines. However, this is not just a casual game of Frisbee in the backyard — this is women’s Ultimate Frisbee.

“It’s a combination of football and soccer, running and sprinting and hand-eye coordination,” junior and team captain Lena ‘Slips’ Kuchera said. “If you’re not having fun playing Ultimate, you’re doing it wrong.”

There are no referees or coaches in Ultimate Frisbee, which makes the game about honesty. The spirit of the game is more important than rules and regulations. Men’s Ultimate became a professional sport in April with the creation of the American Ultimate Disc League.

“People will be surprised how cool it can be,” Bambrick said. “A lot of people think it’s kind of something you just do on the quad when it’s nice out, but it’s actually a sport we play and practice for most days of the week. I think it’s pretty intense and really cool to watch.”

Coming off an unprecedented spring season, Kweezy is looking to amp up its recruitment this semester. Last spring the team made it to the USA Ultimate Division I Regional Championships for the first time and placed second in the conference. However, Kweezy graduated six seniors and a graduate student in May. On top of that, two players, including one of the team’s captains, junior Katie ‘L-Town’ Talay, are abroad for the semester.

The team is looking to add four to five players this fall, but would like to add 10 to supplement its bench. Kweezy usually practices five days a week on adjacent fields with Nawshus. Kuchera said her team may need to lean on the senior Nawshus members to help her teach the young players the basics of the game with so many of Kweezy’s seniors gone.

At the start of the semester, Kweezy has only seven players who are upperclassmen. With its current roster, the team would be playing ‘savage’ in its games, which means it wouldn’t have enough players on the sidelines to make substitutions. This would prove difficult for the players, especially because Ultimate players usually make substitutions after every two points.

“It’s an hour and a half of running, seven games in a weekend — it’s pretty tough on the body,” Kuchera said.

Junior Alex ‘The Incredible Halk’ Halky joined the team as a freshman and said the aspect that sets Ultimate apart is the community surrounding it.

Halky said the college’s Ultimate teams are a great place for incoming freshmen to establish themselves.

“It’s a club that helps find people a home here and will definitely adjust you more to college life,” Halky said. “There was a time that I thought I was going to transfer, and Kweezy helped me decide to stay at Ithaca.”

Kweezy will be holding its informational meeting at 7:30 p.m. Thursday in Textor 103. The team will also have a table set up at the Organization Fair from 10 a.m. to 3 p.m. Wednesday in Emerson Suites.

While Kweezy’s senior members are looking for new players to ease the physical toll on the field, Halky said she hopes to see them benefit from the Ultimate Frisbee experience more than anything else.

“We are very excited as a team to get new players and have people get to enjoy what we have the past few years,” Halky said.