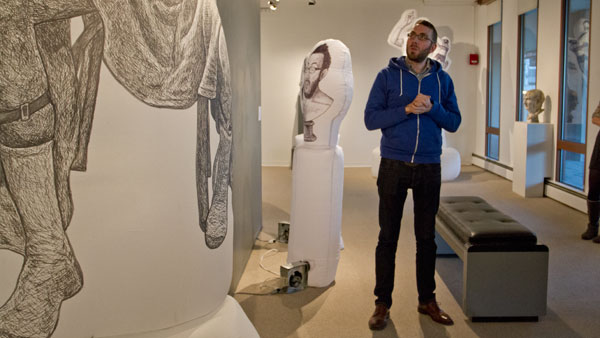 Courtesy of Erica Moriarty
Artist Benjamin Entner stands by pieces in “Sumus: Figurative Sculpture Through the Ages,” during the exhibit’s opening Nov. 14 in the Handwerker Gallery.
By Steven Pirani — Staff Writer
Published: December 4, 2013

Stone-faced and unsmiling, Pharaoh Amenemhat III gazes outward into the space of the Handwerker Gallery and directly into the eyes of a middle-aged woman drawn on canvas. Through the frames of her glasses, she gazes back, locked in a staring contest with a 4,000-year-old piece of Egyptian royalty. This old-meets-new experience isn’t the result of a rip in time, it’s the work of artist Benjamin Entner, whose exhibition “Sumus: Figurative Sculpture Through the Ages” is featured in the Handwerker Gallery through Dec. 15.

The inspiration for “Sumus” came to Entner’s mind while abroad in Florence, Italy. The sculptor, struck with a bout of artist’s block, found inspiration for the exhibit in local sculptures around Florence. He said the classical renderings of naked men spurred the creative vision that would inspire his collection.

This injection of the modern human into the classical realm is a theme that carries throughout “Sumus.” Entner, utilizing his knowledge of classical sculpture and the Handwerker’s collection of classic casts, provides artistic juxtaposition as he crafts each piece’s contemporary equivalent: slabs of marble have been replaced by balloons of canvas, which Entner draws on and then inflates, bringing his illustrations into the realm of sculpture. In addition to these pieces, some works have been taken out of their 3D field and re-imagined by the artist in illustration.

With the artistry of Italy fresh in his mind, Entner’ crafted his first work, an inflatable, 42-foot-tall adaptation of the Colossus of Constantine. The original Colossus depicted the Roman emperor Constantine the Great, and it was erected between 312–15 A.D. in the Basilica of Maxentius in Rome. It stood at roughly 40 feet tall before its destruction. Truly ardent to “fit right in,” Entner has used himself as the model for his own Colossus.

Despite their differences in execution, these contemporary recreations keep the name of each classic piece they are based upon. Entner said while he is celebrating the art, he set out with the objective of parodying the pieces.

“I’m definitely celebrating [classic sculpture] and trying to contemporize it,” Entner said. “All of the pieces are a parody of a classical sculpture.”

In this spirit, Entner has woven humor throughout the collection.

One of the exhibit’s best examples of this is the recreation of the classical Greek piece, “Discobolus.” Originally a bronze sculpture, “Discobolus” depicts a nude male figure in the midst of throwing a disc. It’s an image of athleticism and the masculine figure, but Entner turns it on its head by ditching sculpture for illustration and swapping out the original subject for an elderly one. This “Discobolus” is clad in a checkered shirt, painfully hunched and seems comically out of place.

Senior Dan Caplan said he found humor in Entner’s new rendering of “Discobolus,” especially in how different the two subjects are.

Entner’s pursuit of comedy does not stop with the creation of art. He has taken a similar degree of care crafting each of the placards that accompany the pieces. While the original pieces are paired with factual information, the re-imagined versions blur the lines of fact and fiction.

A notable example of this is the placard for Entner’s recreation of Roman sculpture “Apoxyomenos,” more frequently recognized as the image of a man covered with a fig leaf. While the placard mentions the very real attempts of the church to censor classical art exposing genetalia, it also lies, saying that the Neapolitans used thin-crust pizza to cover up their models. Viewers may find themselves scratching their heads as they read Entner’s descriptions, which is exactly how Entner said he wants it.

“I include factual information, and I also include really absurd information,” he said. “I like that idea that somebody might be reading through it, and it seems real, and then all of sudden they’re like, ‘What?’”

Dara Engler, assistant professor of art, took her figure drawing class to view “Sumus.” She appreciated the comic nature in Entner’s work and said she felt it respectfully pokes fun at classic sculpture.

“I don’t think it’s a criticism, I think it’s a comical appreciation,” Engler said. “I can’t think of a better word; I keep saying it’s a mocking dialogue, except mocking in a very respectful, not disrespectful, way.”

Along with this friendly mocking, Entner said he also aimed to ask questions about the art on display. He said he enjoys the idea of making his audience rethink concepts of beauty and perfection.

“‘Discobolus’ … art historians say that’s from the high classical Greek period,” Entner said. “So it’s the proper proportion, this is the ideal man, and I like that idea of, ‘Well, here’s this old man,’” Entner said. “You can kind of question, what is beautiful? What is the perfect body? And how is that defined? Not only is it celebrating the things in the past, but it also challenges it.”

With how new some of the pieces are, Entner is still figuring out exactly what he wants his audience to take away from “Sumus.” He said he ultimately hopes for laughter but doesn’t want it to come easily. Entner said before a viewer cracks up, he wants them to give “Sumus” some thought.

“A lot of this work is brand new. It’s fresh to me, and I don’t know what I want from my audience,” Entner said. “I want them to laugh, but I don’t want it to be an easy joke. I want them to have to think about it.”