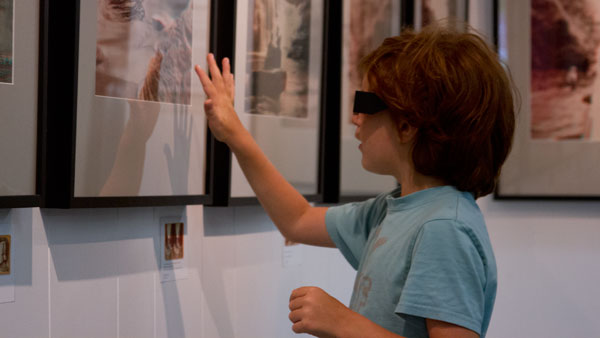 It’s fairly easy to walk past the dozen photographs hanging on the wall next to the entrance of FOUND, a small antique store located behind Wegmans in Ithaca. Amid the glittering, old jewelry and charmingly aged furniture, the photographs on the wall come to life with 3D glasses.

The Gallery at FOUND on Cherry Street is showcasing the collection “Water Views: Historical Images of Ithaca in 3D,” a show created by husband and wife team Randi Millman-Brown, visual resources curator at Ithaca College, and Keith Millman, associate professor of new media at Tompkins Cortland Community College. The gallery will run Sept. 4–29.

Each image was created from stereographs taken of Taughannock Falls, Buttermilk Falls and other natural waterfalls in the area. Stereographs are composed of two separate images placed on the left and the right that, when viewed through a stereoscope, make a three-dimensional image.

Unlike other photography shows, however, “Water Views” combines history and modernity in the presentation of the images. Millman-Brown obtained the images from the History Center of Ithaca. When viewed with 3D glasses, the images of people and places from the 1800s become three-dimensional, popping off the prints.

“FOUND is an antique shop, and we wanted the show to be something that you could purchase in there — old stereographs, old photographs,” Millman-Brown said.

Despite being married for 25 years, Millman-Brown said this is the first show she and Millman collaborated on as visual artists.

The choice of FOUND as their gallery came from personal experience. Millman-Brown knows Bill Hastings ’92, the co-owner of the antique shop and a lecturer in the art department at the college, and is a frequent visitor of FOUND.

“I come here a lot because I like to look at the old photographs and things here,” Millman-Brown said. “I actually found my stereograph viewer here. I kind of wanted to do this to support them.”

Millman-Brown and her husband have had The Gallery reserved for a show for more than a year. The project itself, though, came out of two months of work this summer.

After looking through the collection of historic stereographs, Millman-Brown and her husband narrowed the choices down from 25 to the final 12 images that are used in the show. The History Center scanned the original stereographs, so it had digital files. The couple then converted the photos into black and white using Photoshop. The pictures in the stereograph were set up to overlap one another. After that, the couple had to make one layer cyan and another red. When viewed with the glasses at the show, the image pops into 3D.

Roy McCarthy, an Ithaca resident, antique dealer and photographer, said he was impressed by the concept and execution of the show.

“When I first walked it, I didn’t know what it was,” McCarthy said. “My impression of the show is, ‘I’m jealous of the show, because it’s a great idea.’ What I think is really interesting about the show is that if you’re interested in art and photography … then you start to wonder how the artist accomplished a show like this.”

McCarthy said he walked out of the show wanting to learn how to do the process himself, which is what he liked about it.

Freeville resident Elizabeth Altier, who was there with her sister, Maria, enjoyed the historic aspects of the images.

“I really like that they have the old pictures, and that they’re interactive with the glasses,” Altier said. “It brings it into the 21st century.”

Ithaca resident Hillary Boucher agreed with Altier and said she is interested in looking at historical photos of Ithaca.

“I always think it’s fascinating to see the same places I sit with my kids and see people from a different era,” Boucher said.

However, she said the human interest of the pieces was what captured her attention.

“I thought it was really fascinating looking at the women packing a picnic and thinking about what they were thinking about in that time, and if they ever thought about what Ithaca would look like now,” Boucher said.

“We didn’t do this show to make money,” Millman-Brown said. “That wasn’t the idea. The idea was just to have fun, to make art.”