A tale of two majors: Sophomore works toward dual degrees while staying involved in music school 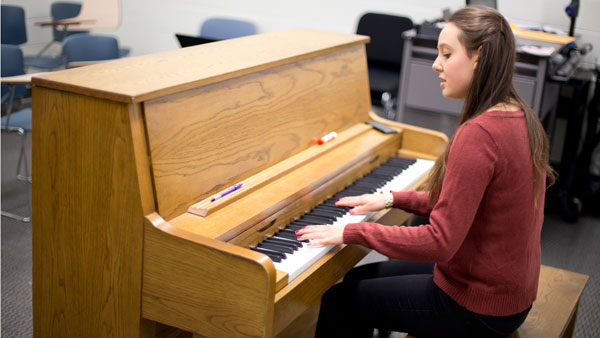 Sophomore Emily Behrmann-Fowler knows the importance of time management. The Danby, N.Y., native is the first student in Ithaca College’s history to pursue both a Bachelor of Music degree in vocal performance and a Bachelor of Science degree in theater arts management, which she will finish in 2016 and 2017, respectively.

Behrmann-Fowler said when she first approached both departments last spring about doing a dual degree, their initial response was coated in skepticism. However, she said they recognized her determination to make it work.

“No one’s ever done it, so there’s no path, so I’m kind of trying to figure it out as I go,” Behrmann-Fowler said.

It’s 7 a.m., and Behrmann-Fowler has no time to sleep in before her first class at 8 a.m. In between her 18-credit course load, shifts in the Dillingham Center Box Office and rehearsals, she can often be found in IC Square, tackling her pile of homework. She said she regularly schedules in an hour at the gym and “family dinners” with her friends in Terrace Dining Hall, all before her 11:30 p.m. bedtime.

In addition to a full course load every semester, Behrmann-Fowler also must complete a specific set of general education requirements for each degree, which is different than completing a double major.

“My mom always says, ‘You can do everything, just not all at once,’” she said. “That kind of goes for my days. I just kind of take it hour by hour, like, ‘This hour I’m working on this, and that’s what I’m going to do, and then the next hour I’m going to do this.’”

Behrmann-Fowler said she lives by the basic rules of time management: having a planner, making lists, prioritizing and taking occasional breaks.

“As much as work, work, work is important, I try to hit a balance of having down time and seeing my friends,” she said.

In order to complete two degrees with different general education requirements, Behrmann-Fowler had to map out a five-year plan, with 17.5–18-credit semesters, plus summer courses, to present to professors in both schools before she interviewed for and was accepted into the theater arts management program. She said she can usually take a general education course and have it count toward both sets of requirements, though the number of required credits in each subject area, such as natural sciences or languages, varies by school.

Behrmann-Fowler said she kept her vocal performance major because she sees how the two fields overlap. She is planning a career as a casting director and producer, and she said she hopes her vocal music training will help her make better casting decisions.

Though she has been in choral groups and in school musicals since she was six, Behrmann-Fowler said she discovered her passion for performing arts management as a senior at Ithaca High School. She enrolled in the Wise Individualized Senior Experience Program, in which students complete an independent study or project during the second semester of their senior year. For her WISE project, she directed, produced and starred in a production of Jason Robert Brown’s off-Broadway musical “Songs for a New World.” All three performances were sold out.

Patrice Pastore, professor of vocal performance, who has been Behrmann-Fowler’s voice studio professor since she was in high school, said she saw the production and was impressed with her student’s skill set not just as a performer, but as a manager. Later that year, Pastore worked with Behrmann-Fowler on a recital, which comprised classical pieces and Behrmann-Fowler’s own voice-and-piano compositions.

“She really has all of those gifts, as a director, as a performer, singer; she’s a good actress, and she knows how to put a show together,” Pastore said. “Teaching her, I just feel like I’m in the presence of a professional. It’s very hard sometimes to remember that she’s just an undergraduate.”

Since coming to the college, Behrmann-Fowler has continued to pursue her passion for musical theater. In the fall of 2012, she played female lead Ivy Robison in the Melodramatics Theatre Company production of “bare: A Pop Opera.” She is currently rehearsing for “Tale as Old as Time,” a student-produced concert of Disney music Feb. 15, in which she will be playing Princess Jasmine and singing “A Whole New World” from “Aladdin.”

Sophomore Emma Rizzo, who often goes to “family dinners” with Behrmann-Fowler, said her friend’s time management has inspired her to make use of her time between classes to get homework done.

“I’ve learned from Emily that there’s never an excuse to not get things done because you can always make time,” Rizzo said.