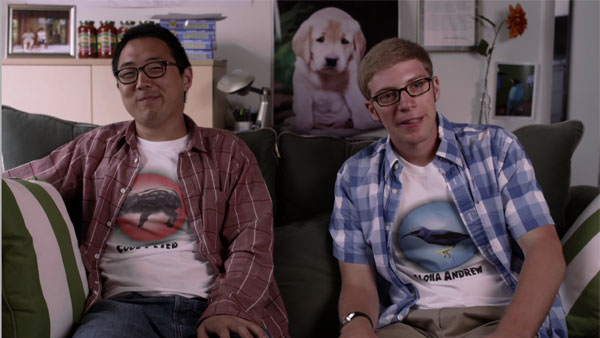 Courtesy of Kyle Kelley
From left, Nathan Min and comedian Joe Pera ’10 act in “The Perfect Week,” an adultswim.com web series starring Pera that will premiere in 2014. Pera was recently a finalist in Comedy Central’s contest “Up Next.”
By Steven Pirani — Staff Writer
Published: November 21, 2013

With three victories in the Ithaca College Annual Stand-Up Competition during his undergraduate years, Joe Pera ’10 has a knack for making people laugh. Recently, the comedian’s ability to leave a crowd laughing propelled him to scale the ranks within Comedy Central’s contest “Up Next,” the network’s first-ever nationwide talent search for stand-up comedians. The comedian ended up surviving to the finals but was beat out by fellow contestant Ali Siddiq for the grand prize in the final. The result was decided by viewer votes.

Staff Writer Steven Pirani spoke with Pera before the results of the contest were released Nov. 18 to talk about the comedian’s experience with “Up Next,” how he interacts with his audience and why practice makes perfect.

Steven Pirani: How did you climb the ladder to Comedy Central’s “Up Next?”

Joe Pera: Well, it was a contest, and they have shows that they ask me to do. The first one, I guess I did OK because I went to the next round in Boston and performed at the Wilbur Theater, which was very nice. After that round, I went to the finals, which was at Carolines Comedy Club in New York City. So it’s basically just a contest, and they decide who goes to the next round, and the final round is decided by voting.

SP: Did you ever expect to be a finalist?

JP: I never really thought about it too much. I just try not to think about it as a selection thing. I just wanted to go out and do a good show, make sure it was fun for both me and the audience, and I guess I got lucky.

SP: Is interacting with your audience an important part of your comedy?

JP: I always try and make sure I’m doing something new so that it’s always interesting for them. I don’t do traditional crowd work, per se, but I do stuff like, I did Rex Ryan jokes when I was in Boston. I know that they don’t like Rex Ryan, and I don’t like Rex Ryan either.

SP: How do you create your material?

JP: Yep, and then you try at open mics or at a show, and you refine it from there. So, yeah, I just write the things I think about that I think are funny, or that I find interesting, and then I test them out and see if other people feel the same way.

SP: Do you have any plans beyond stand-up?

JP: Stand-up is great. I love performing live, but I just finished a project actually, it’s a web series for adultswim.com, it should be coming out December or January, called “The Perfect Week.” That was very fun, very exciting and a good opportunity to work on.

SP: Do you have any advice for those in the Ithaca College Comedy Club? Anything they can do to get their names out there?

JP: It’s not so much about getting your name out, it’s just figuring out at that point what works and starting to write as much as you can, I would say. Just do as much work, because comedy at college, it is a place to try things out. Just do as much video work and writing as you can, and then you’ll [go] from there, and it will help you get better. It’s a good place to work and work with other people. Even looking back to some of the stuff I did at Ithaca, it doesn’t hold up so much looking back, but I’m glad I did it.